With Southern Miss' 2012 collapse, Tulsa is undoubtedly the class the new Conference USA. But Bill Blankenship's third Golden Hurricane squad must replace some serious play-making ability from an underrated, explosive defense; in its final year in C-USA, can Tulsa claim one more conference crown?

Share All sharing options for: 2013 Tulsa football's 10 things to know: Still the one? Still having fun?

There have been two sure things among Conference USA's current lineup of late, and one of them just went 0-12. But while Southern Miss' 18-year streak of winning seasons came to an unceremonious end last fall, the train known as the Tulsa Golden Hurricane just kept chugging right along. Tulsa has been to eight bowls in 10 years despite turnover -- Steve Kragthorpe left for Louisville in 2007, and Todd Graham actually stayed for four years before leaving in 2011 -- and despite changing identities along the way.

In 2012, Tulsa was fast-paced but quite conservative on offense, content with taking what it was given offensively and riding big defensive plays to eventual wins. The Golden Hurricane beat UCF for the conference title, and one would assume they would be among the favorites in this year's watered down C-USA as well…

Head coach Bill Blankenship has recruited well entering his third year in charge at his alma mater, and Tulsa appears to be quite well-established in anticipation of its move to the American Athletic Conference in 2014. But will Blankenship's squad take at least a temporary step backwards in its final C-USA campaign? Is Tulsa deep enough to counter what was a hefty amount of attrition following last year's 11-win campaign?

Pace is sexy and distracting. Because of pace, Tulsa's offense seemed explosive and deadly in 2012. It was not. Tulsa was pretty efficient on the ground, sure, but with a poor passing attack and a poor level of competition, the Golden Hurricane really didn't grade out very well on that side of the ball. But while Tulsa's offense was exceedingly average-at-best, the defense went from average to great over the second half of the season.

Adj. Scoring is calibrated so that an average performance results in what is an average number of points in college football. The national average in points per game last year was around 28, so Tulsa's defense, when adjusted for opponent, was about nine points better than the typical unit over the last half of the season. We can talk about the offense's general conservatism, but the bottom line is that the offense simply did what it needed to do to get out of the defense's way. And it worked. Tulsa won 11 games for just the second time in school history.

With a defense decapitated by graduation, it will be interesting to see if the offense comes to the table with a bit more of an aggressive approach in 2013. It probably has the tools to do so. 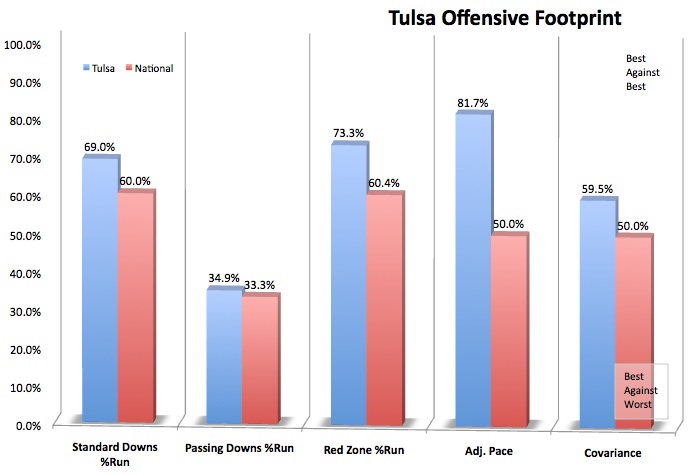 3. The purpose of pace

Pace has long been seen as a quality underdog tactic because, as long you're getting first downs and keeping the defense on the field, it can wear an opposing defense out, even if the opponent has superior athleticism.

Tulsa's offense, with a solid short-yardage back (Alex Singleton) and Top 50 rushing efficiency, certainly could have been worse in this regard. But the pace didn't really seem to have much of an effect on defenses -- Tulsa's best offensive quarter was the first (52nd in Q1 S&P+); it got progressively worse from there (67th, then 97th, then 106th).

Again, Tulsa's offense didn't have to do much because of its dominant defense. These things sometimes work hand-in-hand. But if forced to be more effective and explosive in 2013, can this run-first offense do its job, especially considering Singleton is no longer around to move the chains?

4. Giving the ball to the wrong guys

It is foolish, sometimes, to draw stark conclusions based on per-play, per-carry, or per-target averages. Sometimes that backup running back with a great per-carry average, had that average because he was a backup and was in no way the focal point of the defensive gameplan. The guys who touch the ball the most, probably do so for a reason.

That said, it is difficult to completely justify the number of touches Alex Singleton, Keyarris Garrett, and Willie Carter got in comparison to their infinitely more explosive backups. Singleton was, again, solid in short-yardage, and he had the 24 rushing touchdowns to prove it. He was the thunder to the lightning combination of Trey Watts and Ja'Terian Douglas. But did he really need 14.4 carries per game? Watts and Douglas were wonderfully explosive (quarterback Cody Green wasn't so bad himself); Douglas' 10.3 Highlight Yards per Carry (the number of yards you get when the offensive line does its job and gets you to the second level) was second in the country, behind only Kent State's Dri Archer, among players with at least 130 carries. He and Watts did still see 23 carries and 3-4 pass targets per game; they got their touches. But Singleton also got a few more than he perhaps needed. It will be interesting to see how Singleton's carries are divvied out among Watts, Douglas, sophomore Zack Langer, and intriguing redshirt freshman James Flanders.

Still, the running game was fine. It was the passing game where things were truly out of whack. In Jordan James and Thomas Roberson, Green had a pair of semi-efficient, explosive targets, a pair that combined for a 58 percent catch rate and 15.1 yards per catch. They were targeted about 8.6 times per game. If you have a couple of possession receivers to pair up with guys like this, your passing game can hum. In theory, Keyarris Garrett and Willie Carter fit that mold (10.6 yards per catch, 8.3 catches per game), but their catch rates were abominable (combined: 52 percent). Carter in particular had a dreadful combination of a 48 percent catch rate and 7.8 yards per catch; Tulsa's leading receiver (66 percent catch rate, 14.2 yards per catch) in 2011, Carter just never got it together last year, and possession receivers are only useful if they are catching the ball. Carter is gone now, and it might not hurt Tulsa to distribute his 7.3 targets per game to others.

In 2012, Tulsa had a seasoned, experienced line that protected the passer as well as anybody but wasn't very steady in run blocking … for an offense that was very much a run-first attack. Losing three all-conference linemen who combined for 90 career starts can't be considered a good thing, but is it that bad? If the replacements sacrifice a little pass-protection proficiency for run blocking, Tulsa might be able to transition to some new starters with little issue, especially considering Blankenship has recruited quite well up front. 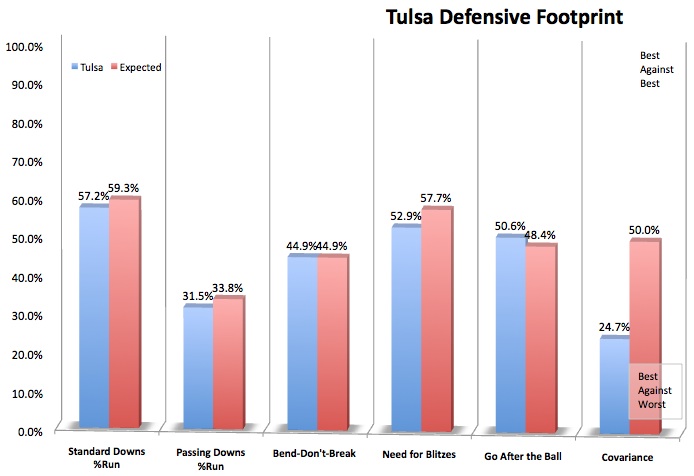 6. A lot of production gone

Tulsa's defensive line ran the show in 2012. Tulsa's top six linemen recorded 55 tackles for loss, more than 21 entire FBS defenses did. This was a fierce, deep unit, capable of generating a hell of a pass rush without blitzing (and nearly unstoppable when middle linebacker DeAundre Brown was also coming after the quarterback) and standing up against run blocking as well as almost any mid-major line.

Let's just say that depth will be tested in 2013 with the departure of Brown and all four starting linemen. Again, Blankenship has recruited well, and there are candidates for breakouts throughout the front seven. But wow, is this a lot of production for one team to lose.

7. A lot of potential returning

It bears mentioning that Jared St. John, the biggest star on a line full of stars, had just 2.0 tackles for loss and 10.0 tackles in 2011. It appeared that Tulsa might struggle to replace 2011 star Tyrunn Walker (13.5 tackles for loss, eight sacks), and St. John not only replaced him, but surpassed him.

It also bears mentioning that 13.5 of the 30.5 tackles ends Brentom Todd and Derrick Alexander made in 2012 were behind the line of scrimmage. Their big-play rate was quite high, and while they will have to prove they can make the run-of-the-mill plays, too, one cannot say there is not potential here.

Honestly, the biggest question mark could come at defensive tackle. Daeshon Bufford and Derrick Jackson were both best-of-both-world tackles last year, making a large number of plays and standing up well to short-yardage run blocking. Returning tackles made just 12.5 tackles last year (though, again, four of Derrick Luetjen's 11.5 tackles were TFLs), and there are no former star recruits waiting for their turn. Depth there could be an issue.

Defensive coordinator Brent Guy has attacked from every conceivable angle over the last couple of years. Tulsa has made 170 tackles for loss over the last two seasons, and while the line accounted for a lot of that in 2012, safety Marco Nelson chipped in four of his own. Combine that with some on-the-ball aggressiveness (Nelson and since-graduated safety Dexter McCoil combined for 19 passes defensed), and you get the impression that this unit had plenty of aggression and athleticism of its own.

That said, the secondary's margin for error vanishes in 2013. Not only must Guy find replacements for McCoil and both starting cornerbacks, but the unit must also account for the fact that the pass rush might suffer a bit as well. Guys will have to cover better, and for longer. As with everywhere else on the defense, there is an interesting load of redshirt freshmen ready to pitch in, but the odds are good that the pass defense will regress a decent amount this fall.

We don't know how much the defense will regress, and we don't know how the offense might respond to having to carry more of the load, but we do know that the special teams unit still has one of the scariest return games in the country. And we know that Tulsa will need whatever field position advantage the return game can derive.

I rarely bet against a proven program. Teams that are the best, for the longest time, tend to be more capable of handling year-to-year turnover. But it does take a leap of faith to assume that Tulsa will be able to defend its Conference USA title despite what it loses, both in the trenches and throughout the defense.

Tulsa had one of the most underrated defenses in the country last year; if it regresses only a little bit, and if the offense can pick up the slack (for what it's worth, I'm more confident in the latter than the former), then Tulsa could still be considered the class of Conference USA. But with Rice, Marshall, and East Carolina all looking experienced and interesting, and with teams like Southern Miss, Louisiana Tech, and Middle Tennessee looking like serious wildcards, the road to one final C-USA title could be pretty bumpy.

Here's how I see the C-USA balance of power now that we are through with all 14 team profiles. Four stand out, followed by a load of teams that could threaten for bowl eligibility with a few breaks.