UTSA has played 22 games in its existence, and it has already climbed a couple of rungs in the realignment ladder. Larry Coker's Roadrunners begin life in Conference USA with an interesting, experienced offense and a defense that needed a lot of help from JUCO recruiting.

Two years ago, UTSA had yet to play a football game. The Roadrunners had a coach, a stadium, and some pretty impressive ambition, but everything was on paper. Now, after 22 games -- 12 wins, 10 losses -- here they are in what I called Double-A ball on Monday.

I spoke with UTSA head coach Larry Coker last month, and I asked him just how in the heck you go about building a program with no track record. "The big thing about it is trying to set the culture," he said. "You don't have the older players to lead. Our coaches have to set that culture -- what we expect and how we expect it. Not every player buys in, and you have a lot of turnover for a while."

Coker said he spoke with former South Florida head coach Jim Leavitt, who underwent the same building-from-scratch-and-moving-up-quickly process a decade and a half ago, and he said the same thing.

"Kids aren't dummies," Coker says. "If they see things that work, it makes them more receptive."

That makes it difficult when your program quite literally hasn't won before. That said, things could be going a lot worse for UTSA. Again, in their first 20 games in existence, the Roadrunners have won 12 times. They played eight FBS teams last year and beat four of them. Yes, they were holding their own in the weakest overall FBS conference, the WAC, and yes, their wins came against New Mexico State (123rd out of 124 in the 2012 F/+ rankings), Idaho (120th), South Alabama (118th), and Texas State (99th). Yes, they were 0-4 versus bowl teams (average score: Opponent 46.2, UTSA 20.5). Yes, there was some luck involved (UTSA was 4-0 in one-possession games). And yes, they finished 116th in the F/+ rankings. But they immediately found themselves ahead of the game against teams that, well, had been around for more than two years. Coker has made up some serious ground on the rest of the football-playing world, and at this stage, he doesn't need to worry about that "no older players to lead" thing. A vast majority of last year's squad returns in 2013

* The two games versus Division II teams were not counted as part of the Adj. W-L record, nor were they counted in the rankings or the rushing and receiving stats you find below. They were, for all statistical intents and purposes, exhibitions.

Again, we probably shouldn't think too hard about this. In its provisional FBS season, UTSA ripped off a five-game winning streak to start the season (yes, only two were against FBS teams) and finished with a three-game winning streak. That's impressive. And by all accounts, the offense was perfectly decent. The Roadrunners were held under 24 points twice all season, and Utah State's defense was so good that scoring 17 points against the Aggies was impressive in its own right. Eric Soza is a legitimately solid quarterback, and he had a pretty good junior season. 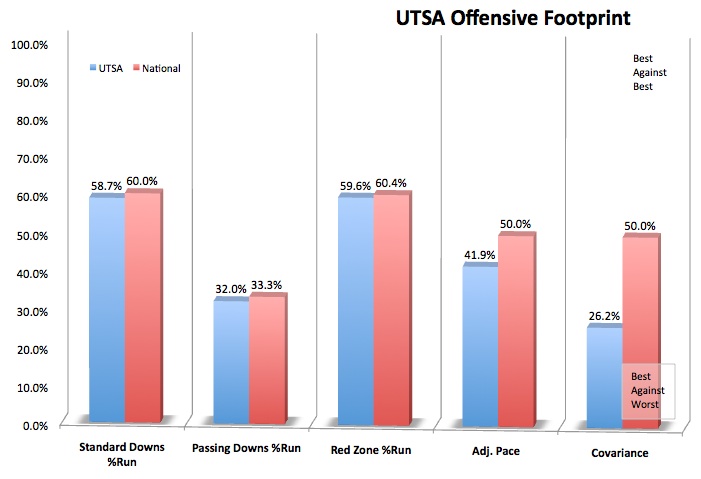 He is an impressive (and selective) runner, and he is infinitely more prone to throw the ball away instead of throwing picks. Plus, he appeared to raise his game on passing downs. He has started almost every UTSA game -- he missed the SJSU and Utah State games last season -- and his high points in 2012 were ultra high. He was 17-for-24 for 206 yards and two touchdowns and rushed for 51 yards against Georgia State, he was 23-for-41 for 314 yards and four touchdowns against Louisiana Tech, and against Idaho, he was 23-for-36 for 232 yards and rushed for 89 yards and three scores.

Oh yeah, and he doesn't take sacks. Like, almost none. His 1.1 percent sack rate was infinitesimal; the stereotypical dual-threat quarterback is more likely to scramble and throw the ball away instead of stepping into the pocket and forcing a throw, and while incompletions are not good, they're better than turnovers and sacks. Soza was one of the FBS' best quarterbacks when it comes to avoiding catastrophic mistakes, and with an experienced supporting cast, there's no reason to expect something different in 2013, though he will be facing a few more decent defenses.

Soza was also more than willing to dump to his running back to keep the ball moving forward. And when Evans Okotcha was in the backfield, that was a particularly useful option. Okotcha split carries with David Glasco II in 2012 -- they combined for about 15 carries per game -- and saw about three targets (and two catches) per game as well. And in his 119 intended touches (carries and targets), he averaged a lovely 5.8 yards. Okotcha and the other backs and tight ends gave Soza some efficiency options (combined catch rate: 78 percent), which made up for a rather inefficient set of receivers. Players like Kam Jones and Kenny Bias were able to get downfield at times, but the catch rate for the receivers will need to improve. Faster defenses will track down Okotcha and the backfield options better, and at some point, UTSA will need to actually strike downfield.

Soza's own ability to avoid sacks certainly played a large role in UTSA ranking third in the country in Adj. Sack Rate. There is no doubting that. And UTSA's line certainly proved lacking when it comes to opening holes for its backs. Defenders were pretty consistently able to slice through the line and stop backs for losses. Still, you have to like where this line is headed.

Growing pains were expected -- as you see above, the six returning players with starting experience were all sophomores or younger last year -- but the experience is piling up. UTSA enters 2013 with three two-year starters, and barring attrition or injury, it could enter 2014 with three three-year starters. The line is headed in the right direction, and it will get further help from Soza this fall. 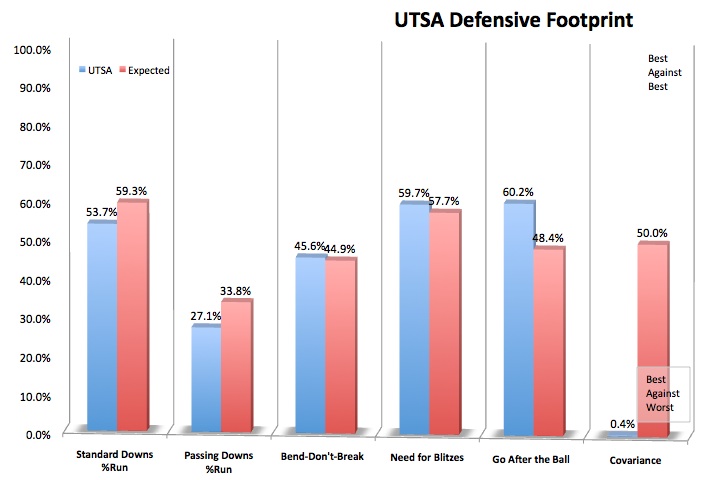 Coker brought on small school veteran Neal Nethery to install his intended 4-2-5 defense two years ago; the move made sense considering the defense's emphasis on speed (and the emphasis on passing among so many Sun Belt and Conference USA teams). But we'll just politely say the installation is still in process. UTSA had the worst passing downs defense in the country, generating a mediocre pass rush and offering no resistance whatsoever in the secondary. UTSA was able to swarm to ball-carriers and limit big plays on the ground for the most part, but the Roadrunners were simply unable to get off the field when they created opportunities to do so.

They were also unable to do any damage whatsoever if they didn't have a speed advantage. Their defensive Covariance -- a measure intended to figure out who played their best games against good competition and who played their best against their worst opponents -- was on the far "Best Against Worst" end. They allowed just 167 yards to NW Oklahoma State, 209 to Texas A&M-Commerce, 307 to Georgia State, 308 to South Alabama, and 350 to New Mexico State. Not bad. They picked off nine passes in those games and allowed an average of 61.2 rushing yards per game against those teams. But then the real games started. UTSA allowed 483 yards to Rice, 522 to Utah State and 537 to Louisiana Tech, picking off just four passes the rest of the way. Facing real opponents didn't treat the Roadrunners very well.

In theory, experience could help with that. Becoming more aware and adept in your roles with this unique defense could help, especially in the passing game. But one has to question the overall talent level of the defense; lord knows Coker and his staff did: They brought in 10 defensive backs in their 2013 recruiting class.

7. Falling victim to the counterpunch

You'll rarely see a team so good agains the run on standard downs (22nd in Standard Downs line yards per carry) and so awful on passing downs (120th). Knowing what we know about the pass defense, that tells me UTSA felt the need to over-pursue on passing downs, desperately trying to get to the quarterback before he could pick them apart. That leaves you vulnerable to both draw plays and quarterback scrambles, and the numbers suggest that this decimated the Roadrunners. They couldn't even get away with a bend-don't-break approach to pass defense, and aggression hurt them just as much. With the top three ends returning, along with three of the top four tackles, the experience level should help, as should the addition of two junior college transfers, including enormous tackle Brian Price. I don't know how good this line will be, but it should at least improve slightly from last year, and a little help from an improved secondary couldn't hurt.

8. A blood transfusion in the secondary

None of this guarantees improvement, mind you. But it does point to the simple fact that UTSA knew what its biggest weakness was last year and took drastic steps to improve it. If players like Broussard and Okotcha can make an immediate impact alongside players like safeties Triston Wade and Nic Johnston, and if the remaining recruits can offer some level of depth at cornerback -- UTSA just had none whatsoever last year -- then improvement should follow. And if that leads to less desperation up front, then the overall defense could improve by quite a few spots in the rankings. It can't really go any lower.

9. Triston Wade is a keeper

Despite the secondary's general incompetence, Wade still earned second-team all-WAC honors in 2012, and not only because he logged a lot of tackles. Tackle totals can fool you sometimes -- you cannot immediately tell whether those tackles were of the play-making variety or of the "my defense sucks, and somebody has to bring the guy down" variety -- but Wade showed solid play-making ability, defensing 11 passes (four picks, seven passes broken up) and forcing four fumbles. Nic Johnston wasn't so bad himself. Again, the biggest issue was at cornerback, where Okotcha could help immensely if he is ready to roll.

UTSA has played eight FBS opponents in its history. In 2013, the Roadrunners will play 12, including seven projected in the Top 92 of the preseason F/+ rankings and four in the Top 60. Coker's team is almost guaranteed to improve -- teams that return 19 starters almost have no choice, especially considering what returns from the two-deep -- and with home games versus Rice, UAB and Tulane and winnable trips to New Mexico, UTEP, and North Texas, the win total could remain reasonably nice. But the defense probably hasn't sealed all of its cracks, and the receiving corps probably still won't be able to help out Eric Soza as much as he needs it to. UTSA is a work in progress, but of course it is. The Roadrunners are going to struggle in 2013, but they are ahead of schedule, and they should be able to hold their own for at least a good portion of the season.