2013 Colorado State football's 10 things to know: Build it, then sustain it

Jim McElwain's first season as Colorado State's head coach could have gone a lot worse. The Rams actually played relatively well down the stretch, and after battling injury and turnover, the roster is quite a bit more experienced and healthy in 2013. Can CSU actually build and maintain momentum for the first time in quite a while?

Share All sharing options for: 2013 Colorado State football's 10 things to know: Build it, then sustain it

Building and sustaining momentum has been a nearly impossible task for CSU; late in 2012, as former Alabama assistant Jim McElwain finished his first season in charge, the Rams actually began to look pretty good. Can the Rams sustain that late momentum when 2013 begins?

2. Keeping your first stringers on the field

Here's a link to Colorado State's 2012 statistics. Click on it, scroll down to the individual stats, and count the number of players who actually played all 12 games for Colorado State last year. The three leading rushers played in nine, nine, and eight games, respectively. The two leading passers played in six and six. Only two defensive backs played in 12 games. The offensive line cycled through five different combinations of starters. And this came on top of CSU losing its quarterback and pass rush (to transfer and expulsion, respectively) in the offseason.

That the Rams were able to generate any momentum at all despite shifting personnel was impressive. And this season's personnel issues are next season's depth -- CSU now returns two experienced quarterbacks, three interesting running backs, six offensive linemen with starting experience, and basically the entire two-deep from what was a surprisingly strong secondary. If November's Colorado State was the real Colorado State, then the Rams could truly have a chance to improve overall in 2013. But that's still very much an if.

That said, like New Mexico, CSU truly did improve down the stretch last fall.

The improvement wasn't drastic, but it was measurable. The defense improved slightly (the improvement is more significant if you write off the Boise State game as an outlier), and the offense, with a redshirt freshman behind center, improved by about three adjusted points. And they did it over a long enough period to consider it potentially sustainable. 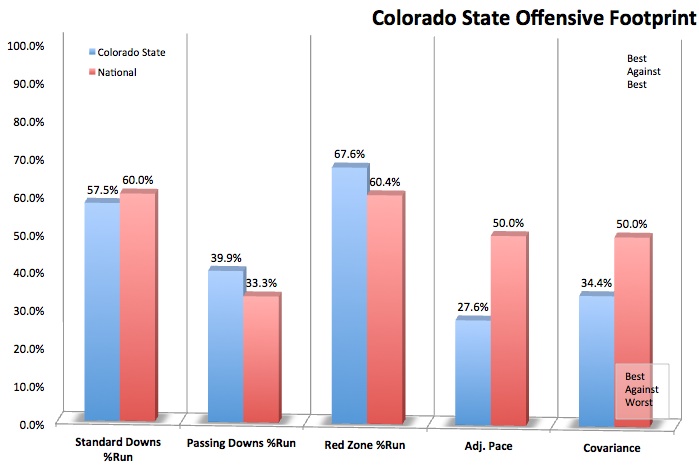 4. For the love of all that is holy, stay on schedule

There is a reason why I break things into standard downs and passing downs. Almost every team in the country performs better on first downs, second-and-6 or fewer, or third-and-4 or fewer. It just makes sense. The defense cannot load up against the pass and is forced to react to what you are trying to do; on passing downs, your options are severely limited.

That said, some teams are more limited on passing downs than others. Colorado State's standard downs offense wasn't good, by any means, but it was reasonably competent. The Rams had a Top 80 offense, showing balance and decent big-play ability, on favorable downs. And if they fell behind schedule even a little bit, the drive ended almost instantaneously. CSU had the third-worst passing downs offense in the country, leaning on the run to mitigate damages and trying simply to survive and flip the field with its solid punter. When your quarterback for the first half of the season cannot avoid sacks, and when your quarterback from the second half of the season is a freshman (and your leading running back is a freshman, and your leading receiver is a sophomore), you tend to play it safe. And if you have a good defense, this is fine. CSU didn't, however, and the Rams' hopes for staying in a game hinged on staying on schedule.

With infinitely more experience this time around, CSU might open up the playbook a bit more. But as you'll recall from Jim McElwain's days with Alabama, he probably isn't going to go into super-aggressive mode anytime soon. CSU's potential success in 2013 will likely come because it is even better at avoiding passing downs, not because it is better at digging out of holes.

Going young doesn't typically solve problems, but for CSU in 2012, it almost did. For most of the first half of the season, CSU oscillated between Garrett Grayson (who broke his clavicle in the Air Force game) and senior M.J. McPeek. But when McPeek got hurt against San Diego State, Smith came in and completed 18 of 22 passes and earned the starting job. He threw a few too many interceptions, really, but he had a higher completion percentage and a much lower sack rate than either Grayson or McPeek, and CSU's offense improved overall with Smith in charge. To be sure, Smith had some ups and downs -- he threw two picks versus Hawaii and completed just four of 11 passes versus Boise State -- but he was a clear improvement over CSU's other options.

Of course, this spring Grayson battled Smith to at least a tie in the QB battle, so perhaps we shouldn't anoint Smith as CSU's savior just yet.

The winner of the quarterback battle will have a reasonably interesting, deep set of skill position players around him, but either Smith's or Grayson's biggest asset could be the five beefy guys in front of him. Grayson will need to learn to avoid playing hero on passing downs -- CSU's awful passing downs sack rate was mostly the result of Grayson's time at QB -- but the line was decent in run blocking and showed solid pass protection when Smith was behind center. And as mentioned above, last year's shuffling is this year's depth. Weston Richburg was a second-team all-conference pick in 2011 and was the steadiest piece of last year's rotating line. 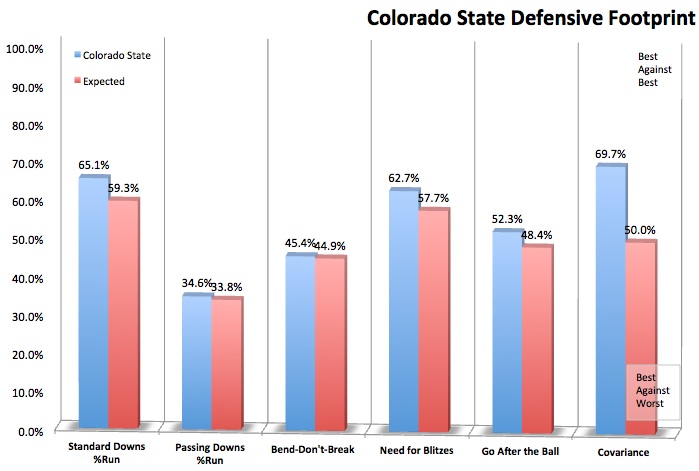 7. There's a reason why opponents ran

Despite turnover up front, CSU showed a decent passing downs pass rush, and an ultra young secondary was rather successfully aggressive for most of the season. Colorado State's pass defense, overall, was a major strength for the Rams and should be again in 2013. Shaq Bell and two youngsters make for one of the better cornerback units in the conference, and sophomore safety Trent Matthews is a hell of a ball hawk.

That's great and all, but until CSU can at least pretend to stop the run, the pass defense will only be so much of a strength. The Rams got pushed around up front, made almost no plays in the backfield, and didn't hold up well on either standard downs or passing downs. The Rams were reasonably decent at preventing opportunities for the running backs (i.e. runs of more than five yards), but they allowed you to gain five yards any time you wanted to.

8. Bringing in the reinforcements

CSU loses three of its top four, and four of its top seven, from last year's two-deep on the line, but let's just say that "top" is used loosely here. If your line stinks, you don't really miss the guys you lose as much. End Shaquil (yes, that's how it's spelled) Barrett is a potential playmaker, but McElwain certainly did his best to upgrade the overall talent level up front. Three junior college transfers -- end Martavius Foster and tackles Terry Jackson and LaRyan King -- join the mix, as does a three-star freshman in end Austin Berk. One should never assume that newcomers will turn a unit around, but let's just say that if these four are ready to make a contribution in the fall, there will be little resistance working up the depth chart.

9. Special teams is a strength

Pete Kontodiakos was a first-team all-conference punter, and his nearly 47-yard punting average tells you why. In theory, he could be missed, but I still like CSU's special teams unit for a couple of reasons. First, look at CSU's Net Punting ranking: 89th. Kontodiakos may have had a cannon for a leg, but it appears he quite frequently outkicked his coverage. CSU opponents averaged more than 12.0 yards per punt return, and that obviously negates a lot of whatever field position Kontodiakos was able to derive. Second, everybody else of importance returns for CSU's special teams unit, including accurate (and not-so-frequently used) kicker Jared Roberts, and solid return man Joe Hansley (punts) and Thomas Coffman (kicks).

Aside from a glitch at Boise State (hey, it was their first trip to the blue field), Colorado State was downright solid through most of the final five weeks of the season. The Rams weren't great, mind you -- they did need two fourth-quarter pick sixes to hold off a bad Hawaii team, and they did lose to a bad Wyoming team (with help from a 99-yard pick six) -- but there's no denying that the level at which they finished last season was the highest level they had seen in a while. And if they can re-establish that level in 2013, they could win some games. They play host to two teams projected 100th or worse, they visit three others, and they play a sixth (Colorado) on a neutral field. Bowl eligibility is probably too lofty a goal right now, but if they were to only win four games again, that would still represent their best two-year win total since 2008-09. You've got to start somewhere, and Jim McElwain's first season saw just enough improvement (despite the personnel) issues to give hope that, in another year or two, Colorado State could find a level of play it hasn't seen for quite a while now.