Update, July 1, 2014: All this is official now, pending just a couple more moves. The TV realignment era is now juuust about completely dead.

Conference realignment is not over, despite the ACC's members agreeing to pledge their TV money to each other for the next 14 years. And it is fitting that it was TV money that provided stability, seeing as it was the college sports TV boom that broke the country apart all along.

But at the major, sport-shaping, rivalry-shattering, megabucks-chasing level? It's over for now, three and a half years after it began. Things that could still happen include BYU or Boise State or Cincinnati to the Big 12 (despite the Big 12's monthly denials) or someone scooping a couple mid-majors or the Sun Belt doing something EXTRA wacky. Three of the other four power conferences have media deals similar to the ACC's, and nobody's leaving the SEC, meaning all that's left are aftershocks.

The post-mortem: Lots of schools and lots of white men got rich, while some got a little less rich. The spreadsheet here is up to date on who's ending up where. For years now, television markets have mattered more than players and championships and fans, and now we get to oh-so-briefly pretend that never happened.

Now that we've agreed on that, Arkansas will join the Pac-12 tomorrow.

With all that said, let us recount the most enduring and ridiculous moments and themes from the great 2009-2013 conference realignment land grab.

Pulled limb from limb by cats in an alley after screaming gibberish about BYU's many Davey O'Brien winners. Before the end, it got so low that the FCS Big Sky talked ish.

A history of major football conferences that have died.

And that's all it did. For the past three years, the realignment END GAME has been this:

Four 16-team conferences, each equipped with resources so insanely beyond the rest of the sport's that they break away from the NCAA, setting up a NFL somehow affiliated with universities. John Calipari was down. And then the playoff struck, increasing the loomage. It was as ominous as a movie trailer and just as fleeting.

Bill Connelly, for one, called the whole thing unlikely all along. But yes, there's a new END GAME already, and this one's a little harder to avoid.

This is the only stunt in this entire circus we need to remember.

The list of bad things to happen in the Big East's theater of combat over the last four years would fill a gruesome war novel all its own. This is a great place to start, though.

5. There was a Texas-to-the ACC rumor.

There was a Texas-to-the-Pac-12 rumor, sure. That one darn near happened ... twice. And that one included an entire Oregon Trail traveling party worth of Texas' friends, too. But that was not a Texas-to-the-ACC rumor.

In some alternate dimension, we're watching the country's richest and most advantaged program play football at Wake Forest, Syracuse, and Duke in the same season.

6. The SEC accidentally announced Missouri a week ahead of time.

Including a writeup by CBS Sports' Tony Barnhart, who defended to Paul Finebaum the fact that he participated in planned PR for a conference by saying, "I was asked about Missouri in a what-if. No one gave me inside information."

Nobody really cared. CBS is the SEC.

Work of questionable impact and work meant to benefit absolutely nobody but Baylor, but work.

The Bears are dedicated at litigation and politics and such. They used political ties to beat TCU and SMU into the Big 12 in the first place, but then tried to beat Colorado into the Pac-12, lobbied against anyone (including Colorado) leaving, lobbied against Oklahoma and Texas A&M leaving, and essentially threatened to sue the SEC.

Somebody made a shirt at some point: 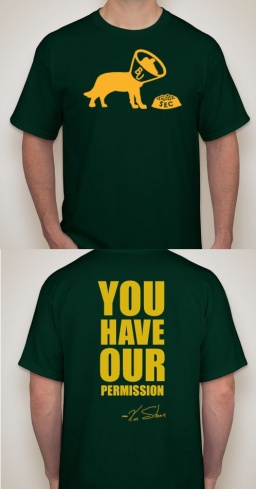 8. The ACC released a meaningless solidarity statement out of nowhere.

And five months later, followed through.

I probably read this once a month.

Source very close to the situation at West Virginia says the Big Ten has its hand on UConn's fanny and is engaging Project: Squeeze. It's a done deal.

Done. Deal. Ink is in the inkplace.

Over on my Twitter feed, which you can follow, I've been engaging with some folks from the ACC camp, who feel Oklahoma State is set to pop. Too soon. If you follow me, you know it's the wrong OSU being discussed, based on my knowledge of the inner workings at West Virginia. Follow me to learn what O stands for. I'll show you if you follow me.

This is the big one. Plugged-in West Virginia booster says the SEC is joining the Big 12.

Fait accompli. I swear upon the souls of my descendants through the year 3131.

Hang on. Situation changing. Emerging intel from West Virginia. RSS me for more on Louisville.

It got even weirder on message boards. You can only imagine.

In the end, the only teams to newly go it alone were BYU, Idaho, and New Mexico State, with varying degrees of intent.

Four here, plus this.

This ranks as one of the four or so most frequently denied conference realignment things, along with the Big 12 on more than 10 teams, the SEC on expanding from 13 to 14, and WILD CARD.

14. The Big 12 and Big East considered a merger, as did the Mountain West and Conference USA.

Oh, you forgot about that first one? Elsewhere, the MOUNT USA dream lasted many months, but it never worked out.

They've won a combined 61 games since 1932* and happen to play in or near large cities with many televisions.

* ODU had a program decades ago, which it restarted in 2009.

16. All of this forced my friend Martin Rickman to lose his mind.

SB Nation's own has spent about a year now dwelling in a Twitter world of desperately friendly good vibes and earnest assertions of ACC kinship and warmth. Here was his manifesto, released just after Notre Dame sort of joined the ACC and sort of didn't.

You should follow him because he is a neat and funny guy.

17. Official conference websites lost track of which team was where.

This was just one example of the phenomenon: 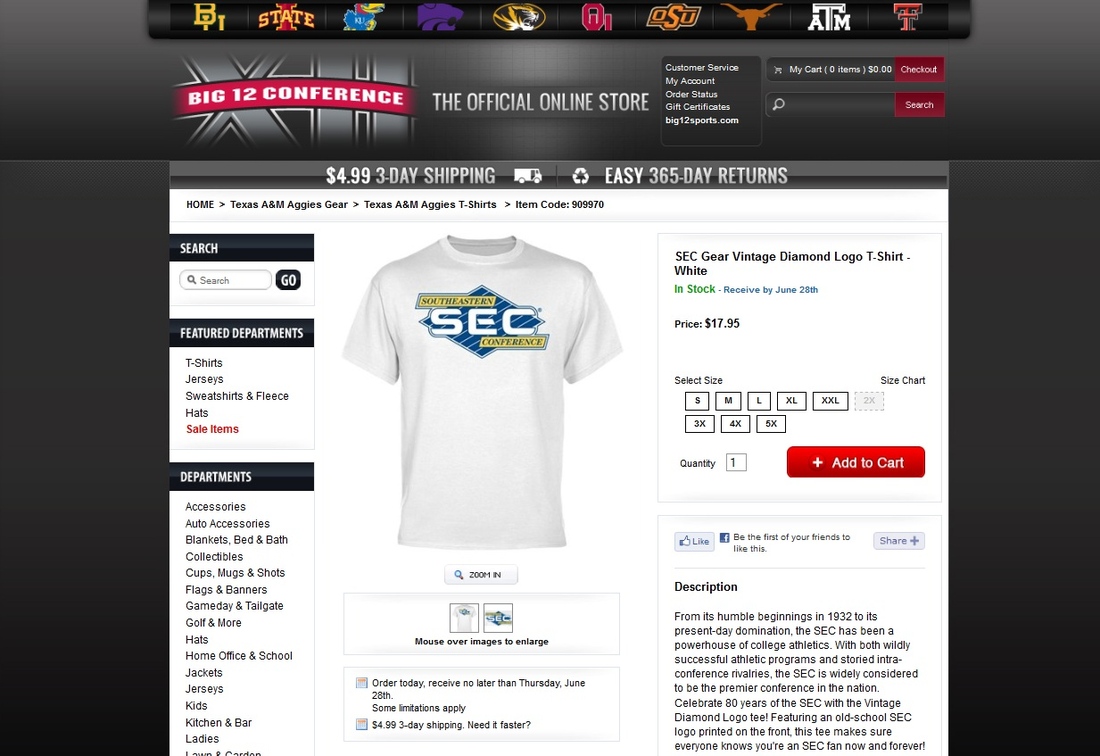 18. Memphis publicly aspired to the SEC.

Geographically, sure, though the Tigers have one of the country's worst football programs and would open zero TV markets. I was looking up some figures to throw at you about just how bad Memphis football has been, but then I just re-read the title of this section and became very sad or happy all over again; feelings are hard right now.

Also, Hawaii made its case for the Pac-12.

Also, there was a Houston Big 12 rumor.

Also, there was a NIU-to-the-Big 12 movement.

Also, Air Force counts the Big 12 among the many conferences it reportedly almost joined.

Make up a Big 12 rumor: it probably happened.

20. The Big East accepted the aforementioned Memphis and Tulane.

The pinnacle of pandering to television markets was a BCS conference swinging for the city of New Orleans by adding Tulane athletics. This was among the last snips that split the conference in two and completely broke open any remaining notion of any of this making sense.

Forget that earlier tweet that #SouthernMiss fans should be patient... Tulane goes to the Big East ... go crazy folks

But Navy, which has been independent for even longer, will.

Did you know only one conference in all of college sports includes a team that is more popular than the rest of its conference rivals? It's true. It's not at all true, but please humor Florida State fans.

The FSU-to-the Big 12 debate consumed like all of May and June 2012 after this happened.

23. Approximately one person didn't lie to you.

A year before being fired, LSU president John Lombardi said, "Once an athletic conference is expanded by the addition of athletically effective institutions with strong television markets, then the members talk about the relative wonderfulness of their members' academic profiles."

24. The Big Ten started all this more or less on purpose.

Then ended up with Rutgers and Maryland.

In December 2009, the Big Ten announced it would expand in the next year or so. Announced! This served as a lesson on how not to realign, as programs began openly pleading for a spot. The next time the Big Ten grew, it did so in total silence, dropping the bombs in the middle of a college football Saturday.

Big 12 members reacted to the Big Ten's declaration, with Nebraska's exit cracking the seal. The SEC and Pac-12 capitalized, also taking on Big 12 members. The ACC gobbled up some more of the Big East because big membership numbers are bigger than little membership numbers and the ACC likes to do things. The Big 12 restocked from the Big East, technically. The Big East digested Conference USA. The Mountain West and others killed the WAC because it was there. The Big Ten went all MEDIA MARKETS. The ACC added a good athletics program, to everyone's wonder. The Big East kept doing its thing. Conference USA stomped on the Sun Belt. The shockwaves reached into FCS, where the SoCon surrendered the subdivision's two best historic programs.

The MAC merrily chugged along all by itself, whistling a zippy little tune.

25. Rivals got too mad at each other to play sports.

No matter how much Texas AD DeLoss Dodds likes the sound of his own sass, Texas will play Texas A&M some day. Kansas will play Missouri, just as Pitt will play West Virginia. I don't know if they'll ever again play every year. We salvage what we can.

We lost some things, but it could've been far worse.

What's your favorite memory from this stupid era, and what dumb thing do you think will happen next?