The last UNLV coach fought through three two-win seasons, then won five in his fourth. Bobby Hauck has the "two-win seasons" part covered, but can an experienced, deeper Rebel squad actually break through in the win column this time around?

Share All sharing options for: 2013 UNLV football's 10 things to know: The clock ticks

Mike Sanford was UNLV's head coach from 2005-09. After three consecutive two-win seasons to start his tenure, Sanford engineered back-to-back five-win seasons, complete with clear statistical improvement (the Rebels averaged an F/+ ranking of 103.0 through his first three seasons but ranked 84th and 89th in 2008-09), but was fired anyway. UNLV replaced him with Bobby Hauck, and the process began all over again. In three seasons, Hauck has gone 2-11, 2-10, and 2-11.

Despite the similar record, however, Hauck's third UNLV team was easily his best. UNLV improved from 117th to 103rd in the F/+ rankings (not good, but clearly better), showing decent progress on both offense and defense despite what was still a clear lack of depth on both sides of the ball. An inability to close games prevented the record from improving, but for the first time since he left Montana for Las Vegas in 2010, Hauck has actually built a bit of momentum. If Sanford's tenure is any indication, however, he's only got a year or two left to break through and take the Rebels to their first bowl game since 2000. In many FBS jobs, he wouldn't have gotten a fourth season, but UNLV is forced to have at least a little bit more patience than some of its peers. This is a hard job.

In recent years, UNLV's conference rival Wyoming has made a habit of stocking up on close wins one year and running dry on them the next. The Cowboys went 6-0 in one-possession games in 2009 and made the New Mexico Bowl despite an F/+ ranking of 101st, then went 2-3 in such games the next year, finished 3-9, and ranked 108th. In 2011, they once again got hot (5-0 in one-possession games) and once again made the New Mexico Bowl (F/+ ranking: 104th); and in 2012, the pattern continued (3-4 in such games, 4-8 overall, 100th). In four seasons, Wyoming has barely been better than UNLV, but it has two bowl trips to show for it.

UNLV is hoping that it gets its own close-game hot streak because 2012 was pretty cold. The Rebels went 1-5 in one-possession games, thanks in part to a minus-3.4 point margin (per game) in turnover luck. They turned 60 passes defensed into just nine interceptions, and it cost them. Three tight losses to start the season put the Rebels in a whole out of which they could not dig. One extra bounce per game in their favor, and they might have started 4-0.

Regardless of the turnovers, UNLV's inability to close games pointed at a lack of depth we will explore below. The defense went from mediocre to bad throughout the course of each half, and the offense was demonstrably worse in the second half of games. That simply has to change if Hauck is ever going to break through. 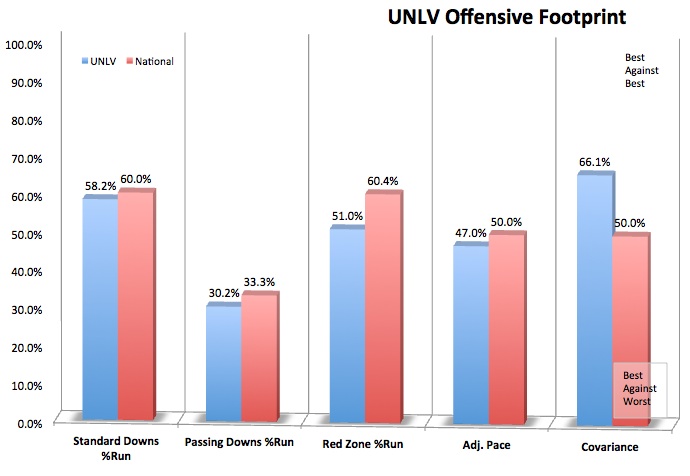 There was another factor in UNLV's inability to close out games: closing out drives. The Rebels had one of the 10 worst red zone offenses in the country, quickly falling behind schedule and failing to come up with points. They averaged just 5.20 points per trip inside the opponent's 20 (88th in the country) and 6.26 points per trip inside the five (105th), and against a schedule of mostly defensive pushovers, that simply wasn't good enough. UNLV has a big, solid running back in Tim Cornett and big line that was good at avoiding negative plays in the run game. The Rebels probably passed a little too much near the end zone, but no matter the cause, they simply didn't produce enough points from the opportunities they had. With an infinitely more experienced offense in 2013, that has to change.

Building connections is important. For Hauck and his staff, a connection to Galena Park's North Shore high school in Texas has paid off significantly. Both Cornett and leading receiver Devante Davis are North Shore graduates, as is incoming tight end Jacobie Russell. Receivers coach Cedric Cormier is a North Shore grad (and legend, apparently), and the positive experiences and production for Cornett and Davis could continue to pay off for the Rebels.

They need help, though. Cornett's backfield cohort Bradley Randle is gone, and while Davis, Marcus Sullivan, and Anthony Williams all produced decent per-target averages, there was no standout here. UNLV had solid big-play ability in 2012, especially from Cornett (5.8 highlight yards per carry) and Davis (14.0 yards per catch), but efficiency and consistency were major issues. Northwestern transfer Adonis Smith might help, but he won't help to solve the pass efficiency problem.

Over the course of 120+ previews, I end up typing this line about 73 times per offseason, but that doesn't make it untrue: Injuries hurt in the present tense but often help in the future tense. Cornett, Davis, and two returning starters on the line (Brett Boyko and Robert Waterman) all missed the spring with injury, but in a desperate search for more difference makers, missing four of your most known quantities might not have had that much of a downside. In their absence, players like Adonis Smith got extended looks, and the line may have begun to uncover some clearly definable depth. The line was quite possibly the strength of last year's offense -- mediocre on the ground (though, as mentioned above, the line's stuff rate, its ability to avoid negative plays, was solid) and strong in pass protection (with help from a mostly quick passing game) -- and despite the loss of two 2+ year starters, it returns quite a bit of experience overall. 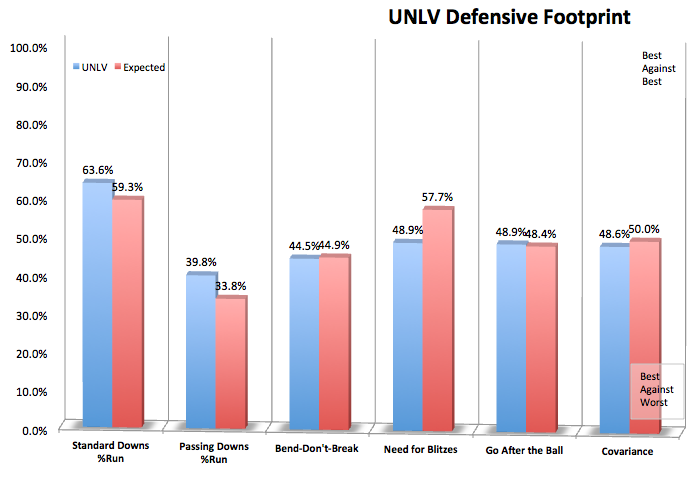 Seventy-fifth in the first quarter, 113th in the second. Fifty-second in the third quarter, 81st in the fourth. Sixty-fifth on first down, 117th on third. In 2012, UNLV showed reasonable potential in some areas of the defense -- big-play prevention on the ground and on standard downs, efficiency through the air. But from play to play and from quarter to quarter, it just couldn't maintain success. That pretty clearly suggests the need for a few more pieces, a few more interesting play-makers. Hauck has added four junior college transfers on the line and welcomes a few interesting freshmen and redshirt freshmen among the back seven, but will it be enough? UNLV's overall recruiting rankings tell us that there's not a lot of margin for error here -- most of the more highly-touted guys on the roster need to be hits, not misses.

UNLV's seven returning linemen from last season average 6'4, 267. Its four incoming junior college transfers average 6'3, 261. There are certainly smaller lines out there, especially at the defensive end position, but when you look at the Rebels' rankings from last year, you quickly spot how bad they were up front against the run: 113th in Adj. Line Yards, 114th in standard downs line yards per carry. UNLV needs to be able to stand up to run blocking better than it did last year, and it won't be able to rely on sheer mass to make that happen. Well, they won't be able to unless redshirt freshman Charles Howard is ready for playing time. At 6'4, 335, he is massive by any definition.

There is a hint of play-making ability up front -- Mark Garrick's nine tackles for loss were nice, especially for a defensive tackle, end Parker Holloway is active, and Sonny Sanitoa is a potentially strong pass rush specialist. The line got its hands up against the pass pretty well, too. But sacks and passes broken up only matter if opponents have to pass. The Rebels were pushed around too much against the run last year. Improve up front, and UNLV might be able to account for a disturbing lack of play-making from the linebacker position and better utilize what appears to be a secondary with decent ball skills (corners Sidney Hodge, Tajh Hasson, and Kenneth Penny combined for 19 passes defensed, though they were able to turn only two into interceptions).

This is neither here nor there, but since we talked about high school alma maters for UNLV's skill position stars above, it might also be fun to point out that redshirt freshman David Green hails from Wasilla, Alaska. First, this marks the ninth straight season that UNLV's roster features at least one player from Alaska. Second ... well ... insert predictable "He can see Russia from his house" joke here.

UNLV's special teams unit was good at one thing in 2012: making field goals. Nolan Kohorst wasn't asked to do a lot -- UNLV attempted only 14 field goals, 101st in the country (it should be noted, by the way, that going for it on fourth down instead of attempting field goals can be a pretty good underdog strategy) -- but he did well in what he was asked. He made both of his longer attempts and missed just two of 12, good for top-10 FG efficiency. He returns, but while Marcus Sullivan might make for a pretty good return man, the Rebels need a couple more weapons here. Underdog programs throughout the country were able to derive a bit of an advantage in the special teams department. UNLV was not one of those programs.

There are five Mountain West teams projected 100th or lower in 2013; as is typically the custom with the MWC, the dead weight offsets some of the positives of the top teams, four of which are projected 60th or higher. Unfortunately for UNLV, a) the Rebels are one of those five teams (and therefore cannot play themselves), and b) they share a division with only one of these teams (Hawaii). They do also get a shot at New Mexico, but thanks to their residence in the MWC's West Division, along with a non-conference slate that begins with a couple of BCS opponents, the Rebels probably won't get much of an opportunity at six wins. Compare their schedule to the other MWC teams we've previewed thus far: New Mexico plays six teams projected 100th or worse, while Colorado State plays five and an FCS opponent.

That said, the growth should continue. This is an experienced roster, perhaps not deep enough but deeper than it has been. With a Wyoming-esque amount of close-game luck, perhaps a bowl could be in the cards, but if they can just work back to .500 in such games and improve overall, then progression to 4-5 wins shouldn't be a stretch. That's far from inspirational, but again, improvement is improvement, and UNLV is finally showing a bit of it.