2013 Wyoming football's 10 things to know: Consistency is not always a good thing

Wyoming's win total changes drastically each year, even though its overall quality barely changes at all. Entering his fifth year in Laramie, head coach Dave Christensen wields a strong passing game and almost no other proven quantities. After a forgettable four-win season that included an unforgettable post-game rant, does he need to get back to a bowl to save his job?

Share All sharing options for: 2013 Wyoming football's 10 things to know: Consistency is not always a good thing

Consistency isn't always a good thing. Over the course of four seasons with Wyoming, head coach Dave Christensen has taken a team that ranked 110th in the F/+ rankings when he inherited it and has produced squads that ranked 101st, 108th, 104th, and 100th, respectively. Because of some strange variance in close wins (a ton one year, very few the next), the Cowboys' win total has changed drastically in his time in Laramie; it has either gone up or down by at least three games in every season. But relatively speaking, the quality has not changed at all. With each progressive year, the offense gets a little better and the defense gets a little worse, but it has been a nearly zero-sum relationship overall.

A team that ranks in the 100s isn't very good. Christensen's two bowl runs probably helped to earn him a fifth year in charge, but if he wants a sixth year, that win total will need to go up again. He seems to have a thing for odd-numbered years, even going back to his years with Gary Pinkel at Toledo and Missouri. But "Hey, it's an odd year! We're cool!" probably isn't going to get you very far. Measurable improvement is needed. And while Wyoming returns a ton of experience from last year's squad, so do the other teams in the bottom half of the MWC. Not all of them can improve their win totals at the same time.

2. No continuity, no momentum

If you were to rank Wyoming's offensive performances in 2012, using Adj. Points, you would find the Cowboys' second-best performance (Toledo) preceding their worst (Cal Poly). Their second- and third-worst sandwiched their fourth-best. It was an up-and-down season, and it didn't stop on offense. Wyoming played at a reasonably average level against Nevada, Air Force, and Fresno State but gave up a terrible number of yards and points to Idaho and Colorado State. This is typically of a team that is either really young or really banged up, and to be sure, Wyoming was plenty of both. The Cowboys leaned on a sophomore quarterback (who missed two games) and two freshman running backs and had to shuffle like crazy in the defensive front seven. Their most explosive receiver played only eight games. A starting linebacker played just two games, and their biggest contributions at defensive end came from freshmen.

This team really didn't have a chance, in other words.

Christensen is applying a lot of the principles of Don James' "Process," one in which he became very well-versed while coaching under former James disciple Gary Pinkel. He helped Pinkel to unearth talent and strong athleticism in weird places, and he has attempted to do the same thing in Laramie -- he has players from Germany and Sweden on the roster and has recruited high schoolers from across the country, from Wisconsin to Washington, from Illinois to California. But he has not yet built the depth necessary to field a winning program in a decent conference.

He'll have depth and experience in 2013; can he take advantage? 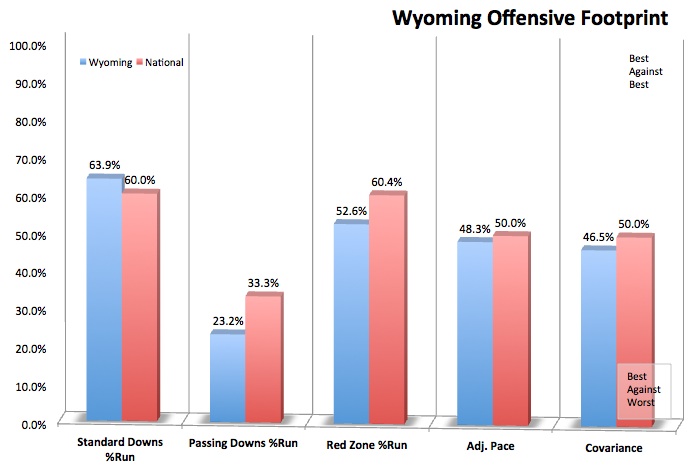 Wyoming's offense, run by two old-school spread offense guys (if there is such a thing) Christensen and Gregg Brandon, was a pretty unfriendly system for quarterbacks in 2012. Wyoming was run-first on standard downs but passed quite a bit more than the national average on passing downs, which meant that a disproportionate number of Brett Smith's pass attempts came on defense-friendly passing downs. This became even more disproportionate when you realize just how awful Wyoming was on standard downs. That he still completed 62 percent of his passes, with a pretty brilliant 27-to-6 TD-to-INT ratio, was quite impressive. Smith also rushed almost 10 times per game with reasonably decent results.

Smith was the Wyoming offense in 2012, in other words. He has been Wyoming's best asset since his first game as a freshman, and assuming he can stay healthy, one would assume that won't change too terribly much in 2013 despite a shift in coaching responsibilities. Brandon is now the offensive coordinator at New Mexico State, and assistants Pete Kaligis and Jim Harding have been promoted to co-coordinators; Christensen will call the plays.

4. The anti-New Mexico ... or maybe the anti-Colorado State

Wyoming, meanwhile was the exact opposite; the Cowboys had a decent passing game with Smith tossing to Chris McNeill, Dominic Rufran, Robert Herron, and Jalen Claiborne. And Smith was, at times, a passing downs magician, figuring out ways to move the chains after falling into second-and-9 or third-and-7. The problem for Wyoming, of course, was that the Cowboys were absolutely awful at running the football and couldn't stay out of passing downs. Even if you're pretty good at third-and-7, third-and-7 will eventually defeat you. The task for Christensen and his new co-coordinators is simple: figure out how to get five or six yards on first down, one way or another.

5. You might just want to lean on the pass

The natural conclusion when you see that Wyoming stunk at the run and couldn't get yards on first downs is that the 'Pokes really need to run the ball better. And that's true. With health and better experience in the backfield, it's certainly conceivable that Wyoming will be able to rely on a better run game. But there are a lot of ways to move the ball on first down, and Christensen's later Missouri offenses quite frequently used short passing on standard downs to open up the field and move the chains. With a receiving corps that is deeper than most in the Mountain West, Wyoming could potentially see success by doubling down on the pass.

Leading receiver Chris McNeill is gone, but he was also the least proficient of any of Wyoming's regular targets last year. Robert Herron struggled with injuries early on, but after catching five passes for 173 yards and two scores in the season opener versus Texas, he also finished the season with 16 catches for 376 yards and three scores in the season's final three games. If healthy, he is a potential star heading into his senior season. Throw in Jalen Claiborne (eight catches for 195 yards and two TDs versus CSU, UNM, and UNLV), some decent efficiency options, and some interesting newcomers, and you've got a unit that could do some lovely things when not tasked with a host of third-and-longs. 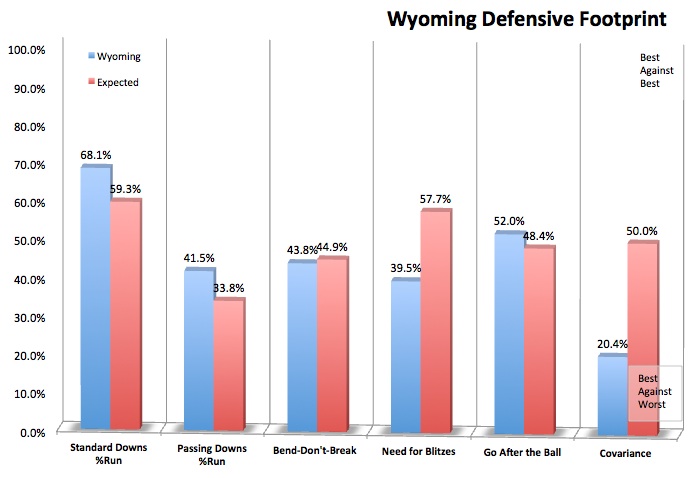 6. Like Wyoming, Wyoming's opponents probably should have passed more

Wyoming played run-heavy teams like Air Force, New Mexico, and even Texas; plus, the Cowboys trailed quite a bit in 2012. So it should be no surprise that Cowboy opponents spent a lot of time running on Wyoming. That said, opponents spent a lot of the time running the ball. Clearly it worked for the most part (opponents did, after all, go 8-4 against Wyoming last year), but whatever strengths Wyoming may have had on defense, running the ball played to them. Big plays were an issue, but the Cowboys were semi-efficient on the ground against a host of solid run offenses.

Now they just have to hope that their reasons for efficiency are still in uniform. The best play-makers in the front seven were probably tackle Mike Purcell and linebacker Ghaali Muhammad, both of whom have run out of eligibility. End Eddie Yarbrough remains, and a strangely high percentage of end Sonny Puletasi's tackles were behind the line of scrimmage, but a good chunk of Wyoming's play-making against the run is gone.

If the run defense regresses, can the pass defense make up the difference? Possibly. The terrible pass rush probably won't get any worse, and if Wyoming chooses (or is forced) to get a little bit more aggressive in its pass defense, there are some experienced defensive backs who made a reasonable number of plays on the ball despite generally soft coverage.

The most likely scenario is that Wyoming's defense improves a bit on passing downs and regresses an equal amount on standard downs. But there are certainly some interesting youngsters who could turn that sentiment around a bit. The most recent version of Wyoming's depth chart (PDF) saw two redshirt freshmen (Uso Olive and Chase Appleby) battling it out for the starting nose tackle job, along with a redshirt freshman (Lucas Wacha) starting at weakside linebacker. Puletasi is lined up in the BUCK position (the hybrid DE/OLB), and other youngsters like linebacker Jeff Lark and end Siaosi Hala'api'api could play key roles. The secondary is experienced and semi interesting, but Wyoming will be relying on some ultra-young players to hold the fort up front. That isn't a strategy that typically works incredibly well, but you never know, right?

Scroll down to his name on Wyoming's roster, and I'm confident that you will be looking at the only Kicker/Strong Safety in the country. Uniqueness is fun. That he was also one of the better members of Wyoming's special teams unit (along with punt returner Blair Burns) is a bonus.

I mean, we can't not mention this, right? We're still only a few months removed.

It's rare to get four years into a coach's tenure and have no idea what the ceiling is, or even whether the tenure has been good, mediocre, or bad. Two bowls in four years is certainly nothing to scoff at; hell, Joe Tiller only took Wyoming to one in six years before leaving for Purdue (okay, so his final team went bowlless at 10-2; the point remains), and only one other coach has taken Wyoming to multiple bowls since Lloyd Eaton's stunning run in the 1960s (Wyoming went 20-2 in 1966-67 and finished sixth in the AP poll in 1967). But he's done so without actually building a team of any sort of consistent quality.

In 2013, Wyoming will have a lovely passing game on which it can lean heavily if it so chooses. But its running game and defense still could leave much to be desired. With six opponents projected 100th or worse (and another two projected no better than 72nd), bowl eligibility could be in the cards with another string of quality play in close games. Is that the bar for Christensen at this point? Can he survive another bowl-free year, especially if it is once again accompanied by a level of play that is probably not in the Top 100?