DO NOT REST. THE COLLEGE FOOTBALL PLAYOFF'S LOGO EYE OF SAURON IS WATCHING. IT IS ALWAYS WATCHING.

We have a winner in the College Football Playoff's pick-one-of-our-nondescript-logos contest!

Yes, that's right, you the people - and/or some dude in Texas with a sweet algorithm - got together on the internets to decide the logo for the new College Football Playoff, because, you see, this time, its about doing what the people want! This is the one you picked.

Yes, 38 percent of you voted for this logo. The @CFBPlayoff Twitter described this one as GOLD BALL, but I prefer to call it YELLOW LINES SURROUNDING PAIR OF EQUALS SIGNS. You might also remember it from its role in the Lord of the Rings film trilogy: 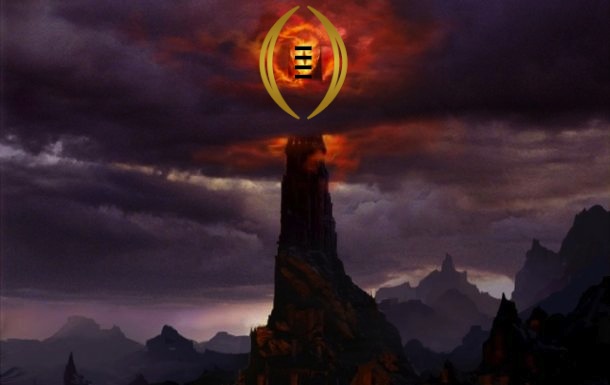 When the College Football Playoff listed a description for each potential logo, they left in a little detail about how this design is apparently reminiscient of the still as-of-yet-unreleased championship trophy design:

Representing the ascent of teams to the playoffs, two gold brackets surround a 'virtual' football, and allude to the championship trophy.

The jury is still out on how this a) represents the ascent of teams to the playoffs or b) how the football is virtual. Is it just virtual in that the logo is a representation of a football, and is not an actual football? Because that's definitely true. The tidbit about the championship trophy could be referring to our already extant crystal football, but Bill Hancock implied in a press conference that there was a forthcoming new trophy for the playoff system.