Tulane improved a little bit in Curtis Johnson's first year as head coach. The Green Wave should improve a little bit more in 2013. The goals are modest, but the schedule is pretty easy. Can Tulane top four wins for the first time in eight years?

1. Be better than you were before

And if the goal was simply to be better in 2012 than they were in 2011, then the Green Wave succeeded in Curtis Johnson's first year in charge. You had to squint to find the improvement (Tulane moved from 113th in Off. F/+ to 112th, stayed at 102nd in Def. F/+, and improved from 110th to 48th in Special Teams F/+), but it was there if you looked for it, especially when quarterback Ryan Griffin was healthy. (When he wasn't? Hoo boy, did things fall apart.)

Plus, Johnson brought in a few pretty highly-touted pieces in his first two recruiting classes, and Tulane got an invitation to move from Conference USA to Whatever We'll Be Calling The Big East Soon. Granted, Johnson needs a lot more pieces. And granted, the invitation of Tulane to the Big East is apparently the step that made the Catholic 7 officially decide to break apart from its football-playing members. But still, if you're a Tulane fan, you have slightly more reason to see hope in the future than you did this time last year. And for now, that simply has to be considered enough.

It is difficult to know what will happen when a starting quarterback gets hurt. Some schools are equipped with multiple quarterbacks of pretty similar talent and can replace a starter reasonably effectively. Some have backups with decent, divergent skill sets that force an opponent to account for a different style of ball, which offers a temporary scouting advantage for the team with the injured QB. And some teams ... just don't have a backup quarterback.

When Ryan Griffin was healthy last season, Tulane's offense was downright decent. Not amazing, but not bad. Griffin completed 62 percent of his passes, threw 20 touchdown passes and posted some gaudy totals against bad defenses -- 466 yards and five touchdowns versus UAB, 476 and four versus Rice, 363 and two versus UTEP. But at near the beginning of the season, as Tulane was still growing accustomed to its new offense, Griffin went down with a shoulder injury in the second quarter of the Tulsa game and missed most of four games. When he was out, Tulane's offense was one of the worst that the FBS level has ever seen.

True freshman Devin Powell finished the Tulsa game, going a reasonably decent 8-for-16 for 110 yards and a touchdown. He started against Ole Miss but injured his toe and completed just 22 of 41 passes for 145 yards and three picks. Next up: D.J. Ponder, known more for his prowess as a closer (2.53 ERA, 13 saves for the Tulane baseball team). He completed 35 of 83 passes (a dreadful 42 percent completion rate) for 333 yards and five picks in blowout losses to UL-Monroe and UL-Lafayette. These two former directional schools with a lower conference standing than Tulane outscored the Green Wave, 104-23.

And then Griffin came back, started completing passes to the right team, and Tulane knocked off SMU and UAB and barely lost to UTEP, Rice and East Carolina.

The good news: There were signs that this offense could be interesting if captained by a decent quarterback.

The bad news: Griffin was a senior. He will be plying his trade, probably, as a backup in the NFL next year. 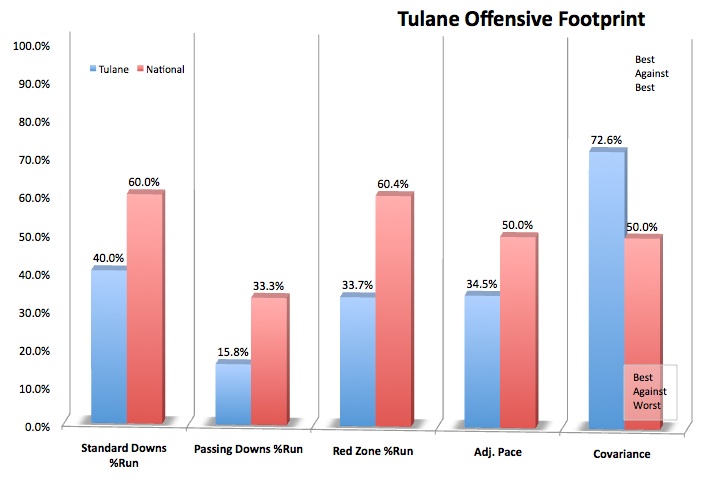 Both Griffin (bad) and Ponder (good) are gone, and this spring saw a pretty impressive battle between Powell, who received a medical redshirt after barely playing last year, and a name you probably recognize: Nick Montana. Montana was last seen backing up Keith Price at Washington; he completed 20 of 36 passes for 152 yards, three touchdowns and a pick while subbing in for an injured Price in 2011, then transferred at the end of the season. He and Powell finished the spring as Co-No. 1s on the post-spring depth chart (PDF). Regardless of who wins the job, one has to assume there will be general competence. Montana showed it in Seattle, and Powell looked perfectly decent against Tulsa before his trainwreck against Ole Miss. It's a shame that we only got to see Griffin run Johnson's offense for one year, but the drop-off at the quarterback position shouldn't be as dramatic as last year's numbers might make one assume.

4. Ryan Grant is a keeper

Curtis Johnson was the receivers coach for the New Orleans Saints for six seasons and was a college receivers coach at Idaho, San Diego State, SMU, California and Miami before that. Offensive coordinator Eric Price was his father Mike's coordinator at UTEP for four years and has "receivers coach" on his resume as well. So it kind of goes without saying that they want to throw the ball as much as humanly possible.

That's good in a couple of different ways: First, it allows them to somewhat ignore the fact that the run personnel is pretty awful. Tulane's offensive line couldn't open running lanes to save its life, and Green Wave running backs weren't very good at taking advantage of the holes that did exist. But in a reasonably pro-style, quick-passing attack, Tulane was able to take advantage of half-decent pass protection, Griffin's arm, and Ryan Grant's receiving ability.

Grant was not the most efficient weapon in the world, but he was one of the nation's better deep threats, averaging enough yards per catch (15.1) to offset a sub-60 percent catch rate. Toss in intriguing junior Xavier Rush (the high-efficiency, low-explosiveness complement to Grant), some nice catching capabilities from the running backs, and the simple fact that nearly everybody returns from last year's receiving corps, and you've got a pretty solid unit here. It would help to get something, anything, from the run game, but ... baby steps. If there is competence at the quarterback position, Tulane should once again pass for a pretty high volume.

Tulane had the worst line in the country when it comes to creating opportunities for its backs (Opportunity Rate) and one of the worst when it came to blocking on run-friendly downs (Standard Downs Line Yards Per Carry) and avoiding tackles for loss on the ground (Stuff Rate). With a bit more competence, perhaps Johnson and Price would be willing to call for a few more handoffs. And if experience cures incompetence to some degree, one could expect improvement here in 2013. Three-year starting tackle Eric Jones is gone, but everybody else returns on a line that introduces two reasonably highly-touted redshirt freshmen and two very highly-touted true freshmen. WIth only two projected senior starters (Morgan and Mares) and youth on the left side (Jacquet and Shienle could end up starting), this could turn into a downright solid line by 2014. So there's that. 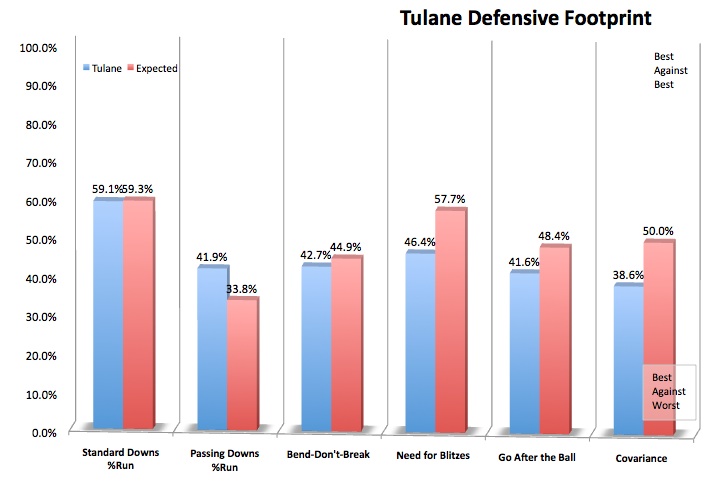 6. All-or-nothing on the line

Tulane's defensive line was pretty decent at generating pass pressure on standard downs and getting into the backfield against the run. It also got sliced up a ton by opponents' run blocking and gave quarterbacks too much time on passing downs. There were some notable strengths here, but not nearly enough of them. Still, this was probably the most impressive (relatively speaking) piece of an incredibly unimpressive Tulane defense. And despite the loss of end Austen Jacks, it could potentially expect improvement in 2013 thanks to maturity and, in part, one specific addition.

Chris Davenport was a five-star signee for LSU in the 2009 recruiting class, the No. 25 overall senior in the country. He is ridiculously big and athletic; he also never really found a spot in the trenches for LSU, on either side of the ball. One shouldn't expect Davenport to suddenly become the blue-chipper he was supposed to be, but it is certainly reasonable to expect him to hold his own on the depth chart (he was listed as a co-starter at nose tackle, with Corey Redwine, at the end of spring, which isn't bad considering he didn't transfer to Tulane until January) and improve Tulane's overall level of play at tackle. If he can simply occupy blockers and free up linebackers to make tackles. Tulane's Opportunity Rate should improve quite a bit. That shouldn't be too much to ask.

8. The secondary should come around eventually

Three of Tulane's more impressive recent recruits got a lot more playing time than they were probably ready for in 2012; four-star signee Darion Monroe was asked to almost immediately captain the secondary, while three-star corners Lorenzo Doss and Jordan Batiste were thrown into the deep end as well. Doss and Batiste had their moments -- they combined for six interceptions and 10 passes broken up -- but a cursory glance at Tulane's pass defense rankings suggests there is a long way to go here, especially considering Tulane ranked 114th in Passing S&P+ despite a decent pass rush. There are no five-star transfers ready to plump up this unit's capabilities, and the secondary does have to deal with the loss of three of its top seven players, four of eight if you count Kyle Davis, who is now at linebacker. But last year's struggles could pay off at some point if Monroe, Doss and Batiste indeed have the potential the recruiting services said they do.

(By the way, Devon Walker is doing pretty well, all things considered.)

One thing Tulane didn't have to worry about in 2012: place-kicking. If the Green Wave offense was able to maneuver its way inside the opponent's 30, it was probably getting points out of the trip thanks to Cairo Santos. Santos has had an odd career to date; he made 13 of 16 field goals as a freshman, made just 11 of 18 as a sophomore, and didn't miss a single field goal last year. He knocked in an absurd 12 of 12 kicks from more than 40 yards, even bombing in a 57-yarder at some point. Kickers are weird -- for all we know, Santos has some allergy to odd-numbered years -- but between Santos (who is also a hell of a kickoffs guy, to no one's surprise), punter Peter Picerelli, and a decent punt return man in Derrick Strozier, special teams should be a Tulane strength for the second straight year.

Tulane returns a load of experience, welcomes some three- (and five-) star guys to the fold, and might end up with a competent quarterback despite Ryan Griffin's departure. How much improvement do you figure that's worth? Because if the Green Wave can just improve to the No. 95-100 range in the F/+ rankings, they could pull off a bowl bid.

No, seriously. Look at the schedule. Tulane plays five teams projected at 108th or worse in 2013, plus Jackson State, plus four more teams projected no better than 81st. Granted, of the nine weaker FBS teams on the schedule, Tulane only gets four at home, but this is a schedule custom-made for a decent win total. The goal probably shouldn't be six wins -- it's hard to justify that with this defense, if nothing else -- but this team has won just four games in two years and hasn't won more than four in a season since 2004. Again, it's all about doing better next year than you did last year. Tulane should be able to pull that off again in 2013.