UAB threatened Ohio State well into the fourth quarter in Columbus and got destroyed by Memphis at home. Garrick McGee's first season in charge was full of upside, youth, and serious head-scratchers.

Share All sharing options for: 2013 UAB football's 10 things to know: Watering seeds and finding a blitz

The results never really came around, but Neil Callaway was close to a breakthrough. The UAB coach, hired in 2007 to replace Watson Brown, boosted his Blazers from 115th in the F/+ rankings to 98th in 2008, then 93rd in 2009, then 82nd in 2010. But thanks in part to a 3-9 record in one-possession games, UAB couldn't ever get over the hump in the win column. The Blazers went 1-5 in close games in 2010 and finished 4-8 overall; a .500 record in such games would have potentially resulted in a bowl bid.

Things fell apart in 2011 -- UAB sank to 108th and 3-9, and Callaway was gone -- and Garrick McGee, former Bobby Petrino assistant at Arkansas, took over. He's been talking about planting seeds lately, and one can understand the metaphor. His first season in Birmingham had its fair share of encouraging moments, same-old-UAB moments, and youth upon youth. The Blazers did improve to 91st in F/+, and the turnover is minimal this time around (sans a huge loss at linebacker); there's no reason to think there won't be more improvement coming down the pike. But this program seems to hit a ceiling around five wins and an F/+ in the high-80s. Is Williams the man to take UAB beyond that?

As might be expected when a first-year coach leads a super-young team onto the field, UAB's season featured a wealth of highlights and lowlights. The Blazers hung around for quite a long time against an Ohio State team that finished 12-0 (it was 21-15 midway through the fourth quarter), conquered Southern Miss and Marshall and came up just short against two Conference USA bowl teams, Tulsa and East Carolina. Oh yeah, and they also lost by 37 points to Memphis at home. Ove the course of 12 games, UAB was awful, above average, awful, and mediocre.

Make sense of that, I dare you. Jonathan Perry, then a junior, played most of the first two games and the last one, and despite the fact that his replacement, then-freshman Austin Brown, was more sporadic (in good ways and bad), UAB's overall offensive performance improved a decent amount; for most of the final 10 games, UAB was average or better on offense (aside from the egregious performance against Memphis, in which the Blazers gained all of 213 yards against the No. 80 defense according to Def. F/+). And the young defense was all over the map. 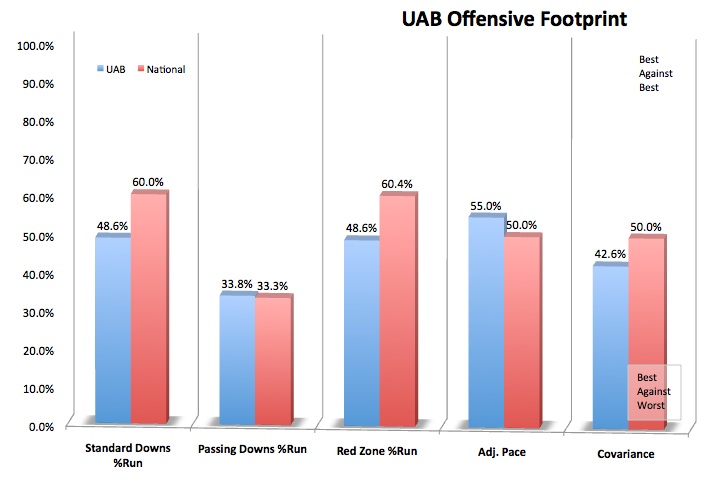 3. The training wheels are off

UAB's offense utilized lots of passing on standard downs and lots of running on passing downs. There are three reasons why you might do this: Either you are an extreme underdog trying to throw your opponent off, you have a quarterback who isn't much of a passer (or is Taylor Martinez, not much of a passer but with serious legs), or you have a freshman quarterback. UAB utilized Austin Brown in a way similar to what UCF did with Jeff Godfrey back when Godfrey was a true freshman (2010); like UAB as a whole, Brown hinted at both upside (13 yards per completion, 15 touchdown passes) and youth (12 interceptions, a terrible sack rate). He completed 20 of 30 passes for 337 yards, three touchdowns and a pick (with a lot of sacks) against Tulsa and completed 22 of 37 for 319 and three scores against ECU, and in what may be an encouraging sign, he threw six of his 12 picks in just two games. When it wrong, it went wrong a lot, but it didn't always go wrong. If that makes any sense.

Garrick McGee and offensive coordinator Richard Owens might be taking the training wheels off this year; their approach to play-calling was both smart and conservative, and they might give Brown a chance to make a few more plays this year. And the best part is that, if Brown struggles with the extra responsibility (or gets hurt), the Blazers have a pretty good backup plan in Jonathan Perry. They also might have a strong run game to fall back on if they need to.

4. Depth in the backfield

Darrin Reaves was a first-team all-conference running back in 2012, and on a carry-for-carry basis, he was the least effective of UAB's top three backs. Former star recruit Greg Franklin and intriguing freshman Bashr Coles were each excellent in backup roles (especially Coles, who showed some big-play ability among his three carries per game). While the play-calling may have been conservative, it was also pretty effective with the efficient Reaves grinding out yards and ceding the floor to his big-play backups from time to time. While passing on standard downs had its purpose last year, three good backs running behind a more experienced line might be an equally effective option this time around, especially with the loss of three of UAB's top five receivers. Jackie Williams is a quality No. 1, but we'll see who else might emerge in the receiving corps to replace Patrick Hearn and Nick Adams, both of whom averaged better than 8.5 yards per target. Jamarcus Nelson is an interesting, if terribly inefficient, option, and former star recruit Nyiakki Height enters the picture after a year at safety. Plus, JUCO transfer DeVante Scott was perhaps the jewel of the recruiting class. There are options, but no guarantees.

5. A solid line, all things considered

Offensive line coach John Peterson earned his salary last year. UAB returned a single lineman with any starting experience (Chris Hubbard) and was forced to shuffle the lineup around all year, but the Blazers still ranked in the Top 100 in both Adj. Line Yards and Adj. Sack Rate (Brown's awful sack rate was mitigated by Perry's ability to avoid them); those aren't great ratings by any means, but it could have been much worse. UAB held up reasonably well against blitzes and opened holes for runners on run-heavy downs. And this time around, Peterson's line still might have overall depth problems, but it does return six of eight players who started a game last year. Losing Hubbard, easily their best lineman, is a blow, but the line has a lot more going for it overall this time around. 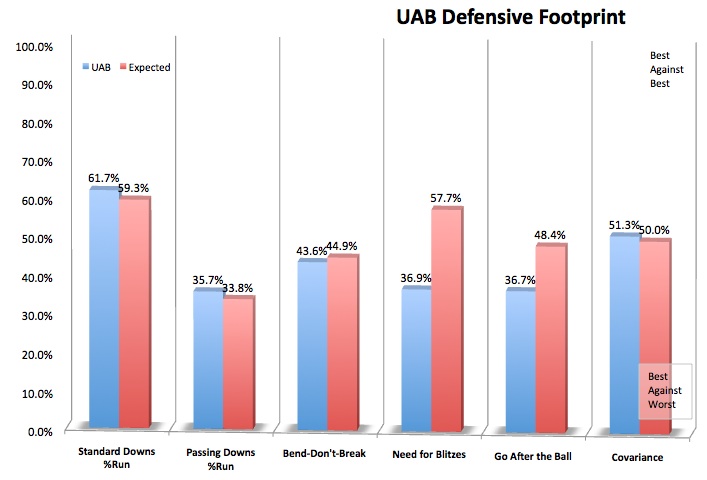 UAB's defense was in no way good in 2012. We'll get that out of the way immediately. But it did have some strengths -- the Blazers were decent at generating pass pressure, mostly from its front four, on standard downs, made a good number of plays in the backfield, and was reasonably efficient (or, at least, not incredibly inefficient) against the run overall. But they were terrible against the pass, in part because they got no pressure whatsoever on the quarterback on passing downs. When you are almost twice as likely to record a sack on first-and-10 instead of third-and-10, something is amiss.

The line returns everybody of consequence, which is lovely. Ends Diaheem Watkins and Chris Walton were solid; Watkins was downright good until he was sidelined with a rib injury for five games. And the tackles are both decent and of good stature. There is perhaps more potential up front than at any other place on this defense. But there is no guarantee that the Blazers will be any better at linebacker, especially considering their star is gone.

Marvin Burdette almost made one of every five UAB tackles last year, which is absolutely absurd. He was one of the primary reasons for the run defense's semi-efficiency, too, logging 13 tackles for loss among his 123.5 tackles. Patrick Bastien has potential, and if Daniel White (a senior who has battled all sorts of injury issues in his career) can stay healthy, he could make up for some of the lost play-making ability. But the linebackers only managed six sacks last year, and in Burdette and Greg Irvin, they must replace half of that total. There are quite a few interesting recruits coming into the picture, but relying on freshmen is rarely good for immediate improvement.

8. Boosting the back seven

Of the 23 members of UAB's first full recruiting class under McGee, 11 were either defensive backs or linebackers. Plus, receiver Jay Davis makes a switch from receiver to safety. That tells you that, while the blitz was pretty bad, the secondary itself had plenty of say in UAB's awful No. 118 ranking in Passing S&P+. There was some play-making ability here -- returning safeties Calvin Jones and Jake Ganus and corner Lamarcus Farmer combined for 10 tackles for loss and 13 passes defensed -- but down-for-down proficiency was sorely lacking. Experience is better this year, especially with two former three-star recruits (Ganus and Kelton Brackett) getting thrown into the fire as freshmen, but it will probably be another year before this secondary rounds into respectable shape.

9. You have to tackle the punt returner

UAB's special teams unit was pretty solid overall. Ty Long was a solid kicker and kickoffs guy, Jackie Williams was a good punt returner, and the kick coverage unit was decent. Plus, punter Hunter Mullins averaged nearly 45 yards per punt with lots of fair catches and balls downed inside the 20. But it appears that Mullins was also quite adept at outkicking his coverage; when an opposing punt returner got a return opportunity, he tended to take it a long way. UAB was last in the country in opponent punt returns. Remedy that problem to some degree, and you've got yourself a potential Top 25 special teams unit.

UAB ranked 91st in F/+ last year and returns a wealth of experience. That suggests the Blazers could move into the 80s this year; to move any higher would require defensive improvement I don't see as realistic. So what does that mean for UAB's record? Your guess is as good as mine. The Blazers play seven teams projected between 79th and 102nd, three projected worse and two projected better. Beat the three worst teams and go 3-4 against the middling teams, and you're bowl eligible. Is that realistic? Is Austin Brown ready to take a step forward? Will the receiving corps produce a decent No. 2 option? And can the UAB defense improve at all on passing downs? This team has a lot of flaws, but ... teams ranked in the 80s and 90s typically do. If the Blazers can win some close games, they could very well reach a bowl this year, but we'll set the bar at 4-5 wins for one more year first.