The UTEP job is a difficult one, but UTEP alum and respected offensive line coach Sean Kugler succeeds Mike Price and attempts to make something out of a Texas A&M transfer quarterback, some weapons and a green defense.

1. Sean Kugler is a UTEP guy ... and that's about all we really know

It is never a good idea to spend too much time trying to figure out how a new coach will do when he is first hired. Coaching changes are such an epic crapshoot, and if you're being hired as a head coach, you probably have a pretty good resume. Still, it's easy to lean on certain assumptions depending on what type of hire is made. A former head coach at another school has a track record from which you can glean certain tendencies. A hot shot assistant can be viewed through the lens of his previous bosses.

It isn't hard to find a fellow coach who will gush about working with Kugler -- Boise State's Chris Petersen when Kugler left Boise in 2006: "There's absolutely no question that he's the best football coach I've ever been around" -- but aside from serving as Petersen's assistant head coach, he's never held a title loftier than offensive line coach. And he's only worked for one season at the college level since the turn of the 21st century. That he is a UTEP guy is good, as is the fact that he clearly isn't destructively ambitious, the type to leave for a better job after one season. If he is solid in his new role, he could stay in El Paso for solid amount of time. We just have no idea of knowing in advance whether he will be solid in his new role.

Since 2006, UTEP ranked 83rd, 81st, 82nd, 98th, 96th, and 93rd in the F/+ rankings. Consistency can be a good thing, but it probably wasn't Mike Price, who retired following 2012. Price won eight games in each of his first two seasons in El Paso (2004, 2005), and he certainly established a higher baseline than what existed through most of the 15 years between Stull's departure for Missouri and Price's arrival. UTEP had won three or fewer games in a season 10 times in 15 years and had only won more than four twice; the Miners were 6-30 from 2001-03.

The program was a disaster, and while Price couldn't maintain success (UTEP lost either seven or eight games in each of his last six seasons -- this is a hard job, in other words), he did manage to raise the bar at least a bit. But it was time for him to go. UTEP rode an absurdly easy schedule (wins over UA-Pine Bluff, 2-10 New Mexico State, 1-11 Memphis, and 1-11 New Mexico, and no team with an above-.500 record) to a bowl bid in 2010, but the writing had been on the wall for a while. He does not leave an empty cupboard for Kugler, however, especially considering the transfer Kugler recently added. 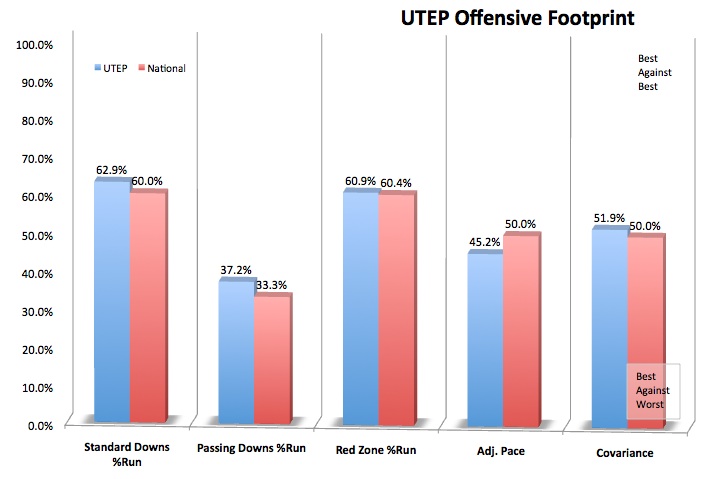 New offensive coordinator Patrick Higgins, like Kugler, has lived a pretty specialized existence of late. After serving as UTEP's offensive coordinator from 2000-03 (not exactly the most incredible span of time for the Miners' offense), he has served as either a special teams coach or receivers/tight ends coach at Louisiana Tech, BYU, and Purdue for the last nine seasons.

He did, however, serve as interim offensive coordinator, then interim head coach, as Danny Hope's regime fell apart at Purdue last year. Is there anything we can glean from that? Not really. Purdue passed slightly more than average on standard downs but basically attempted a balanced attack. The Boilermakers had no semblance of offensive efficiency, but that was probably a personnel issue, not a scheme issue. He inherits what could be a pretty interesting set of skill position players; balance is probably not the worst idea in the world.

Whatever Higgins wants to do with the ball, he'll quite possibly have a mobile quarterback running the show. UTEP is basically in the middle of a three-man playoff for the starting quarterback role, with the winner of this spring's Carson Meger vs. Blaire Sullivan match taking on Texas A&M transfer Jameill Showers upon Showers' arrival this summer.

However, he will get a battle. Meger, a senior, was more efficient than starter Nick Lamaison last fall, but Sullivan might be a little more intriguing overall. He was interesting on the ground (he ran more than he passed) and in longer passing (18.6 yards per completion, albeit with a dreadful 49 percent completion rate). A new coach has to like inheriting quarterbacks with different skill sets and similar skill levels; that's what Kugler and Higgins have here.

But yeah, Showers is probably going to win the job.

5. First impressions aren't worth much

In the first game of 2012, then-sophomore Nathan Jeffery ripped off 177 yards in 21 carries and scored on a blocked punt as UTEP threw a scare into Oklahoma.

After battling a groin injury, however, Jeffery struggled the rest of the year (in comparison), averaging just 4.4 yards per carry. He has looked solid this spring, and he'll be running behind a reasonably experienced, if thin, offensive line. There is good depth here, especially if the quarterback can add a running dimension to the mix, but Jeffery appears to be the man atop the depth chart.

Five UTEP players were targeted with at least 20 passes last year; none had a catch rate better than 55 percent. There was certainly some big-play capability here, especially from junior Jordan Leslie, whose per-target averages were lovely, but while you can thrive with an all-or-nothing guy atop the targets list, you need some efficient complements. 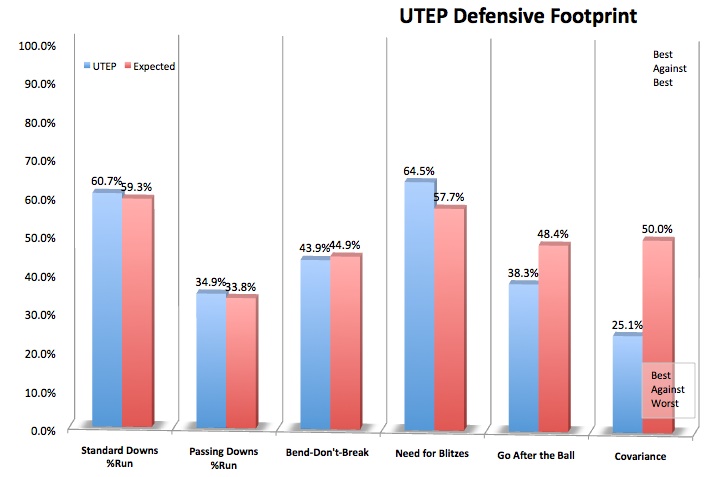 Kugler is not the only Boise State coaching alum on staff. He tapped Jeff Choate to run his defense and Andre Browning to run his defensive line; Choate spent six seasons under Petersen in various roles (RBs coach, LBs coach, nickel backs coach) before a year as Washington LBs coach. An intense guy, he inherits a unit that, to put it kindly, lacked much of Boise State's precision last year. The Miners were decent at closing drives after forcing passing downs, but with a sieve for a defensive line, they forced fewer passing downs than nearly any team in the country.

8. The D-line got pushed around

UTEP ranked 124th, dead last, in Standard Downs Line Yards per Carry, 122nd in Stuff Rate (the number of times you stuff a run in the backfield) and 114th in Opportunity Rate (the rate at which an opposing line creates opportunities for its runners). There was decent quickness throughout the line, and the Miners were decent at rushing the quarterback without blitzing; but if you can't even remotely stand up to the run, it doesn't really matter how you rush the passer. The tackle position could get a boost from newcomers (junior college transfer Peter Nonu enters the fray, as does Devonte Richardson, one of last year's more highly-touted recruits), but the margin for error here is small. Choate and Browning (a member of the Boise State line until 2006 and a defensive assistant for the last three years) have their work cut out for them here. Boise State's defensive line was always an area of strength, but it might take them a while to replicate that at UTEP.

9. The back seven is dreadfully inexperienced

Considering the awful run defense, UTEP's pass defense was a relative strength, but the Miners must replace all four starters in the secondary and two more at linebacker. Newcomers litter the secondary -- two junior college transfers, two three-star 2012 signees, and two incoming freshmen could all play a role in piecing together the 2013 two-deep -- though the biggest star could be senior Richard Spencer, who was piecing together a prolific 2012 season before a knee injury. At linebacker, meanwhile, backups like Gage Sharp and former star recruit DeAndre Little will get every opportunity to thrive.

Again, it's hard to know what to think of this staff or the talent it inherits. Almost every member of Kugler's staff (including Kugler himself) has ties to either successful teams or, in the case of linebackers coach Robert Rodriguez (a former Miner star), UTEP itself, and almost every member is now filling a role higher than one he has previously filled. In players like Jameill Showers, Nathan Jeffery, Jordan Leslie, and Richard Spencer, the Miners do have a little bit of high-end talent, and if they can figure out how to replace star punter Ian Campbell, they could have a good special teams unit again.

Breaking in a lot of new pieces (and coaches) is not conducive to a fast start, but for UTEP's sake, it better start fast, as its four lowest-projected opponents are also its first four. If UTEP is of reasonable quality out of the gates, it could easily start 4-0 or 5-0. The stretch run is loaded with softies, too, but it is also loaded with road trips.

If they can get to four wins early, they might be able to squeeze out two more later on and, like the 2010 team, reach a bowl team despite limited abilities. That might be too much to ask, but it is certainly something to shoot for in Kugler's first year.