Paul Petrino seems to play the underdog well. At least, he better, because there might not be a bigger underdog in FBS this fall than his first squad at Idaho.

Share All sharing options for: 2013 Idaho football's 10 things to know: More than underdogs

I wasn't blown away by Idaho's hire of Paul Petrino as head coach. He has made his name as an offensive coordinator, but his 2011 offense at Illinois fell from 51st in Off. F/+ to 117th, and his 2012 offense at Arkansas fell from 11th to 43rd. He showed every single bad tendency you can show in Arkansas' loss to UL-Monroe last year, and his sideline demeanor is a little too Pelini-esque for my tastes.

That said, when forced to get resourceful with a lack of resources, he has done so pretty well. While it fell off in his second year, the work he did in nearly coaxing out a Top 50 offense in 2010 with Illinois was staggering. He took a unit with a limited redshirt freshman quarterback (Nathan Scheelhaase) and no depth whatsoever (two players caught more than 17 passes) and crafted a competitive, unique offense. The Illini were competitive against good teams early in the season (they lost to Ohio State by 11, Missouri by 10) that year and showed seriously explosive potential, averaging 42.1 points per game over the last seven contests.

Two years before that, he had again nearly coaxed a Top 50 performance out of an Arkansas offense that not only had to learn a new system but also had to go through life without Darren McFadden and Felix Jones. With the Dick brothers at quarterback, Michael Smith at running back, and a lot of youth in the receiving corps, Arkansas struggled early (17.4 points per game in the first five games) but began to figure things out late (27.5 per game in the last four).

Petrino is a Montana boy, and he patched together an interesting staff in taking over for Robb Akey in Moscow. Arkansas receivers coach Kris Cinkovich, a Northwest native, agreed to be Petrino's offensive coordinator; Ronnie Lee, a Washington State grad and former Idaho defensive backs coach who spent two recent years (2009-10) as defensive co-coordinator at Minnesota (the Gophers improved to 67th in Def. F/+ in 2009, their best defensive rating of the Tim Brewster era), signed on to run the defense. The coaches know the area and understand the task ahead of them. Yesterday, I called the New Mexico State job the hardest in FBS. But while I stand by that, let's just say that Idaho can give any job a run for its money in that regard.

2. The exact same team, twice in a row

While Petrino was struggling to make everything come together in Fayetteville, Robb Akey was pulling off something impressive in Moscow. It wasn't the good kind of impressive, mind you, but it was a difficult accomplishment: He put together a team in 2012 that was almost exactly like the one he put together in 2011.

Considering what Idaho lost following 2011 -- the Vandals had to replace their starting quarterback, their top two rushers, two of their top three receivers, their three most experienced offensive linemen, two of four on the defensive line, four of six at linebacker, and two of four at defensive back -- that is actually an admirable feat. But it wasn't nearly admirable enough to save Akey's job. That Akey engineered a bowl season in 2009 and almost did so again in 2010 was damn impressive; but he had done what he was going to do at Idaho. It was a good time for a change.

3. If you squint, you can find November improvement

When you lose 11 games, and when you lose seven by at least 29 points, then it is pretty pointless to look for optimism or improvement. But for Idaho in 2012, it was there if you looked hard enough. The Vandals faced a brutal finish to the 2012 season, facing Utah State (17th in F/+), BYU (23rd), San Jose State (32nd), and Louisiana Tech (52nd) among their final five opponents. And accordingly, they were blown out four times. But adjusting for opponent, their level of play did at least improve in November.

Going from more than two touchdowns worse than the average team to just under one touchdown worse is indeed improvement, even if it's of the "Who cares? They still stunk" variety. 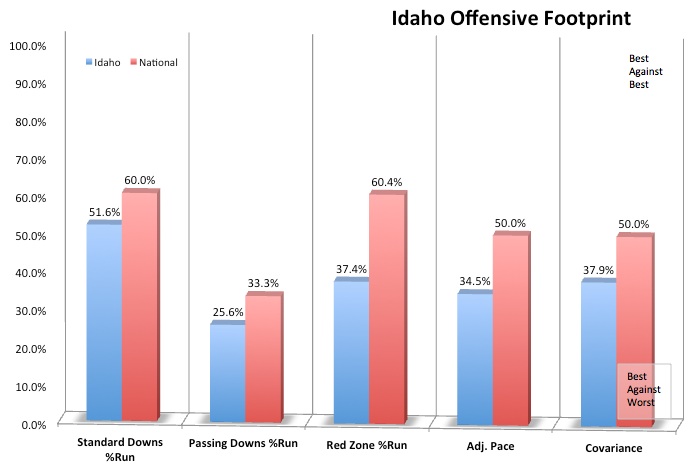 No. 1 quarterback Dominique Blackman was kicked off the team mid-season, and No. 2 quarterback Logan Bushnell has graduated. Leading rusher Ryan Bass is gone, as is No. 1 receiver Mike Scott. It probably isn't a bad thing for Idaho to have to start over, but the faces involved in the 2013 offense will not only be different on the sideline.

For what it's worth, it appears the leading candidate for No. 1 receiver is Jahrie Level, who had a lovely spring and finished it with nine catches for 169 yards in the spring game. On a per-target basis, he was the best wideout on the roster last last year at 7.6; but 7.6 isn't that impressive, and he'll probably need to bump into the 8s or 9s for Idaho to improve significantly. In all, three returnees posted at least average numbers last year; we'll see who else Petrino and Cinkovich can find for the rotation. And at running back, it appears two JUCO transfers -- Kris Olugbode and Jerrel Brown -- had the best spring sessions.

Meanwhile, local boy Chad Chalich outplayed Taylor Davis in the last couple of spring scrimmages, but we'll see if that's a good thing. My friend Paul Myerberg tried to turn the competition into a positive (which I admire)...

If Petrino and Cinkovich do opt for Chalich, having a player like Davis in reserve provides a bit of a safety net. That's perhaps the greatest positive from this alignment: Davis might not preferable as the Vandals' starter, but he's totally viable as the team's backup quarterback.

...but unless Chalich is a diamond in the rough, Davis' sack and interception troubles this year were probably in no way a good thing.

6. The line could be pretty strong (relatively speaking)

All told, the line was easily the strength of the offense last season. It was good in power situations and prevented negative plays on the ground, and while there were some blitz issues, it protected the passer well on standard downs. Five players return with starting experience (68 career starts), including two-year guy Mike Marboe at center. With a Petrino offense, we know that pass protection will be the primary concern, and it appeared that Idaho QBs got sacked a lot this spring (assuming tackling the QB was allowed, however, it's probable that these were one-hand-touch sacks), but we'll see. The line is the least of my concerns. 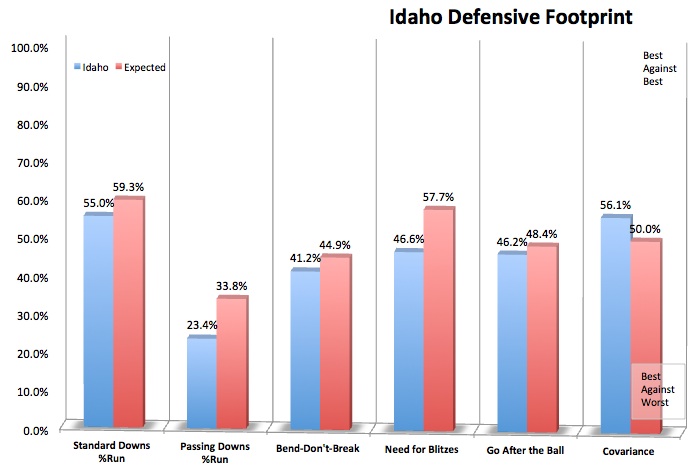 Really, you had plenty of options in facing the Idaho defense last fall. The D was quite a bit stronger than the O, but it wasn't particularly good at any one thing. Idaho's efficiency numbers were decent, which, when paired with poor big-play numbers, suggests a pretty aggressive approach. But the Vandals still ranked worse than 100th on the ground and in the air. Still, it probably says something that Idaho opponents had no problem passing, passing, and passing. Opponents threw four percent more than the national average on standard downs and 10 percent more on passing downs, and while there were some pass happy opponents on the schedule (Louisiana Tech), the slate was also full of LSUs, Utah States, UTSAs, and BYUs. Teams didn't have to even slightly fear Idaho's blitz, so they passed with reckless abandon on the rare second- or third-and-long, and the odds were good that they converted, too.

Ronnie Lee's background is a weird one -- after his Co-DC years at Minnesota, he ended up as Indiana State's running backs coach -- so I can't say I know what his general approach is going to be. But with almost an entirely new linebacking corps and secondary, it's probably going to take some trial-and-error to figure out what will work.

Only one current Idaho linebacker saw the field last year. Yikes. This unit was typically the strength of an Akey defense, but it will completely and totally hit the reset button in 2013. Hell, even Petrino's hire as linebackers coach -- former Vandals linebacker Mike Anderson -- left the program this spring to "pursue opportunities in the private sector." Double yikes. (It appears that former Indiana State linebackers coach Eric Brown will be taking over for Anderson. Hey, ISU was pretty good last year, so there's that.)

Lee won't have to trot four true freshmen out onto the field or anything -- Matthew Willis showed some level of competence last year, and four JUCOs join the rotation. But with so many unknowns, it's hard to get too excited about this former strength.

And this says nothing of the fact that UI must also replace its top two safeties and two of its top three corners. The secondary wasn't good enough in 2012 to fret too much about this, but any experience would be welcome int he back seven.

By ranking, the special teams unit was the strength of Idaho's team last year. The Vandals were strong in the punting game and had a strong kicker in Trey Farquhar, who made eight field goals of 40 yards or more. (Just imagine how many points Idaho would(n't) have scored without him.) But the Vandals also find a total reset in this unit; Farquhar and punter Bobby Cowan are both gone, as is just about every return man. (The return losses aren't as big a deal, as they mostly stunk last year.)

I'm generally a hopeful kind of guy. I was, after all, able to come up with quite a few encouraging things to mention about New Mexico State this week. But when it comes to Idaho, it's pretty difficult. The Vandals will have a strong offensive line and, potentially, a decent defensive line. They might have some interesting receivers for the system at hand. But they're starting over at quarterback, running back, linebacker, defensive back, and special teams. And the schedule isn't particularly forgiving: While Idaho does face six teams projected 97th or worse, they play four of those teams on he road. Home games versus Texas State and Old Dominion appear to be the most winnable available, but a) Texas State might actually be pretty damn good in 2013, and b) ODU has gone 21-5 at the FCS level over the last two years.

I'm not going to predict an 0-12 season, but I'll just say that Paul Petrino has his work cut out for him. The underdog role might look good on him, and he may end up a perfectly fine hire, but he probably has some work to do just to get Idaho up to underdog status.