Dying a good death in college football: 5 teams who lost with honor

A loss in the last game of the season does not have to be a sad experience. Here are teams who gained respect in ultimate defeat.

Share All sharing options for: Dying a good death in college football: 5 teams who lost with honor

"I knew a man once who said, 'Death smiles at us all. All a man can do is smile back.'"

"[Ida Blankenship] was born in 1898 in a barn. She died on the thirty-seventh floor of a skyscraper. She's an astronaut."

There's luck, there's dumb luck, and then there's my alma mater's basketball team making its first Final Four in two decades in my hometown. Add in the good fortune that I am friends with an Ohio State fan who had tickets to sell after the Bucks fell short of Atlanta while their arch-enemy made it, not to mention the fact that Michigan beat Syracuse on Saturday night to make the NCAA title game, and I had a very good weekend.

The Wolverines blowing a twelve-point lead and ultimately losing the national title game to Louisville did little to dampen my happiness with the experience of going to the Final Four or my feelings about this Michigan team. As I drove home through the empty streets of Atlanta, unable to turn on the radio or plug in my iPod because I was too deep in a mental zone, I was thinking about why I was so non-plussed by my favorite basketball team coming so close to a national title and falling short. Why was I more saddened by the fact that I would never see this team play again than I was by the fact that every time I look at the Georgia Dome from here on out, I'll think about what could have been instead of what was?

It was at this point that I started hatching the elements of a good death for a sports team. A good death should have some or all of the following elements:

So what are some college football teams that looked at the grim reaper's face and smiled back? Which teams bellowed "Freedom!" with their last breaths? And am I going to keep asking melodramatic questions? Did the combination of Michigan-Louisville and a two-hour episode of Mad Men about dealing with death make me impossibly sappy? Let's address the first two questions:

In 1987, Auburn won the SEC Championship, one of four conference titles they would win under Pat Dye in the 80s. The Tigers tied Tennessee early in the season and then Syracuse in the Sugar Bowl. Their one blemish, though, was a doozie, a 34-6 loss at home against Florida State. So when the Tigers met up with the Noles at the conclusion of the 1988 season, there was some skepticism as to whether Auburn could play with Florida State. Auburn had allowed 79 points in eleven games with their only loss by a count of 7-6 in Baton Rouge, but they hadn't played an offense on FSU's level.

The game started with Florida State jumping out to a 13-0 lead early in the second quarter. However, the Tigers didn't lose control as they had the year before, clawing back to 13-7 by halftime. In the final two minutes, Auburn drove deep into Florida State territory before Deion Sanders picked off a pass in the end zone to seal the win.

However, two factors gave Auburn fans a sense of righteous indignation after the game. First, Florida State safety Dedrick Dodge had interfered with Tigers wide receiver Freddy Weygand at the one-yard line on the play before Deion's interception. Second, Deion's participation in the game was dubious to begin with after he had been arrested days before the game in Fort Myers after an altercation over a pair of earrings.

In this case, the loser of the game emerged with more honor than the winner.

Coming into the 1993 Orange Bowl, Nebraska was unbeaten, untied, and unfancied. After No. 2 Notre Dame upset No. 1 Florida State in the penultimate game of the regular season and then got upset at home by Boston College on the following week, the Huskers entered the bowl games as the No. 2 team in the country.

However, their defeat against Florida State was a foregone conclusion, and most of the discussion was whether the Noles would be No. 1 after that win or whether the Irish would win the national title with a win over unbeaten, untested Texas A&M. Nebraska was a 17-point underdog. The fact that Nebraska had lost their last five bowl games - two apiece to Florida State and Miami - by an average of 20.6 points factored into the pessimism.

Instead of the blowout that everyone expected, Nebraska stuck with the Noles from start to finish. The Huskers led for long stretches of the game, re-took the lead with 1:16 remaining, saw FSU go ahead with :21 remaining, and then missed the potential winning field goal on the last play of the game. Nebraska fans could point to a phantom penalty that cost their team a touchdown in the first quarter.

The game transformed Nebraska's reputation. They went from being seen as a paper tiger - one that could ring up impressive records in the Big Eight, but couldn't compete with elite programs - to being seen as elite themselves. And they accomplished this feat in a game they lost.

And with all of that in the rear view mirror, Northwestern fell behind USC 24-7, stormed back to take the lead in the fourth quarter, and only succumbed to the Trojans late in the game. Most Wildcat fans didn't expect that they would ever go to Pasadena to watch their team. Not only did they get to go, but they saw a terrific rally before Keyshawn Johnson finally proved to be too much. 1995 Northwestern had a great life and an honorable death. 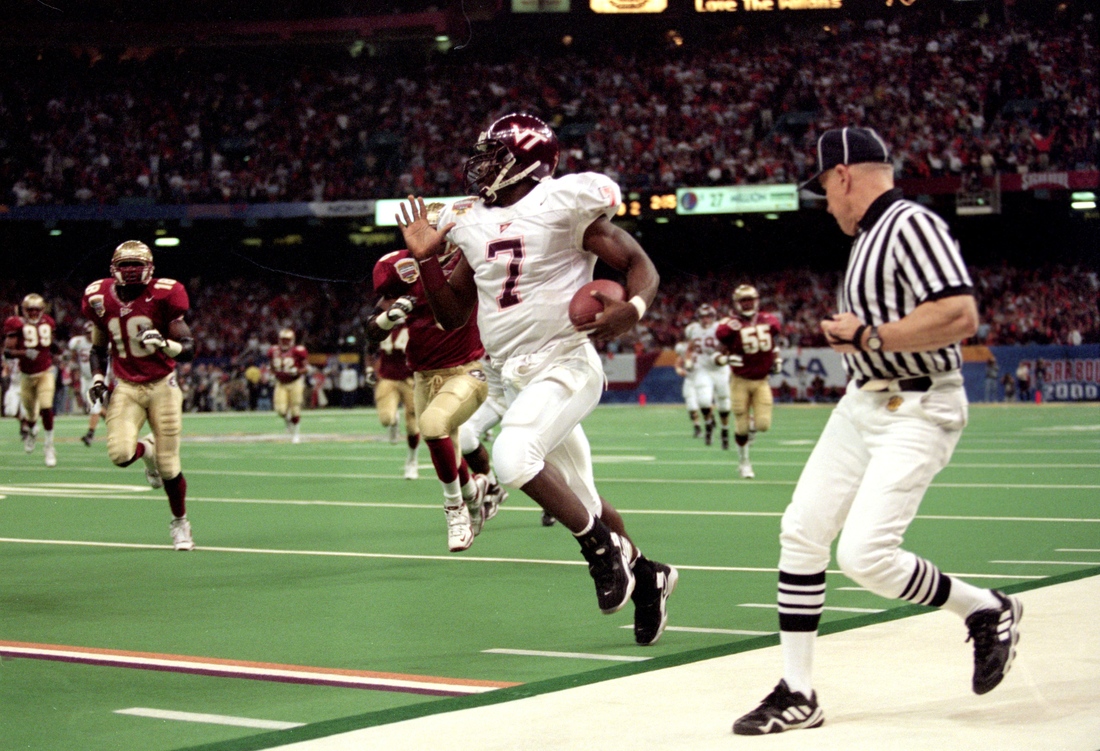 Every so often, we remember a big game more for the team that lost than the team that won. I doubt that I am alone in thinking of Michael Vick's third quarter as the indelible memory of the 1999 Sugar Bowl. Virginia Tech entered the game as a 5.5-point underdog after having gone unbeaten against a less-than-rigorous Big East slate. The Hokies were newcomers to the national stage. In contrast, Florida State was at the apex of its dynasty, as it was playing for the national title for the fourth time in seven years.

In the end, the Noles won 46-29, but the performance of Michael Vick against a typically great Seminole defense was the story of the game. It was one man against an army and the former led after three quarters. No Hokie fan could have left the Superdome that night with anything other than a sense of optimism about the future with a quarterback who had just completed his redshirt freshman season.

(Notice a theme with the good deaths? Three of the first four came against Florida State. During the Noles' dynasty, the most honorable demises were achieved by teams that could stay close to FSU.)

Texas entered the BCS National Championship against Alabama as a four-point underdog. They were up against the champions of a conference that had won three straight national titles. While the Horns had barely escaped an upset bid by Nebraska in the Big XII title game, the Tide had demolished Florida in the SEC title game, ending the Gators 22-game winning streak.

Expectations were low for Texas, and if you just looked at the 37-21 score by which the Horns lost the game, you would think that they died poorly. That conclusion would miss two rather salient points. First, Texas lost Colt McCoy, its star quarterback, on their first offensive series. Second, Texas dug themselves a significant hole with true freshman Garrett Gilbert under center and then rallied back to within 24-21 in the fourth quarter before running out of steam. All things considered, Texas acquitted itself quite well in the game, which is an odd thing to say about a major program losing a title game by 16 points.