2013 Army football's 10 things to know: Searching desperately for a defense

Two years ago, it looked like Army had turned a corner in its long battle to catch back up with Navy and simply provide sustained competence on the football field. Now, not so much.

Share All sharing options for: 2013 Army football's 10 things to know: Searching desperately for a defense

Rich Ellerson has been in charge at Army for four years. He inherited a program that hadn't seen a winning season or a bowl since 1996. Its rival, Navy, had far surpassed it in recent seasons. The Black Knights had put a decent defense on the field in two years (and six wins) under Stan Brock, but its offense was atrocious. He installed an option attack with a freshman quarterback, Trent Steelman, and with each passing year, Army's offense got better. It surged from 116th in Off. F/+ to 74th in 2010, stagnated a bit in 2011, then surged again to 60th in 2012. By the time Steelman finished his eligibility last year, Army was in possession of a decent offense with a truly strong running game.

So where does Army go now? Ellerson was able to see his offensive vision come to life with Steelman behind center, but now Steelman's gone, and the defense is undersized and completely ineffective. And if the D manages to improve in 2013, can the offense avoid offsetting it with regression of its own?

As we'll see below, the defense was an outright horror show in 2012. But it does have one thing going for it: It was quite a bit better for most of the last five games. One data point (the Temple game) skews that, but if you remove that game for a moment, you get this: 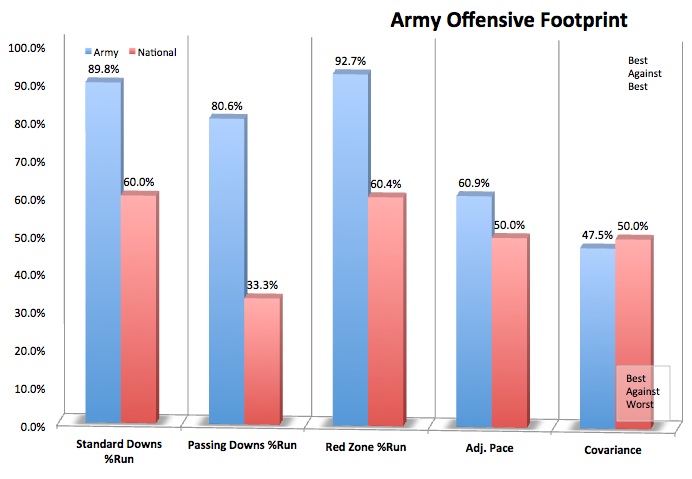 Not that this has anything to do with the 2013 team, but let's just say that it's really easy to root for Trent Steelman. He wasn't much of a passer, but the guy could run the option as well as anybody in the country, featured a fantastic first-step burst, and rushed for more than 3,000 yards and 45 touchdowns in his career. For most of his career, he did things like this. But in his final game, he did this. It was gut-wrenching to watch.

Steelman has now graduated, but before he fulfills the rest of his Army commitments, he gets a chance as a slot receiver with the Baltimore Ravens. It's probably fair to say that the vast majority of college football fans will be rooting for him.

For the first time since 2009, Army will be looking for a new starting quarterback. Both sophomore A.J. Schurr and junior Angel Santiago seemed to pass muster in spring practice. Schurr was the top backup in 2012, while Santiago got decent playing time in 2011, and in limited action, the two have produced stat lines that left something to be desired:

Schurr was more effective in his opportunities and started with the first-string offense in the 2013 spring game, so he is the odds-on favorite. But whoever wins the job will be following in the footsteps of one of Army's best quarterbacks in recent decades.

If you pound away with the option and run as frequently as Army does, you're going to end up with rushing yards whether or not you're particularly good at it. But it bears mentioning that Army was particularly good at it in 2012. Steelman and fullback Larry Dixon both showed strong explosiveness, while Raymond Maples and Malcolm Brown each took advantage of the opportunities they found on the outside. Plus, they ran behind a line that knew what it was doing. Army had to replace six players with starting experience and headed into 2012 with just 36 career starts up front. But after ranking fifth in Adj. Line Yards in 2011, Army ranked fifth again. Plus, the Black Knights were the best in the country at preventing negative plays on the ground. The backups and first-time starters were upperclassmen who had compiled a bit of experience here and there.

It's the same story in 2013. Of the eight players who finished 2012 with starting experience, five are gone, and Army returns just 26 career starts. But of the nine returnees listed above, four are seniors, and three are juniors. Throw in a pair of interesting sophomores (Matt Hugenberg and Justin Gilbert), both of whom have decent size and started with the first-stringers in the spring game, and you've got a unit that is a little bit less experienced than last year's line, but with a little bit more potential down the road.

(And no, we're not going to spend much time talking about the Army passing game here. It's not very good, but Army never passes. If the Black Knights fall into passing downs, the drive's probably over. But we knew that already.) 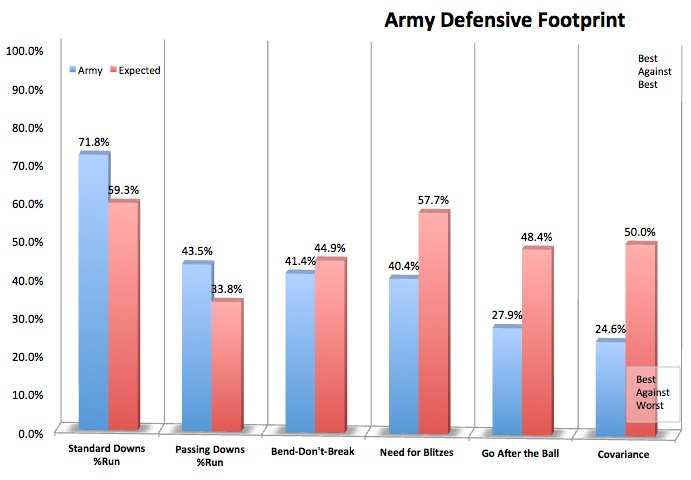 How do you go about fixing a defense that was this bad a year ago? Where do you start? For Ellerson, he didn't do anything drastic. Army has the same co-coordinators it did last year (Payam Saadat and Chris Smeland), and it appears it will be running mostly the same scheme. Steadiness works as often as the "freak out and change everything" approach, but wow, would it be tempting to change everything.

Despite what the stats above suggest, Army was actually pretty good at slicing into the opposing backfield. The Black Knights ranked 42nd in Stuff Rate (negative plays on the ground) and 39th in Adj. Sack Rate. Aggression did good things for them at times. But they pretty much had to be aggressive because if they weren't making a play, they were getting pushed around and dominated. There was, again, improvement at the end of the year, but for the season as a whole, the numbers were atrocious: 124th in Passing S&P+, 123rd in Passing Downs S&P+, 122nd in Standard Downs S&P+, 122nd in Rushing S&P+. Yuck.

Army's 58 tackles for loss really was a nice total for such a bad defense. And while star linebacker Nate Combs is gone, Army does return two interesting players up front: Robert Kough and Richard Glover. Now, to say the least, having two defensive tackles who average 243 pounds has plenty of built-in disadvantages. But the two can slice through the line at times, and sophomore end Ryan Alexander, a first-stringer this spring, brings some three-star upside to the table as well. This is a tiny, tiny line, but it wasn't Army's biggest problem last year, and it won't be this year.

The linebacking corps and secondary were almost totally bereft of play-makers in 2012. Linebacker-turned-safety Geoffery Bacon was asked to make far too many tackles but did make a few behind the line; but for the most part, the end-all, be-all on the Army defense was bandit linebacker Nate Combs, who made almost three times as many tackles for loss and sacks (12 and six, respectively) as the rest of the linebackers combined (4.5 and 2.5). He led the team in those categories, forced fumbles, and fumble recoveries, and he was second in passes defensed, and now he's gone. Plus, Bacon has moved to safety, leaving behind a linebacking corps that has no proven play-makers and wasn't very good even with Combs and Bacon.

9. Eric Osteen had a cannon

Aside from Combs, Army's best defensive weapon was probably kicker Eric Osteen, who consistently forced opponents to start from the 25-yard line. He's gone, too. I'm just not sure how the defense improves this year, even though it almost literally cannot regress any further.

And the 2013 schedule isn't amazingly forgiving, with just three teams projected 100th or worse. (Granted, six others are projected no better than 84th, but Army probably isn't going to rank 84th, so it needs all the help it can get.) The run game should be fine again, but unless some position changes and newcomers to the defensive rotation -- end Ryan Alexander, corner Shaq Tolbert, linebacker Tyler McLees -- can raise the upside considerably, I don't have much hope in this team.

Two years ago, it looked like Army had turned a corner in its long battle to catch back up with Navy and simply provide sustained competence on the football field. But the Black Knights lost major ground in 2011 and 2012, and I'm not sure how they get it back.