The master of SEC talk radio as combat sport joins ESPN and the new SEC Network.

The great radio silence has ended: Paul Finebaum, the troll-god of SEC sports radio, will begin a new "multi-tiered" media deal with ESPN starting August 1st. Finebaum, a longtime stalwart of the Birmingham sports scene, will move to Charlotte as part of an upcoming role on the SEC Network and a larger role on ESPN's television broadcasts.

Finebaum may not be familiar to a broader national audience, so I'll help with a few comparisons.

Imagine a more demure Colin Cowherd. Now take him and give him a pinpoint focus on college football, and half the number of words he uses. Take those long pauses, and fill them with phone calls taken from the lunatic fringe of Alabama college football fans expressing opinions several standard deviations from anyone's definition of sanity. Let the callers string themselves out as far as entertainment value will take them, and sometimes combine with other callers for on-air bareknuckle brawls.

This description makes Paul Finebaum sound like a mental health nurse who makes patients fight for his amusement, and then collects a good share of the bets as bookie. That would not be inaccurate, though ESPN PR's "moderator-slash-provocateur" is a kinder, slightly less accurate description of what he does.

Like Mike Francesa, he is a regional talk presence with some national reach. Unlike Mike Francesa, he has never fallen asleep on air, and knows something about college football. Profiles have been done on him by prestigious national publications, and with reason: he is something of a big deal, and at its best, the show's anarchy is addictive and required listening.

Finebaum's time on air in Birmingham is most notable for the Harvey Updyke case, where an Alabama fan called the show to boast of poisoning the iconic Toomer's Corner oaks at Auburn, Alabama. Finebaum has also made television appearances on programs like Outside the Lines, where he berated Bomani Jones for badmouthing "the South" despite Jones being from Houston, Texas and attending Clark Atlanta University. 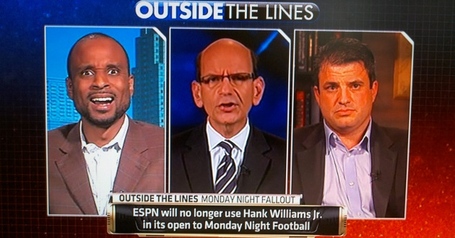 Terms of Finebaum's undoubtedly lucrative five year contract with ESPN, which laid off hundreds of workers Tuesday, were not disclosed.