The use of an active college football player's name contradicts the NCAA's statements in the Ed O'Bannon case.

EA Sports used Tim Tebow's name in a playcall in its NCAA Football 10 game, which was released in July 2009, prior to Tebow's senior season at Florida. The use of Tebow's name, discovered by an SB Nation reader and verified by SB Nation, comes in a handful of plays out of a formation called Shotgun Twin QB Tebow: 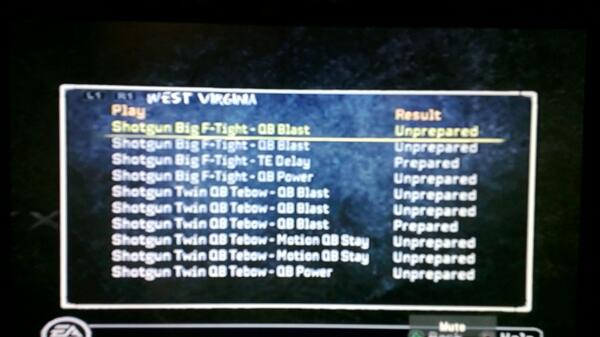 Using a player's name while he was still playing college football contradicts statements made by both the NCAA and EA Sports regarding the licensing of player names and likenesses. On May 9, 2009, just over two months before the game was released, an NCAA spokesman said, "Our agreement with EA Sports clearly prohibits the use of names and pictures of current student-athletes in their electronic games. We are confident that no such use has occurred." Eight days after the game debuted, the NCAA "categorically denie[d] any infringement on former or current student-athlete likeness rights."

The NCAA again denied real players have been used in NCAA-licensed video games a month ago.

The formation and playcalls are exclusive to Florida's playbook (the player in question was using Florida's playbook at West Virginia). While the full formation name is shortened during gameplay, the full title is revealed in the Game Prep feature in Dynasty mode. The name of the play also shows up on the left side of the screen during gameplay in this mode (again via @Dr_Doughstax and later verified by SB Nation): 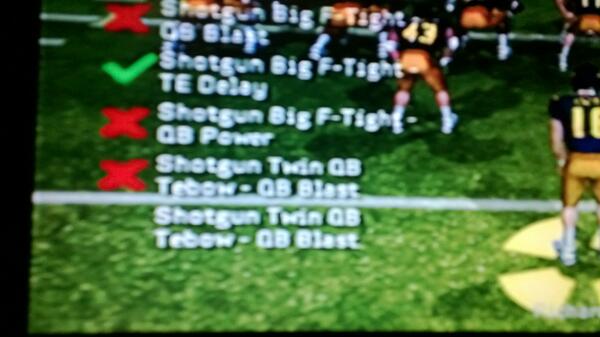 The formation, with the quarterback in the shotgun and two running backs placed two yards ahead of him, was a formation commonly used by Florida during Tebow's time in Gainesville.

Former UCLA basketball player Ed O'Bannon, former Nebraska and Arizona State quarterback Sam Keller, and a number of other players have sued the NCAA and Electronic Arts for violation of antitrust laws, based on their use of player likenesses in video games and other NCAA-licensed items.

EA Sports, which lost an appeal in a related case Tuesday after arguing it had a First Amendment right to use player numbers, has also denied use of player likenesses or names. A former EA Sports producer has claimed the company did use player likenesses.

The timeline of EA Sports' 'NCAA Football' video game series: Will it return?