2013 Tennessee football's 10 things to know: A pretty (and blank) canvas

New Tennessee head coach Butch Jones inherits a team that will be strong in the trenches and who-the-hell-knows just about everywhere else. Former coach Derek Dooley left him a cupboard that was far from bare, but will Jones be able to engineer enough of a turnaround to get the Vols to their first bowl in three seasons? For more Vols, visit Tennessee site Rocky Top Talk.

Share All sharing options for: 2013 Tennessee football's 10 things to know: A pretty (and blank) canvas

1. Probably the right time for a move

One of the reasons I was pretty high on Texas A&M last summer, despite the fact that starting a redshirt freshman at quarterback is usually a scary proposition (whoops), was because, from a blank-slate perspective, the Aggies were loaded with former star recruits and players who, in a vacuum, had produced at a high level at times. The 2011 Texas A&M team had a lot of both baggage and potential. It seemed the perfect time for a new head coach, with a new attitude and outlook, to take over in College Station. Sure enough, some of those underachieving pieces began to achieve at a higher level; throw in a new, exciting (to put it mildly) quarterback, and voila: an 11-2 season for Texas A&M.

Now, I'm not going to say Tennessee is this year's Texas A&M. Not even close. The Aggies' underachievement in 2011 was situational -- A&M was a Top 15 team on paper in 2011, tainted by bad luck and late-game execution; meanwhile, Tennessee's record and F/+ ranking (5-7 and 57th) matched up quite well.

Still, when you see how many former four-star recruits will be taking the field this fall, and you see how good the offensive line is, and you see how marred the back of Tennessee's defense was by injury, you can at least talk yourself into Tennessee being a Top 30 to 40 team in Butch Jones' first year in charge.

I'm typically a fan of giving a coach at least four years before firing. Sometimes you can justify three years, and on rare occasion you can justify two (call it the Jon Embree Amendment); in Tennessee's case, I think the Vols were justified in dumping Derek Dooley just 36 games into his tenure in Knoxville. Not only were the Vols underachieving, but it was conceivable that a new coach could come in and turn those underachieving tendencies around pretty quickly.

Jones inherits a team that is, at the very least, intriguing. An entirely new passing game might take a while to develop, and the defense is still an enormous question mark, but there is potential here. And if you ignore the terrifying top end of the schedule, there are some wins to be found in 2013 as well.

2. It just never all came together

A team with Tennessee's 2012 offense and 2011 defense would have ranked in the top 30 and probably won seven to nine games in 2012. And in that situation, Dooley is still the head coach in Knoxville.

Ifs, buts, candy, nuts, et cetera. With its recruiting rankings relatively high, Tennessee should have been able to overcome some of the injuries it didn't overcome. That's on Dooley to an extent. Now Jones, who took over at Cincinnati when Brian Kelly left for Notre Dame and went 19-6 after a first-year step backward, gets a chance to do what Dooley could not and produce a roster with both explosiveness and depth.

The 2012 season certainly began with promise. Tennessee whipped N.C. State, put up a solid fight against Florida for three quarters, and endured some bad breaks against Akron to eventually win comfortably. The defense showed some glitches against Florida but at least played at a reasonably average level in the season's first month.

And average would be good enough to win some games with a devastating passing game. But slowly, attrition in the secondary began to have an effect. Safety Brian Randolph played only three games, corner Marsalis Teague seven. Only three of the top seven defensive backs played in all 12 games, and the linebacking corps dealt with some issues as well. This wasn't a very deep unit to begin with, and in terms of Adj. Points, the defense was about four points worse in October and November, months that saw the Vols lose two games by three points. 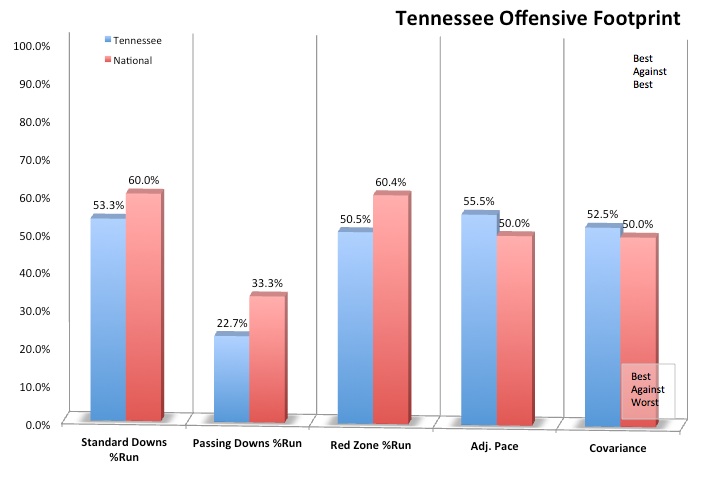 Led by a stellar line and extreme passing downs efficiency, Tennessee's offense played at a rather high level for most of the season. The line should be stellar once again, and the top two running backs return, so new offensive coordinator Mike Bajakian (Jones' O.C. at Cincinnati) should be able to lean on the running game in 2013.

But the passing game was the star for Tennessee, and all of the primary pieces of that passing game are gone, namely Tyler Bray and his top four targets. Last year's backup, Justin Worley, barely played (and looked far from amazing when he did), and the top returning targets are two running backs and a receiver who averaged 2.3 yards per target last year. There are former four-star recruits everywhere you look -- quarterback Nathan Peterman, running backs Rajion Neal and Marlin Lane, receivers Alton Howard, Drae Bowls, Jason Croom, Marquez North, and Paul Harris -- but they are all ultra-young and completely unproven. This is probably going to take some patience. 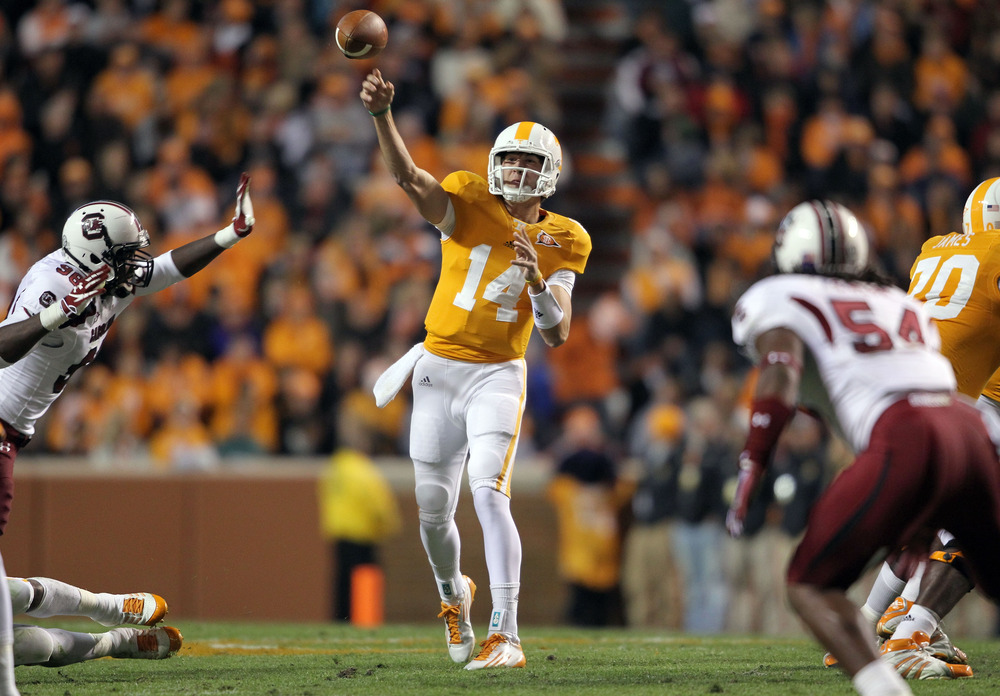 Both Rajion Neal and Marlin Lane (suspended for spring but supposedly returning) have showed decent between-the-tackles abilities; plus, Lane in particular has shown at least a little bit of open-field ability. He's also one of the best pass-catching running backs in the country. His return would give the running back unit an enormous boost.

Both backs had it pretty easy last year, however, running behind a line that gave them quite a few opportunities. There were issues with stuffs (negative plays on the ground), and the line's sack rate was done favors by Tyler Bray's throwaways (he was quick to throw the ball into the stands if pressure started coming and receivers weren't open).

But this was still one of the conference's better offensive lines; in 2013, the line returns six players with starting experience (including four seniors) and 124 career starts. All-conference guard Dallas Thomas is gone, but this will still be one of the best lines in the SEC. And if you've got to start an unproven quarterback with unproven receivers, a quality line can do you some enormous favors. 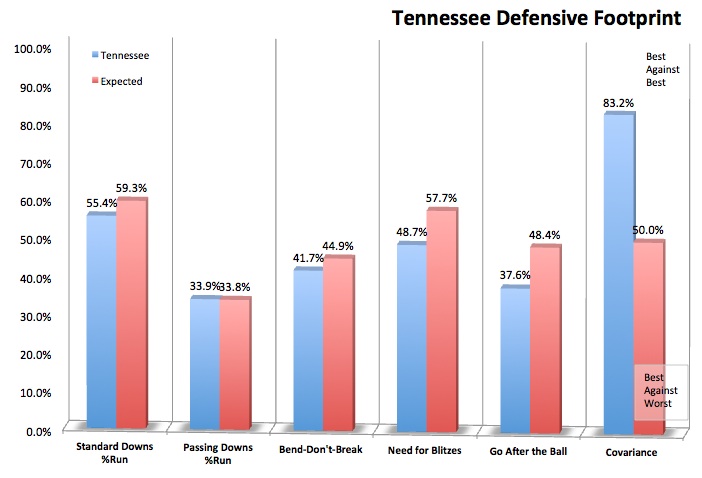 6. Mediocre at almost everything

Tennessee's injuries occurred mostly in the secondary, but it's not like the pass defense was really any worse than the run defense. The Vols were good in the red zone, good in short yardage (where mammoth tackle Daniel McCullers came in most handy), absolutely atrocious in preventing big plays on the ground, potentially even worse at rushing the quarterback, and between mediocre and below average at everything else.

The pieces weren't right for a smooth conversion to Sal Sunseri's 3-4 defense, and it appears that new coordinator John Jancek (who also comes to Knoxville from Cincinnati) will move back to a mostly four-man front. That could fit the personnel well, as frankly there are more experienced, potentially high-quality linemen than linebackers. End Jacques Smith has played both end and OLB in his career, tackles McCullers and Couch make for a big, relatively active combination, and A.J. Johnson should be just fine at middle linebacker.

7. Lots and lots of four-stars

Again, if you're an incoming coach, you have to love it when the previous coaching staff(s) recruited relatively well. After a while, a four-star rating ceases to mean anything, but players like Johnson, McCullers and Smith have certainly shown four-star potential. Plus, others like corner Justin Coleman and LaDarrell McNeil have begun to compile a decent amount of experience, and a new load of four-star freshmen and redshirt freshmen enter the rotation this fall. Jancek and company still have to figure out how to coax potential into production, but the upside is there.

Of course, upside often presents itself in the form of disruptive stats ... and Tennessee just didn't have many of those in 2012. Only one player had more than seven tackles for loss, only one had more than two sacks (Darrington Sentimore, who is now gone), and only one defensed more than six passes (safety Byron Moore, who is probably not going to have more INTs than PBUs in 2013). Jancek's Cincy defenses were reasonably effective (29th in Def. F/+ in 2012 despite, obviously, lesser recruiting rankings) and active (ninth in passes defensed last year, 28th in forced fumbles, 54th in tackles for loss). If this defense finds a higher level of (successful) aggression, its ceiling starts to match its recruiting rankings.

Experience is a double-edged sword, however. Both the offensive and defensive lines are loaded with seniors; if other units (quarterback, receiver, defensive back) hold the Vols back, and they don't improve much in 2013, then 2014 could see another sideways step as the pass offense and defense improve and the lines start from scratch.

The only thing that makes people happier than a star linebacker coming in to score short-yardage touchdowns is a defensive tackle doing the same. The 2012 season wasn't very much fun for Tennessee, but big defenders scoring offensive touchdowns always brings a smile to this college football fan's lips; that said big defender is also a good linebacker is just a bonus.

During his recruitment, Cordarrelle Patterson compared himself to Randy Moss and DeSean Jackson. His receiver skills did not quite match that incredible combination, but when he was returning kicks and punts, damned if he didn't look like Jackson in Moss' body. Patterson's vision and open-field running ability were outstanding, and as much as he will be missed in the receiving corps, his special teams might be even more missed. This was a pretty average special teams unit overall, but Patterson gave it quite a bit of upside.

There are two ways to look at Tennessee's 2013 schedule:

A) Holy crap, three road games versus top-five teams? Five against the top 20? This is the hardest schedule in the country!

B) Hmm, seven games versus teams projected 39th or worse? Yeah, Tennessee can get back to a bowl this year.

Calling this schedule top-heavy doesn't really do it justice. Tennessee plays only two teams projected between ninth and 49th, with between four and five built-in losses and between three and five built-in wins (depending on your level of optimism). Those middle games -- South Carolina, at Missouri, Vanderbilt -- will probably dictate whether the Vols go bowling for the first time in three years.

Honestly, this should be a pretty good team. The passing game is cause for alarm, and until we see the defense playing at a more aggressive level (and doing it relatively successfully), we don't know that it will. But if you look at players and units as blank canvases, you have to like the potential just about everywhere. The offensive line will be good to great, the front seven should conform well to Jancek's 4-3, the running backs will be competent to good, and the secondary, if healthy, should improve. Butch Jones has had a very positive offseason in terms of P.R., and he should find a lot to like about the personnel he inherits.

But will it be enough? Will Tennessee's strength in the trenches overcome its extreme inexperience elsewhere? The Vols did go 0-3 versus the three teams referenced as the "middle games" above -- will they improve enough to offset the fact that those three times will potentially improve as well?