Instead of buying out Kirk Ferentz's contract, the University of Iowa could make the following wise investments.

Share All sharing options for: A comprehensive list of things Iowa could buy with Kirk Ferentz's buyout

The other day, Iowa Hawkeyes head coach Kirk Ferentz decried the spreading influence of money in college athletics. This is funny for several reasons, but you don't really need to go past the fact that Ferentz is paid $3.8 million a year to coach Iowa's football team, and does so while providing a comically small return on investment. In situations like this, schools would normally cut bait and fire the coach, but Ferentz is protected by a buyout that makes his contract look downright reasonable.

If you want to see how Ferentz's buyout is calculated, Patrick Vint has a clear breakdown over at Black Heart Gold Pants. For those of you who don't really care how the sausage is made, if Iowa were to fire Ferentz today, the school would have to pay a buyout of $17,531,360.

That is a vast sum of money for any purpose, but it is a preposterous amount to pay a man in order for him to stop coaching a college football team. There are countless ways in which the University of Iowa could make more productive use of those funds, so let's go through some of them, shall we?

501,039 boxes of printer paper which they could use to print things on, such as this: 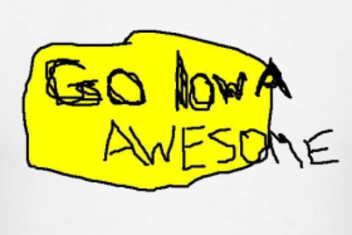 35,152 iPads, on which Greg Davis can diagram screen passes

17,531,360 beers on dollar beer night at Iowa Cubs games, which is a respectable amount of beer

774.8 pounds of pure gold, which can be used to fashion a statue commemorating this moment: 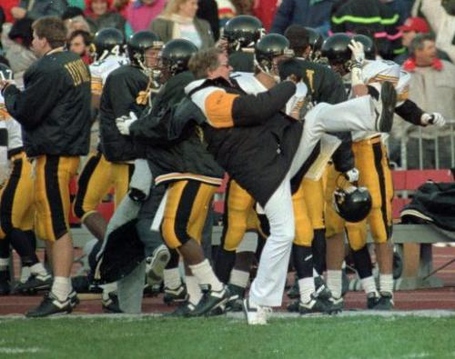 10,625,066 grande coffees from Starbucks, which then should be thrown on the ground because Starbucks makes terrible coffee

Jet skis, and lots of 'em

292,433 pairs of New Balance MW411s, an outlandish dad shoe that I can personally guarantee Ferentz wears around the house and sometimes sleeps in when it gets cold 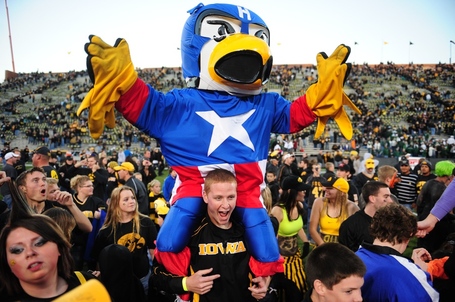 An amount of cheese I care not to calculate

The entire contract AND buyout of a new head football coach, which would really do the trick, I think

• Bill Connelly on the never, ever boring Ole Miss Rebels

• Wait, how fast is Braxton Miller?