This week in ENHANCE, we look at the glories of early 1990s Arkansas football, reviewed.

Today, we use the powers of Enhance! to look at the 1994 Arkansas football team's recruiting video, a slice of time from a moment in American history where a 5-5-1 Razorbacks team could retroactively finish first in the SEC West, and when a man could wear white designer overalls to a football game without people batting an eye. (Via)

:38 There is a man in what appear to be white Z. Cavaricci overalls. This is 1994. There was no internet to tell you what was horrible. Someone literally had to point and laugh at you in person, and exclaim how horrendous the thing you were wearing was. That person no longer has a job thanks to the internet, and we are very sorry about that, Janeane Garofolo. That was a pretty great job.

1:20 I'm totally oblivious to remembering that Danny Ford actually coached at Arkansas thanks to a really confusing remix of Janet Jackson's "Alright." They describe Danny Ford's first squad as "finishing second in the SEC West in 1993."

This is by record true, but only because the undefeated Auburn Tigers were on probation. Later, Alabama would have to forfeit those 1993 wins due to NCAA trouble. So correct yourself, Arkansas fans: THAT'S A WESTERN CHAMPIONSHIP FOR THE HAWGS. COUNT IT, BOYS. Danny Ford would be fired in 1997 after going 26-30-1. He still has a swimming pool shaped like the Clemson Tigers emblem in his backyard, though.

2:13 This version of "Arkansas Fight", courtesy of the Fat Boyz producer. Or, if you believe Celebrity Hot Tub:

The synth version of the fight song was originally planned for SUPER CALL THE HAWGS, a platform for the Super Nintendo system in which the player controlled a cartoon version of the Arkansas mascot as he tried to eat every piece of salami in the United States. After the project was abandoned, it would later be hastily reprogrammed and released as "Cool Spot."

4:32 Arkansas the state has outdoors activities, and oh snap-- 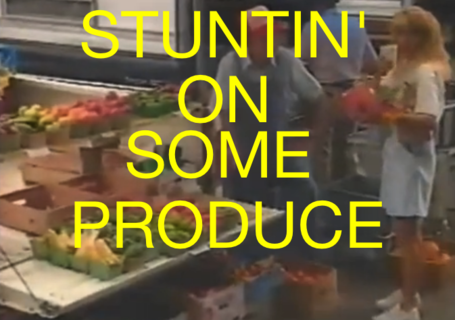 5:30 Steve Atwater describes the football team as "the nucleus for the state of Arkansas." This makes Arkansas sound like an element. This makes me think about which element Arkansas is. This makes me think to start looking in Poisoner's Row, right there in period six. Polonium? Sure, Polonium works. (Calm down, Big Ten: you're the noble gases, and always have been.) 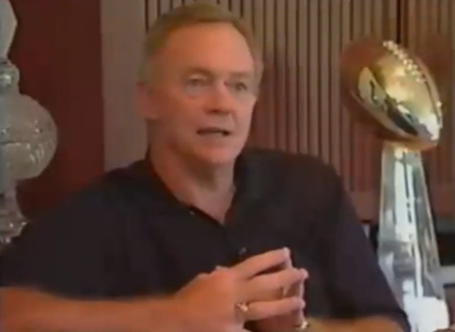 That's pre-facelift Jerry Jones, back when he had a good bit of scotch-and-steakhouse weight on him and had just decided to put Barry Switzer in charge of a professional football team. He looked like this for another two years until he realized that he had actually put Barry Switzer in charge of the Cowboys, and then aged twenty years in one horrible night in Aruba. (P.S. Jerry Jones has never looked young.)

7:30 Science said it was impossible to combine Ted Danson, Steve Guttenberg, and Tom Selleck into one person. Billy Ray Smith proved them wrong.

8:45 Pat Summerall says he "learned to survive in a people world" at Arkansas. Pat Summerall rarely spoke of his childhood on Ostrich Island. When he did, Summerall usually broke down crying talking about how no matter how much they tried, the wings of that great bird can neither fly, nor hug a child in need of love.

10:35 The video really starts to lose momentum at this point, and yet just when you thought it was going to peter out completely-- 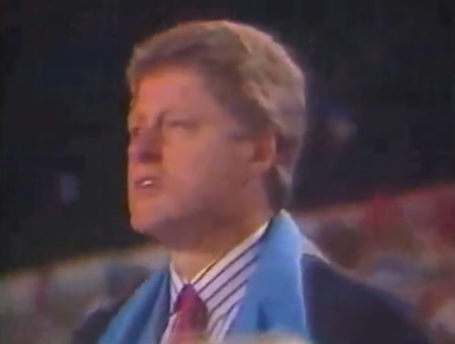 Billiam Hawgerson Clintonbacon himself, right there in his McDonald's-chomping 1993 prime. It's not just "come to Arkansas, and possibly have the President cheer you on, son." It's "Come to Arkansas, where the President most likely to shotgun a few beers in the back of a convenience store in West Memphis with you will cheer you on. In fact, he's going to be doing that after the game anyway, so you should probably just come to play football at Arkansas."

13:39 After showing some big nerdy blocks of computers and "computer terminals" open 24 hours a day -- and oh, let's just imagine what someone was posting from a public computer on USENET at 3 a.m. in the U of A labs in 1994 -- we get the closing pitch of the 1994 Arkansas football recruiting video. 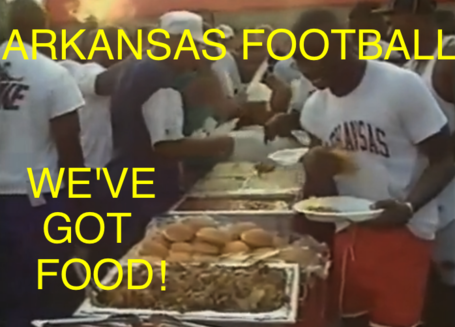 • What should we expect from Jadeveon Clowney this year?

• Bacardi and cigars: an ode to dead bowl games

• Why did Bret Bielema go after a FSU coach on Twitter?