2013 Boise State football's 10 things to know: Back on the ascent

Boise State lost almost all of its starters and fell apart in 2012 ... all the way to 10 wins and a Top 25 ranking. Unacceptable. Can these ridiculously disappointing Broncos bounce back toward respectability in 2013? (Spoiler: Yes.)

Share All sharing options for: 2013 Boise State football's 10 things to know: Back on the ascent

For Boise State, the 2012 season was about taking a breath. After setting off on an absurd path of destruction for four years (50-3 from 2008-11), the Broncos lost nearly every starter last fall, replaced yet another offensive coordinator, and basically had to re-learn how to win football games with a new cast of characters.

This is a Chris Petersen team, of course; the Broncos did alright. They fell to No. 21 in the F/+ rankings (their lowest ranking since No. 36 in 2007) and only won 10 games, but now a likely ascent begins again.

The ascent might only be minor in 2013, however. This very much strikes me as a Top 15-20 team, but perhaps nothing more. Boise State has been thinned out considerably on its defensive front, and the offensive line still needs to prove it can open up running lanes better than it did in 2012.

But make no mistake: This program is still the class of the mid-major universe. The Broncos could get a stiff challenge from either San Diego State or Fresno State (or both) in-conference this year, but they passed a major test last year by simply surviving and continuing to play at a high level. They'll do so again in 2013.

If nothing else, Boise State got a taste of what it's like to actually have to play competitive games in 2012. That experience cannot hurt moving forward. In the previous five seasons, the Broncos had played in a total of just 10 games decided by one possession; they fared perfectly well in these games, going 6-4, but in 2012 alone, they played six such games, going 4-2. Tight losses to Michigan State and San Diego State prevented this from being another extraordinarily successful season, but tight wins over BYU, New Mexico, Nevada, and Washington kept the win total in double digits for the seventh consecutive year and for the 10th time in 11 seasons.

The offense picked up steam late in the year, just in time for the injury-addled defense to lose some of its own.

Again, though, 2012 was just about surviving and regrouping. Boise State did that. Now let's see what the Broncos have moving forward. 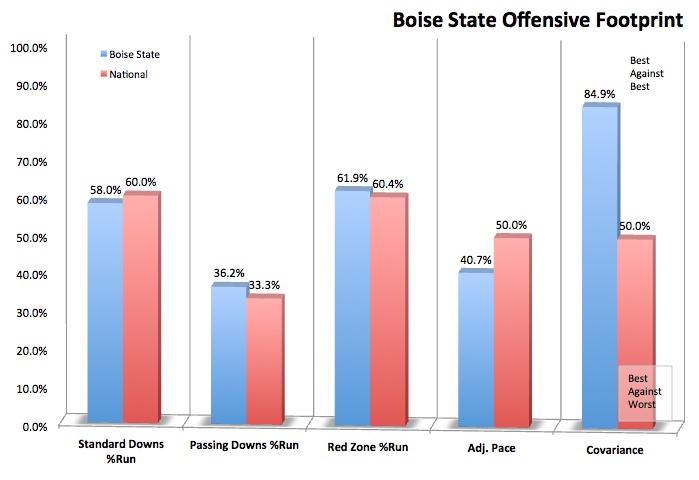 To be sure, Boise State missed quarterback Kellen Moore's ridiculous precision last fall. But while the Broncos' efficiency numbers went down (from ninth in Success Rate+ to 23rd), it was their explosiveness that suffered more in replacing not only Moore, but also running back Doug Martin, receiver Tyler Shoemaker, and company.

This was especially true in the passing game, where Boise State sank only from second to fifth in Passing Success Rate+ but from 14th to 34th in Passing PPP+. Only one of quarterback Joe Southwick's top six targets averaged better than 8.0 yards per target, and that was low-efficiency tight end Holden Huff at just 8.6. Shoemaker had averaged 10.5 per target in leading the 2011 receiving corps; you could pretty easily make the case that Boise State missed Shoemaker more than Martin.

When Boise State needed six yards on third-and-6, it got six yards and nothing more. There weren't enough big plays to maintain an elite level of offensive play. With sophomore running back Jay Ajayi coming into his own (he appears to have D.J. Harper-before-the-17-knee-injuries potential), and with one more year for potential to meet production for intriguing senior receivers Aaron Burks and Geraldo Boldewijn, we should see improved explosiveness numbers for BSU. How much improvement remains to be seen.

4. Get in line (at quarterback)

Until this week's announcement that sophomore quarterback Jimmy Laughrea had left the team, Boise State had a perfect totem pole of three-star quarterbacks waiting their turn, one per class. Regardless, there are now only four interesting quarterbacks on the roster, three of whom will likely spend another year behind incumbent Joe Southwick, who suffered in comparison to the incomparable Kellen Moore but held his own for the most part, especially late in the season.

His 67 percent completion rate would be great anywhere other than Boise (where Moore completed 74 percent in 2011), and after some shaky early performances (15-for-30 with a pick against Michigan State, 11-for-22 with a TD and a pick against Fresno State), he was mostly strong down the stretch. In his last four games, he completed 79 of 113 passes (70 percent) for 888 yards, nine touchdowns, and no interceptions. That's not only acceptable, but good. Plus, he accounted for over half of his season rushing yardage in the final two games. If he gets hurt, Boise State has plenty of other options, but it appears he'll have to get hurt to lose his starting job. 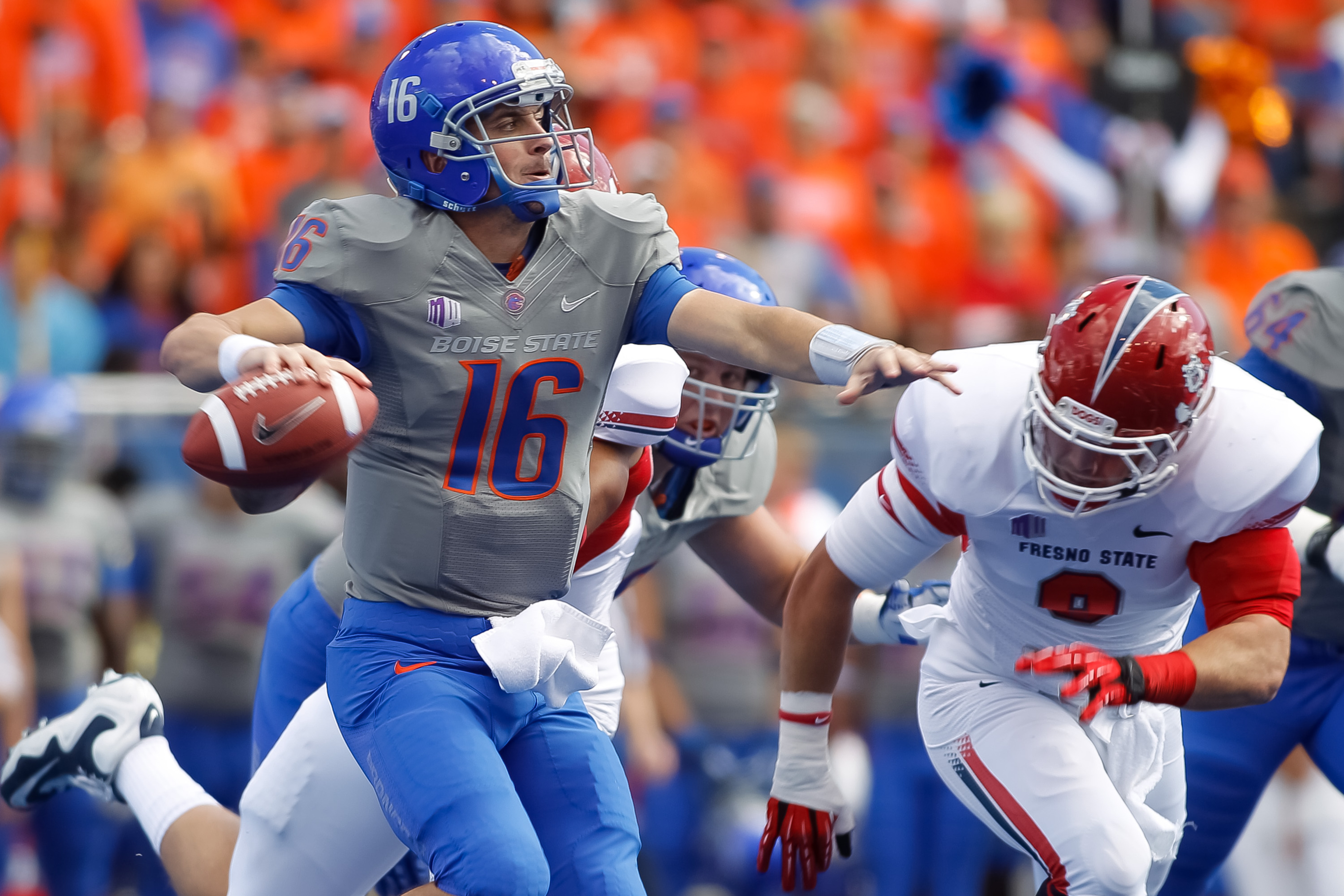 5. Bouncing back up front

Boise State's quick, precise passing attack is always going to produce a strong sack rate; defensive linemen just don't have enough time to get to the quarterback. Boise State ranked first in Adj. Sack Rate in 2011 and sank only to fourth last fall.

But an iffy set of run blockers (65th in Adj. Line Yards in 2011) got iffier with the loss of two all-conference, three-year starters, sinking to an unacceptable 80th in Adj. Line Yards. The line just wasn't very good at anything related to the ground game -- 101st in Opportunity Rate (creating downfield opportunities for your runners), 99th in Stuff Rate (negative plays on the ground), 94th in Power Success Rate (short yardage opportunities).

This not only must improve, but it must improve while replacing three more starters. Perhaps the two best linemen return, and two other seniors could be in line to start, but it wouldn't be the worst thing in the world if some new blood like Travis Averill worked into the rotation. For what it's worth, it appears sophomores Rees Odhiambo and Marcus Henry looked good this spring. 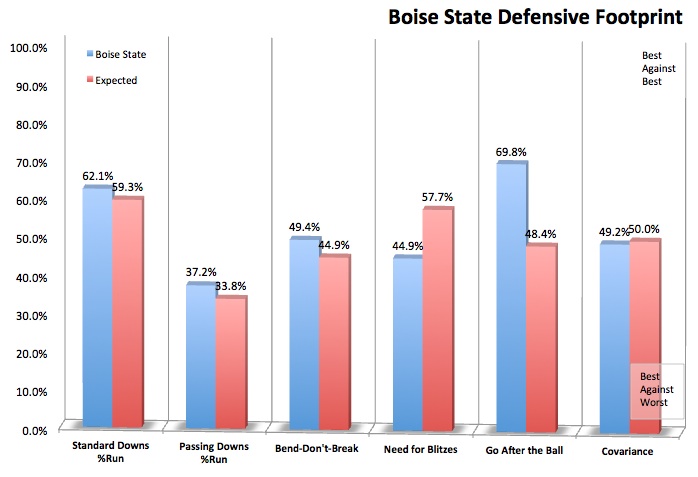 During Boise State's 50-wins-in-four-years run, Kellen Moore and the offense got the lion's share of the attention; and that's fine. It really was a clinical offense. But the defense actually graded out better than the offense in all four years of that run. Tasked with replacing five of the top six on the line, two of the top three at linebacker, and four of the top five in the secondary, the Broncos did sink a bit defensively in 2012, from an average Def. F/+ ranking of 7.5 over the previous four years to 17th in 2012. But sinking to 17th isn't exactly an embarrassment, and I just cannot worry too much about this unit, even as it goes about replacing a few more interesting pieces in 2013.

One did have reason to question the overall depth in 2012 (look at the per-quarter defensive rankings above), but there is potential everywhere you look on this defense, from ends Demarcus Lawrence and Tyler Horn, to linebackers Tyler Gray and Ben Weaver, to tackle Ricky Tjong-A-Tjoe, to young safeties Jeremy Ioane and Darian Thompson. The defense will be fine; it probably won't be as good as it had been, at least not until we see some of these younger plays step up, but it will be fine.

7. Thinned out a bit

That said, the depth up front is a particular concern. Starting end Sam Ukwuachu was dismissed from the program this week, leaving behind an intriguing trio of Lawrence, Tjong-A-Tjoe, and Horn, but almost no proven production beyond those three. Because of Lawrence and Horn, tackle will be the bigger concern -- the defense took a definitive step backwards when star Mike Atkinson went down last season, and now Boise State must replace two of the guys who helped replace Atkinson. Between Armand Namce, Elliot Hoyte, and a pair of junior college transfers (including mid-year enrollee Deuce Mataele, who had his moments this spring), at least a couple of disruptive options need to emerge.

The Boise State line of previous years was as dominant as any in the country. There is potentially some elite talent here, but is there enough of it?

If the line holds up, the rest of the defense should fill out pretty well despite attrition. Both starting linebackers are gone, but Blake Renaud saw plenty of time last season, Tyler Gray worked his way into the rotation as a freshman, Ben Weaver was the scout team MVP last year, and three exciting freshmen join the mix. In Boise's 4-2-5 setup (where the nickel back almost counts as both a linebacker and a safety), the linebackers' jobs are basically to clean up messes and direct traffic. I think this unit will do that just fine.

If there's a concern outside of tackle, it comes at cornerback, where both Jamar Taylor and Jerrell Gavins must be replaced. Donte Deayon was a spring game star, and it appears there is a wealth of options, but none of those options made an impact last year. To say the least, that will have to change.

Boise State's long-standing kicking problems took a step forward in 2012, with Michael Frisina at least proving pretty reliable inside 40 yards. But Frisina's gone now, and that won't help stabilize what was an all-or-nothing unit. Scatback Shane Williams-Rhodes has all sorts of potential as a kick returner, but Trevor Harman wasn't that great as either a punter or a kickoffs guy, and punt returner extraordinaire Chris Potter is gone.

Special teams have played a role in most of Boise State's recent losses -- San Diego State returned a kickoff for a touchdown in 2012, and missed field goals haunted BSU against both TCU in 2011 and Nevada in 2010 -- and this unit looks just shaky enough to rear its ugly head again in 2013.

9. The best teams on the road

Boise State's schedule, at first glance, isn't particularly impressive. The Broncos play only one team projected in the F/+ Top 40 -- No. 27 BYU -- and the non-conference schedule doesn't feature an elite team like it has in previous seasons. But wow, are the home-road splits troubling. All four of the projected Top 60 opponents on the schedule will play host to Boise State this fall, and this team is just thin enough that I don't think it will survive those trips undefeated.

In all, I do think this is a team capable of re-entering the F/+ Top 20, perhaps even the Top 15. Jay Ajayi is a potential star, Joe Southwick should be good enough, the offense should improve, and the pass rush will be strong once again. But there are just enough limitations, just enough depth issues, and just enough landmines on the schedule that I assume something like 10-2 is far more likely than 12-0. That this feels disappointing tells you a little bit about where Chris Petersen has taken his program; in all, though, it looks like it will be at least one more year before Boise State re-enters into the land of college football's elite.

The Broncos will have to settle for merely being very good again in 2013.

10. The Mountain West balance of power