New Mexico State spent most of 2012 wondering if it had a future at the FBS level (and playing like it didn't). But the Aggies now have a new coach, a new future conference, and a new lease on life. There's nowhere to go but up for the NMSU program, and it should go up at least a little bit in 2013.

1. This is the hardest job in FBS

Using Sports-Reference's SRS ratings, the best New Mexico State team of the last 40 years went 7-5 (with no bowl), lost to a 4-7 Utah State team, and ranked 75th in FBS. The Aggies have not attended a bowl since its 11-0 squad of 1960 went down the road to beat Utah State in the Sun Bowl in El Paso. The team has more 0- or 1-win seasons in the last 40 years (eight) than winning seasons (three). The last two head coaches have left Las Cruces with records of 11-38 (Hal Mumme, 2005-08) and 10-40 (DeWayne Walker, 2009-12). Walker left in late-January to become the 2-14 Jacksonville Jaguars' defensive backs coach, and despite a pretty strong industry based completely around the coaching carousel, barely anybody outside of New Mexico noticed.

Shall I go on? Home attendance in 2012 was 25,211 for the big in-state battle with New Mexico (a 27-14 loss) but averaged just 12,053 for the other five games. And when the WAC fell apart, New Mexico State couldn't immediately find a home and had to go independent for the 2013 season.

This is a hard job, one that has destroyed quite a few résumés through the years. And it will probably destroy new head coach Doug Martin's résumé as well. There is no base of talent to recruit, and there is no history of success on which to lean.

But there's always hope. The Sun Belt will be bringing both NMSU and Idaho aboard in football starting in 2014, so the hard(er) life as an independent won't last very long. Plus ... this is college football. A ULM team with revenue less than half that of NMSU's just went 8-5, beat Arkansas, and made a bowl in 2012. A UL-Lafayette team with revenue only slightly better than ULM's has gone to two straight bowls. Kent State, a team that hadn't been to a bowl in 40 years, damn near made a BCS bowl last year. With quality coaching and a little bit of lightning in a bottle, any FBS team can win some games. So instead of the doom and gloom that could easily pervade a preview of a team that almost faced demotion from FBS last calendar year, let's see how positive and hopeful we can be. The remaining nine things in this NMSU preview are all intended to look at the bright side of life.

NMSU probably won't be very good in 2013 -- I'll say that out front -- but there's always reason for optimism in the offseason.

2. Doug Martin is back

He knows tough jobs. At Kent State, he came oh, so close to turning the corner at a program that hadn't turned a corner in ages; he went 5-6 in 2004, 6-6 in 2006, and 5-7 in both 2009 and 2010, but he couldn't ever get Kent State into the postseason and resigned following 2010. He spent a year as DeWayne Walker's offensive coordinator at NMSU, improved the Aggies from 119th in Off. F/+ to 94th, then took the same job at Boston College and coaxed a bit of improvement out of the Eagles (they improved from 101st to 97th in Off. F/+). When Frank Spaziani was fired, he came back to Las Cruces to fix an offense that had sunk right back to 118th in 2012; a week later, he was named interim head coach when Walker unexpectedly left for Jacksonville. A week after that, he was named permanent head coach.

Martin is saying all the right things and doing everything he can to breathe life into a lifeless program. He brings with him an experienced offensive coordinator in Gregg Brandon (Urban Meyer's former right-hand man at Bowling Green, a former BGSU head coach, and a former offensive coordinator at both Virginia and Wyoming) and a change to an attacking 3-4 defense. He has fought the hard fight before, and perhaps most importantly, he wants the job. These are good things.

Okay, it takes some stretching to fit anything regarding the 2012 season into the positives department. But we'll try. Losing wears you down at times, and by the time November rolled around, a 1-7 NMSU squad had lost hope. The Aggies were outscored by a 205-56 margin and lost the last ever WAC game by 38 points to an FBS newcomer, Texas State. But before hopelessness set in, this rather young team was making strides, at least on the defensive end.

The Aggies' best performance of the season, by far, came in a 28-14 loss to Louisiana Tech. Granted, the score was 28-0 midway through the fourth quarter, but the defense showed a decent spine in stopping Tech without points in nine of 13 possessions. Unfortunately, any improvement ended there. 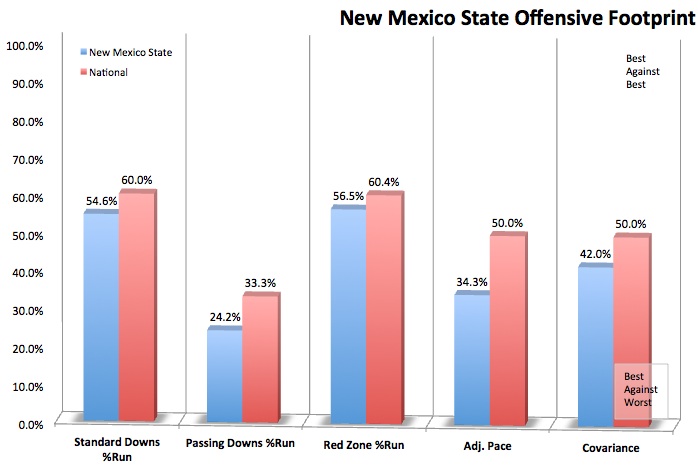 At this point, we really don't know what to expect from the quarterback position in 2013. Martin and Brandon decided that to give NMSU the best chance of succeeding, they needed to install a system friendly to a more mobile quarterback, with read options and moving pockets. That fits junior Travaughn Colwell's style quite comfortably -- Colwell was used as a change-of-pace last year, attempting 30 runs to just 13 passes (he attempted 78 runs to 60 passes in 2011 with Martin as offensive coordinator) -- but it left rather immobile starter Andrew Manley out in the cold a bit. Manley announced his transfer this week. So now it's either Colwell or Andrew McDonald, unless a newcomer like wonderfully-named freshman King Davis III can make some noise this summer.

Whoever wins the job will inherit a skill position unit that is questionable in terms of depth but has some nice talent at the top. Of the four running backs who averaged at least one carry per game, Germi Morrison was easily the most successful and explosive. His 4.7 highlight yards per carry suggest a guy who can do decent things in the open field, and while I don't want to overstate his talent, he's got at least a little bit of it. Throw in junior Brandon Betancourt, who had a lovely spring, and a couple of potentially interesting freshmen, and NMSU should at the very least have a running game that is a bit more efficient than last year's.

5. Austin Franklin is better than decent

The No. 2 and No. 3 receivers in NMSU's 2012 receiving corps combined for a 51 percent catch rate and average just 6.6 yards per target. On passing downs, he was basically the No. 1 and No. 2 target. But even in an awful passing attack, Austin Franklin made noise. He averaged nearly 17 yards per catch and a solid 9.0 yards per target despite plenty of attention from opposing defenses and minimal talent around him. Franklin showed flashes of brilliance as a freshman in 2011, averaging 10.7 yards per target and catching 34 balls; but he raised his game like nobody else on the roster did in 2012. Assuming he passes academic muster -- not a guarantee, since he was held out of spring practice for academic deficiencies -- he will give Martin and Brandon an offensive star.

Junior Jerrel Brown also showed flashes in 2012 and could become a strong No. 2 ... assuming Franklin is around to be the No. 1.

6. The line is big and experienced

Eight of nine players from last season's two-deep return, including second-team all-conference tackle Davonte Wallace and four other players with starting experience. In all, NMSU returns 79 career starts, and the eight primary returnees average 6'3, 300 pounds. It struggled to create opportunities for its backs, but it was decent in terms of both converting in short yardage and preventing negative plays. This isn't the most amazing line in the world, especially in pass protection (let's just say that getting the quarterback out of the pocket might be a pretty darn good idea), but it is far from the biggest worry on this squad. 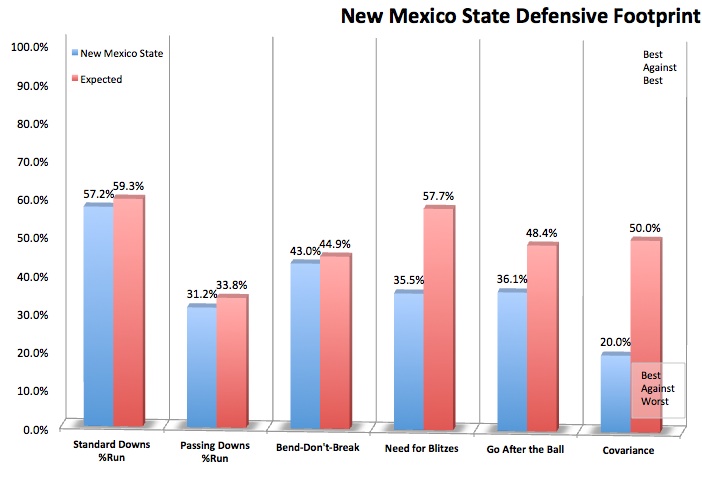 Thanks in part to a shipment of transfers, this NMSU defense might have more athletic potential than any Aggie defense in a while. NMSU wasn't awful on standard downs (and completely fell apart on passing downs) and stiffened nicely in the red zone, but the ceiling just wasn't very high overall.

That could change at least a bit with the addition of players like sixth-year Arizona end Willie Mobley, Michigan State tackle (and Las Cruces product) Matt Ramondo, New Mexico linebacker Zach Daugherty, Washington linebacker Kalei Auelua, and UCLA receiver-turned-corner Randell Carroll. Throw in a couple of junior college transfers and a three-star freshman linebacker, as well, and you've got a team that is quite a bit deeper than last year's. There is quite obviously no guarantee of success here, especially with a switch to a 3-4, but in terms of potential and hope, NMSU has more in 2013 than it did in 2012.

When NMSU moves to the Sun Belt in 2014, it will do so with a defense that will look completely different than it will have in 2013. Why? Because holy moly, look at all the seniors. Two of the incoming transfers are seniors, and the defense was a focal point of a 2012 Walker recruiting class that featured 11 junior college transfers.

The result: the top four returnees in the secondary are seniors, as are the top two returning linebackers and four of the top five returning linemen. The downside of loading up on JUCOs is that they don't stay long, and you'll have to load up on more in a couple of years. But let's worry about the future in the future. Right now, we see a rather absurdly experienced defense ready to take the field. That's quite often a good thing.

Again, it's a stretch here to turn the NMSU special teams unit into a positive, especially considering it must replace its main bright spot, kick returner Akeelie Mustafa. NMSU derived less of an advantage from special teams than any FBS team, with the worst place-kicking and punt returning in the country. But hey, you can't get worse than the worst. Decent punter Cayle Chapman-Brown returns, and any conceivable improvement from this unit would be welcomed.

New Mexico State is going to be better in 2013.

Don't ask me how much better, because I don't know. NMSU only once ranked better than 119th in the F/+ rankings during Walker's tenure (109th and 4-9 with an experienced squad in 2011) and played worse than three of four FBS newcomers in 2012. So "improvement" could mean making a run at bowl eligibility with wins over teams like UTEP, Abilene Christian, FAU, and Idaho (and hey, maybe an upset of visiting Minnesota or Boston College); or it could simply mean 2-10 and 120th.

I like the Doug Martin hire, and while it didn't make a lot of sense (geographically, anyway) for the Sun Belt to bring NMSU and Idaho aboard, my guilty liberal tendencies made me feel pretty happy about it. We don't know that the future will be any brighter than the past for this struggling football program, but we know that there is a future, and we know that the Aggies have a coach that wants to be their coach. That's something.