Share All sharing options for: Bret Bielema's Kitchen: An analysis

Late Wednesday evening, newly-minted Arkansas head coach Bret Bielema -- already prone to engaging in interesting conversation on Twitter -- tweeted out a picture of his dog in the family's new kitchen:

She is mad because I'm working on summer calendar and Jen is unpacking boxes. She really is spoiled so bad. #WPS twitter.com/BretBielema/st…

I'm going to ignore for a second Bielema's "spoiled" dog, which is clearly his wife's. No man who grew up on a hog farm and played defensive end for Hayden Fry would have a nine-pound dog with its own bathrobe, and I'm not going to join the chorus of people questioning his choice of canine companion.

But what is going on with Bielema's kitchen? He has two sinks on separate islands, both facing the same direction so that he can't even get a "double sink" thing going when he's making stew or whatever. On the opposite wall, there appears to be a third counter with bar stools (there are bar stools at the dog's island, as well, because bar stools in different locations facing the same direction on the same line are conducive to chatter while hosting parties), and another small wall next to it with a fourth counter for collecting mail. I attempted to draw the kitchen floor plan, including all the things that Bielema would typically require for a kitchen that are not included in the shot: 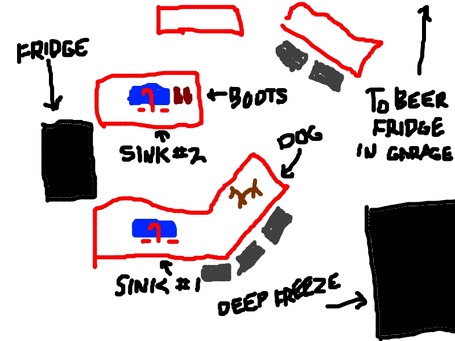 There simply isn't enough room for a microwave, a giant side-by-side fridge and a deep freeze full of venison in that kitchen full of islands, and we all know that the garage is too full of beer fridges and ATVs to hold the deep freeze, too.

There is only one explanation for this: Bielema is currently homeless and living in the kitchen countertop display section at a Fayetteville Lowe's. There is no other place where the rules of efficient kitchen design and sink conservation are so blatantly ignored. I hope you find a home soon, Bret. That dog definitely needs a place to relax.