Dana Holgorsen always fields a strong offense, and West Virginia always goes bowling ... right? In 2013, Holgorsen faces the biggest challenge of his career, replacing some superior offensive talent and attempting to patch holes in a defense that might not have been as awful as you think, but still wasn't good enough. For more 'Eers, visit West Virginia site The Smoking Musket.

1. A blip and a downward trend

In my Auburn preview a few weeks ago, I mentioned that the Tigers were basically on a sustained downward trend, with one crazy blip in 2010. Granted, West Virginia's 2010 blip was not as strong, but the Mountaineers have basically taken part in the same effect.

Now, describing anything that happened during WVU's 2012 season as part of a "trend" feels a bit strange. A spectacular, ridiculous Orange Bowl performance at the end of the 2011 season resulted in serious WVU-as-darkhorse-title-contender talk in the offseason (despite the fact that the Mountaineers were mediocre in November 2011 and barely finished in the F/+ Top 20). And about a month into the season, it looked like WVU might live up to the hype despite not playing any defense whatsoever. The Mountaineers allowed 108 points in two weeks to Baylor and Texas, won both games anyway, and reached fifth in the polls.

Then they misplaced their offense, lost five in a row, and threatened to miss a bowl game altogether.

And then, at the end of the tailspin, they moved Tavon Austin to running back, began posting silly yardage numbers again, improved slightly on defense, and finished 7-5. (And then they looked like they had never seen snow before in losing to Syracuse in the Pinstripe Bowl.)

There was nothing normal about WVU's 2012 campaign, but it finished with the Mountaineers in a lower place than they had been in a while. They hadn't won fewer than eight games in a season since 2001, and now they have to replace almost every player you can name from last year's squad. The 2013 season should see defensive improvement and a significant test of head coach Dana Holgorsen's plug-and-play offensive system. And if they're not careful, the Mountaineers could finish 2013 having regressed again for the fifth time in six years.

2. It wasn't as bad as you remember it (really)

But here's where advanced stats can come in handy. When you adjust for pace (absurd in the Big 12) and quality of offense (equally absurd), WVU's numbers weren't good, but they were slightly more acceptable. You're simply going to give up yards and points in the Big 12, and when you play at a ridiculous pace, your defense is going to be on the field for a lot of plays.

Taking that into account, WVU's defense was only bad for about a month and only truly awful for two games. But wow, those two games.

Averaging 52.0 points per game after five games, with quarterback Geno Smith all but locking up the Heisman by the end of September, WVU was outscored, 106-28, in eight quarters versus Texas Tech and Kansas State. The rebound began at that point, but with a tough stretch and some late-game faltering versus TCU, the Mountaineers lost three more games before they could rally. But the collapse itself was both brief and incredible.

And it led to Holgorsen shaking things up a bit. Last year's linebackers coach, Keith Patterson, is now the defensive coordinator, while last year's coordinator, Joe DeForest, is now co-coordinator and associate head coach. Patterson has shifted things in favor of more of a straight 3-4(ish) instead of a 3-3-5. 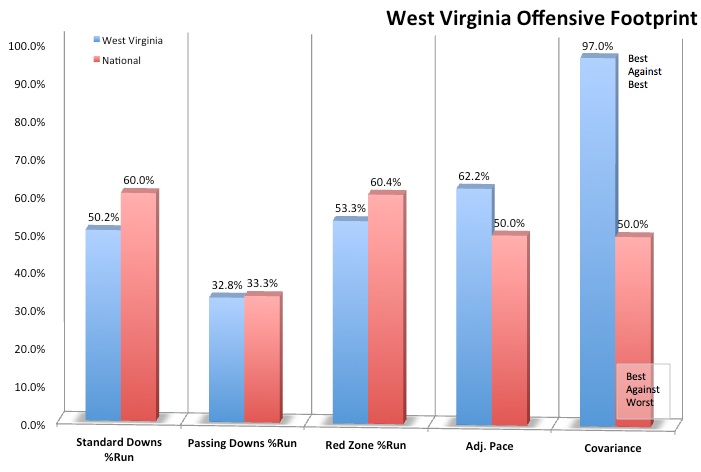 Dana Holgorsen has been either a solo offensive coordinator or a head coach for six seasons. He spent 2007 at Texas Tech (after seven seasons there as either receivers coach, co-coordinator, or both), 2008 and 2009 at Houston, 2010 at Oklahoma State, and came to Morgantown in 2011. In terms of Off. F/+, his offenses have ranked seventh, 15th, second, 15th, 10th, and 15th, respectively, in Off. F/+. He is, by any definition, a good offensive coach.

That's something to keep in mind heading into 2013, because in the last two years, individual talent on the field has almost overshadowed the man pulling the strings. Quarterback Geno Smith and receivers Tavon Austin and Stedman Bailey were incredible individual talents who posted absurd numbers under Holgorsen.

That's ridiculous. And it's easy to assume that in losing them, WVU has no choice but to take a step backwards this coming season. But Holgorsen offenses produce at a top-15 level no matter who is on the field ... right? West Virginia's going to move the ball even despite a new quarterback, an almost entirely new receiving corps, and a sketchy offensive line ... right?

Holgorsen faces quite a test of his offensive ingenuity this year, perhaps his biggest recent test, in fact. He might pass that test with flying colors, but it's going to be a hell of a challenge.

We don't know whether a Holgorsen offense will rank in the Off. F/+ top 15 for the seventh straight year, but we do know that WVU is still going to pass a lot. And whoever wins the quarterback job -- Florida State transfer Clint Trickett? Last year's backup, Paul Millard? Redshirt freshman Ford Childress? Other? -- is going to be throwing passes to rather green receivers.

The top five returning receivers combined for 59 targets last year, barely half as many as No. 3 target J.D. Woods saw. But at least a couple of guys are likely to see 100-plus targets. Who will they be?

Sophomore Jordan Thompson owned the spring game, but a good number of passes will go toward players who have yet to actually suit up for WVU. Holgorsen signed three junior college transfers and a star freshman in Shelton Gibson. Developing a rapport between a new quarterback (if Trickett wins the job) and brand new receivers will be tricky but vital. WVU should be able to lean on the run a bit with the return of Andrew Buie and a healthy Dustin Garrison, but come on -- WVU's going to pass, too. How good will they look in doing it? 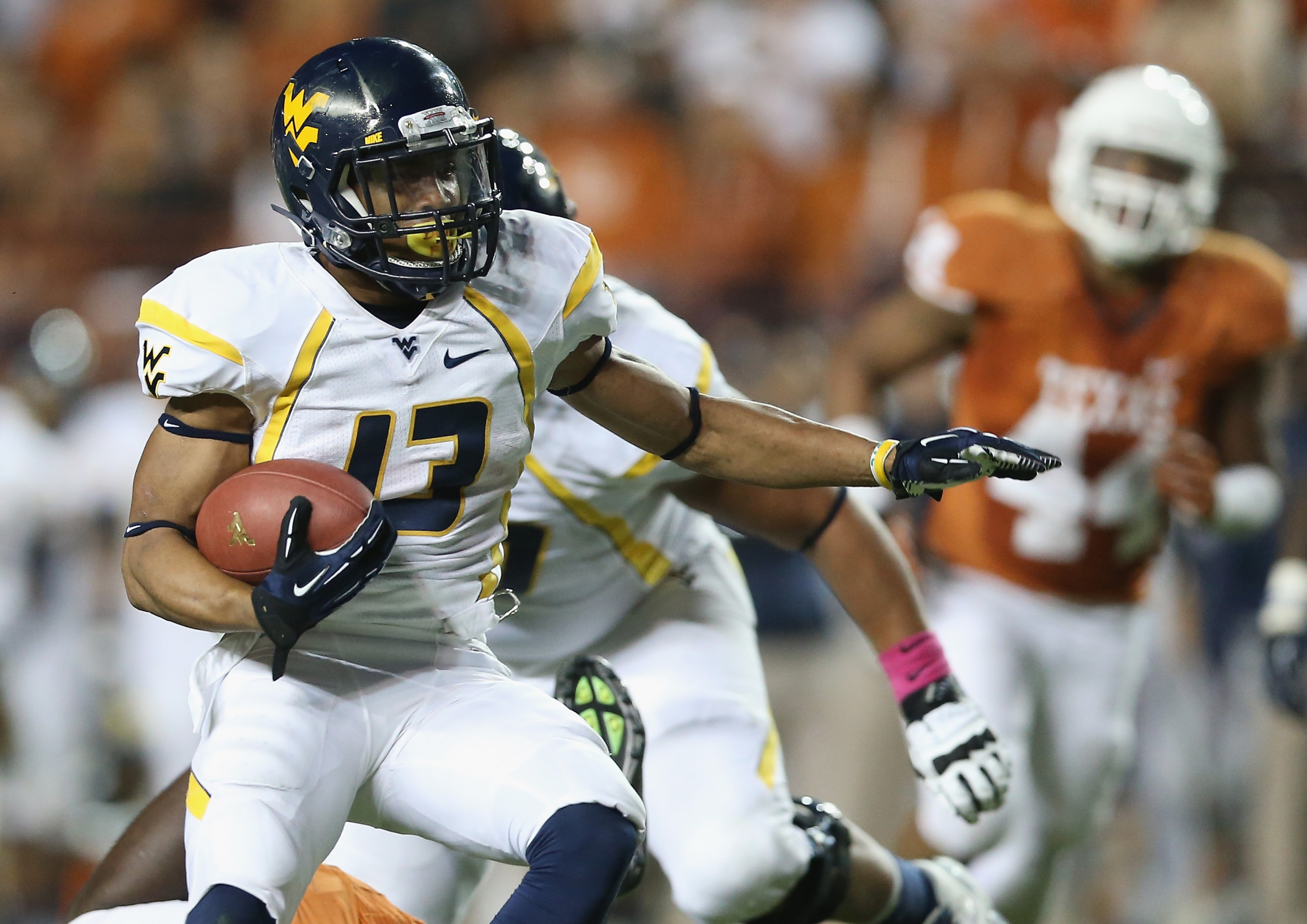 5. A bad line wrecks everything

WVU's offensive line was terribly hit-or-miss in 2012, opening up holes for Buie, Austin, etc., but also allowing defenders into the backfield with frequency. And while the line's sack rates were pretty good, well, they better be good when you're throwing one-third of your passes behind the line of scrimmage.

And now it must replace three starters who combined for 126 career starts. There is some experience here, but the depth is questionable at best. And the last thing you need when you've got a green passing game is a line with holes.

(That's the last thing you need when you've got an impeccable passing game, too, of course.) 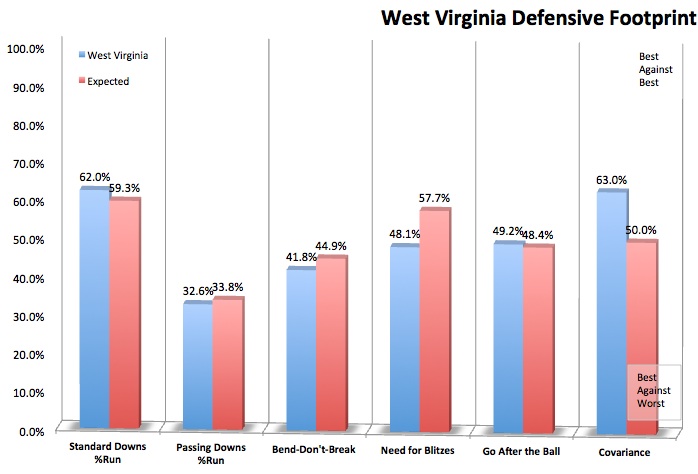 6. Legitimately decent versus the run

For all of WVU's struggles in 2012, defending the ground game really wasn't one of them, at least not until the bowl game (Syracuse rushed for 369 yards). Only once in the regular season did an opponent compile more than 188 rushing yards, and that was only partially because the passing lanes were so inviting. WVU's line was legitimately solid up front, preventing opportunities at a high rate. The Mountaineers struggled in short-yardage situations, but the big line showed some promise. That promise should increase with the return of six of last year's top seven.

The problem, however, might come at linebacker. The linemen in WVU's 3-4(ish) look aren't called upon to make that many plays, only occupy blockers; and the team's biggest playmakers against the run, linebackers Terence Garvin and Josh Francis are both gone. That leaves Isaiah Bruce, Doug Rigg, and Shaq Petteway as the most proven players and opens the door for a couple of junior college transfers, and perhaps a star freshman or two, to earn some playing time.

WVU's pass rush wasn't horrendous last year, but it was mediocre at best, and that was with Garvin and Francis, who combined for 10.5 sacks. The rest of the team combined for just 12.5, and the leading pass rushers, end Will Clarke and Petteway, had 1.5 each.

Both incoming JUCOs, Brandon Golson and d'Vante Henry, will be given every opportunity to thrive in this regard; you hate relying on newcomers, but WVU might not have much of a choice. Converted end Dozie Ezemma apparently has some potential, but WVU's front seven has proven very little when it comes to pressuring the QB.

An improved pass rush (or at least, one that doesn't regress) could do favors for a secondary that hit pretty hard but lacked cover guys. As decent as the run defense may have been, the pass defense suffered dramatically. Three opponents -- Baylor, Texas Tech, and Oklahoma -- passed for at least 500 yards (the ridiculous combined line in the three games: 100-for-141 for 1,643 yards, 17 TDs, 3 INTs; Florida State allowed only 2,266 passing yards in 14 games, by the way).

While returning safeties Karl Joseph and Darwin Cook were active and aggressive, corners combined to defense only 16 passes, and nine of those came from since-departed Pat Miller. Sophomore Nana Kyeremeh showed some potential in minimal action and finished spring first on the depth chart. He and other youngsters could certainly improve just from the benefit of experience, but WVU's corners could improve and still be pretty average overall.

9. You had Tavon Austin, and special teams was a weakness?

Losing Austin hurts a lot, but let's just say that losing the other major names in this special teams unit might not be a bad thing. Tyler Bitancurt really wasn't that bad -- a vast majority of his field goal misses were on long kicks, and he probably deserved better kick and punt coverage than he got. But he was replaceable.

Once again, the narrative in late-September and the narrative in early-November could be quite different. The schedule is built for early success despite the September 7 trip to Oklahoma; even if some of the new pieces are struggling to gel a bit, WVU should expect to be around 3-1 when Oklahoma State comes to town. But the six games that follow will determine the Mountaineers' fate, and it is difficult to figure out how equipped WVU will be to handle this stretch.

Dana Holgorsen is proof of what I said about Texas Tech's Kliff Kingsbury on Thursday: being an offensive whiz kid does not automatically result in success as a head coach. Holgorsen's squad was the victim of some false hype last year -- it shouldn't have been hyped quite as much as it was in the offseason -- and that added to the feelings of disappointment with how the 2012 season played out. But still, WVU's defense has regressed dramatically in the two years since Holgo took over, and while he's trying desperately to shuffle pieces around and fix the holes, there's no guarantee that his moves will work.

When you run a high-pace, high-octane offense in the Big 12, your defense is going to allow points and yards. That's just the way it is -- ask Baylor's Art Briles. But WVU simply couldn't defend the pass well enough to succeed in 2012, and to improve on that in 2013, the Mountaineers will have to take advantage of experience in the secondary and hope that the pass rush doesn't regress dramatically. And even if the defense does improve -- I figure it will overall, at least a little bit -- it has to improve enough to offset potential regression on an offense that still has Holgorsen but is otherwise almost completely lacking in proven quantities.

Beat William & Mary, Georgia State, Maryland, Kansas, Iowa State, and somebody else, and WVU can at least continue a nice bowl streak (11 years and counting) while figuring out how to move forward with Holgorsen and this new cast of characters. That doesn't seem like too much to ask, though avoiding regression for the fifth time in six years might.