What can we learn from Nebraska, the last team to own the SEC?

Share All sharing options for: What can we learn from Nebraska, the last team to own the SEC?

There was a time, a time before Gary Danielson trolling fans with IQs over 80. When a team of farm boys from the Great Plains reigned supreme. When people believed in the Power I.

This was an age when the quarterback could only get the ball from the center in a properly intimate way. And in college football, one team was more man then the rest. That team was the Nebraska Cornhuskers.

They were like a Greek deity, an angry, muscular deity walking amongst mere mortals. They had a style that could make a half-bear, half-cat from Rocky Top purr and helmets so plain they made Paterno look stylish. In other words, Tom Osborne was the balls.

For better or worse, we are college football fans in an era in which SEC teams create unbeatable teams by using their advantages in proximity to high school players who can practice year-round and fans who make death threats when the rival coach is invited to town. However, there was a time when one team owned the SEC. Over a 24-year period book-ended by a 1978 loss to Alabama in Birmingham and a 2002 loss to Ole Miss in Shreveport, Nebraska went 9-0 against SEC opponents. Included in this run were three major bowl wins over LSU – two of which were in the Tigers’ backyard of New Orleans – and three more major bowl wins over Tennessee and Florida in the late '90s, all by huge margins and all at a time when Steve Spurrier and Phillip Fulmer were at their apexes.

At a time in which the SEC is dominant on a national stage, it's worth considering what we can learn from Nebraska’s epic run against SEC opponents.

(Insert standard caveat here about the fact that we are talking about a small sample size. Nine games over two decades or 17 over three aren't exactly going to survive a statistician’s test for significance. In this sample, it doesn’t hurt that three of the four best teams of the Bob Devaney-Tom Osborne era – 1971, 1995, and 1997 – played SEC champions in their bowl games.)

No state was quite organized around the principle of fealty to the local program the way that Nebraska was for its Huskers.

As an initial matter, Nebraska’s ability to put top teams on the field is interesting because the Huskers faced talent disparities similar to what many other teams face against the SEC today. Although population shifts and the end of Jim Crow have enhanced the SEC’s advantages in terms of proximity to blue-chip talent, it’s not as if the Great Plains were a more fertile recruiting area than the Southeast in the 1970s, '80s, and '90s. It would be one thing if USC or Texas were dominating the SEC; it’s another for a program not in the vicinity of a great recruiting area to put together teams that could whip the elite of the SEC on a regular basis.

So what allowed Nebraska to overcome its geographic destiny? A few factors come to mind: 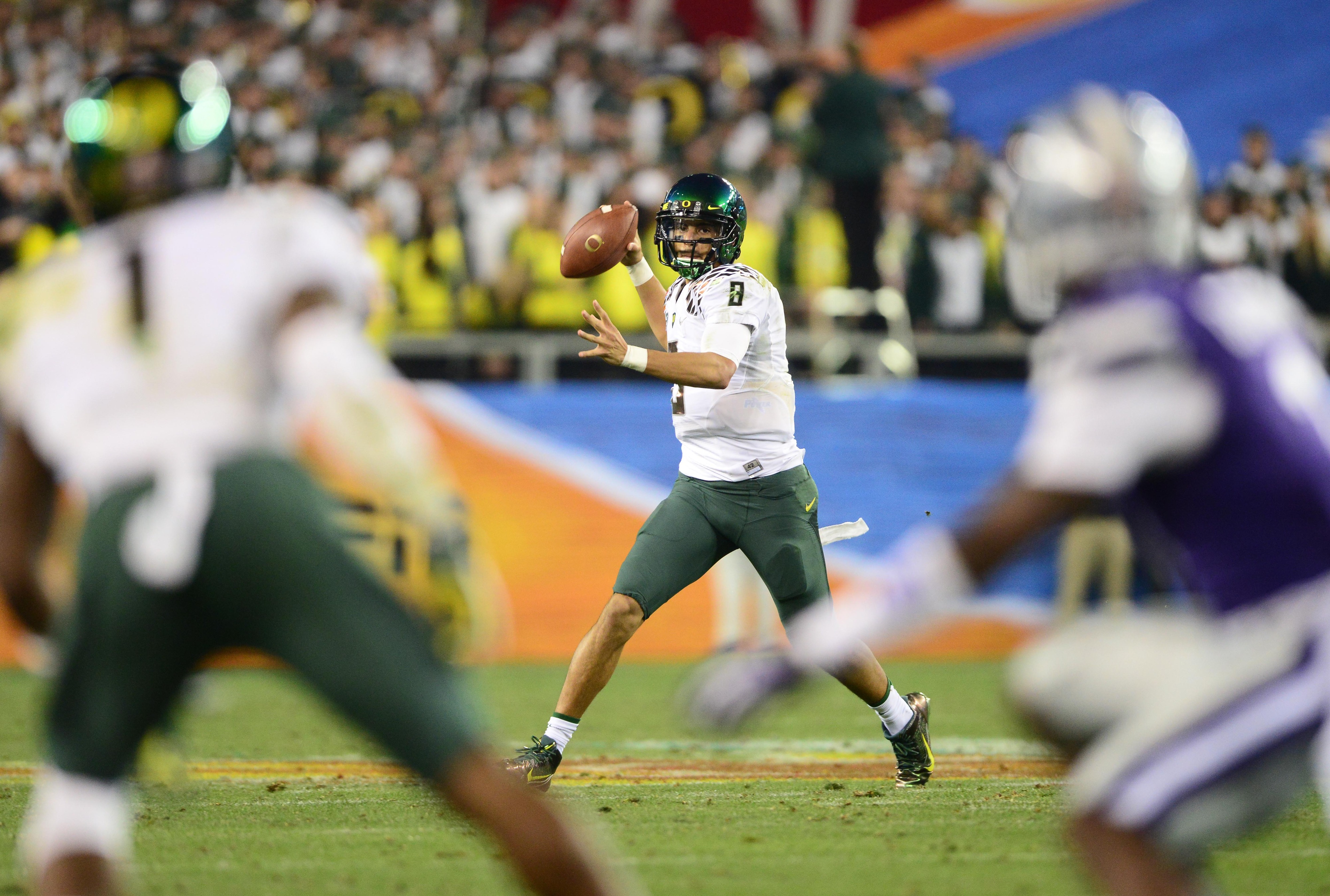 So take a program like Oregon, which seems to be the closest modern analog to Nebraska (right down to the former Nebraska quarterback as its current offensive coordinator). The Ducks have continuity in that they have not hired from the outside in decades, although that continuity was broken a little by Chip Kelly getting lured away by the NFL.* Oregon has a unique offensive style, one that does not require superior athletes, just like Nebraska did. (That said, any offense looks better when it has Johnny Rodgers or De’Anthony Thomas.) The Ducks don’t have the walk-on program or the state-wide obsession the way that Nebraska did, but they do have Phil Knight’s lucre, which is an advantage in its own special way.

* - The advent of read-option-heavy offenses in the NFL represents a double-edged sword for a program like Oregon. On the one hand, it removes a recruiting obstacle. On the other hand, it makes their coaches more attractive to lucrative offers from a wealthy professional league.

What Oregon does not have is an advantage in physical development. The Ducks had two cracks at elite SEC teams under Chip Kelly, both times at neutral sites. Against Auburn in 2010 and then LSU in 2011, Southern athletic superiority prevailed over Oregon’s clever scheme. Oregon averaged 23 points per game in those two contests, and that number is inflated by a meaningless touchdown in the closing seconds against LSU. The Ducks had the right system, but they did not have the dominant offensive line. They didn’t have the third leg of the stool: the edge in developing mauling, moving linemen.

In other words, the Little Engine That Could team that we are imagining would combine Oregon’s offense with Stanford’s offensive line talent.

Some other thoughts on the Nebraska example:

A common criticism of Paul Johnson's offense at Georgia Tech is that opposing defenses can shut it down when they have time to prepare. That was not the case for Nebraska. Florida and Tennessee had weeks to prepare for the Huskers’ option, and it rolled over all of them. With the right coach and right personnel, that offense does just fine in a bowl game.

And the Kirk Herbstreit claim in 2001 that defenses were too athletic for the option to work anymore? Nebraska was all of two years removed from crushing a Tennessee defense that was loaded with NFL talent. Nebraska did not need to move away from what it was doing. It just needed to do it better.

While SEC teams struggled against Nebraska, Miami and Florida State did just fine. From 1983 to 2001, Nebraska went 1-4 against Miami and 1-5 against Florida State. It’s not that teams with great athletes could not figure out how to defend the Nebraska offense; it’s that SEC teams couldn’t do it. Perhaps this is a reflection of the fact that SEC teams weren’t as well-coached in the '80s and '90s as they are today?

That said, the option can still make good defensive coordinators look bad. Take three of the more highly-regarded defensive coordinators in college football. Bob Diaco had a great year at Notre Dame last year, but he is only two years removed from Navy fans being befuddled by Notre Dame’s naiveté in defending their offense. Greg Mattison is an outstanding defensive mind, but he had major issues trying to defend Air Force's option in 2012. And Air Force gave John Chavis fits when the Falcons played at Neyland Stadium in 2006.

With that context, it’s no surprise that Nick Saban’s voice trailed off when he talked about a team bringing the Wishbone back. The question is whether a team could run an old-school option offense and still recruit at a championship level. To come back to the Johnson question, Georgia Tech isn’t setting the world on fire on the recruiting trail, but is that because of the offense or the head coach’s personality and priorities?

If Nebraska went back to its roots, would it be unable to bring in talent to compete with Michigan and Ohio State in the Big Ten? Right now, the Huskers are struggling to find a new recruiting base to replace what they had in the Big XII, namely Texas and Kansas. Those struggles can lead to two divergent conclusions.

One would be that a program that is already having recruiting issues does not need to make matters worse by implementing an offense that recruits could see as a relic. The second would be that if Nebraska is already going to be operating at a talent deficit compared to the Buckeyes and Wolverines, then the Huskers need to pull a page from their old playbook (quite literally in a certain respect) and employ a system that makes up for the program's deficiency of blue-chip recruits.

• Watch NFL rookies interviewing each other