It's okay, Johnny Manziel: All college towns are bulls---

Another chapter in overanalyzing the social media utterances of a college football player.

Share All sharing options for: It's okay, Johnny Manziel: All college towns are bulls---

Publicly fretting over Johnny Manziel is its own sport at this point. Here's a really bad instance of it, though: openly worrying about Johnny Manziel wanting to leave a college town -- even if it is College Station, the place where he became the most recognizable player in college football. 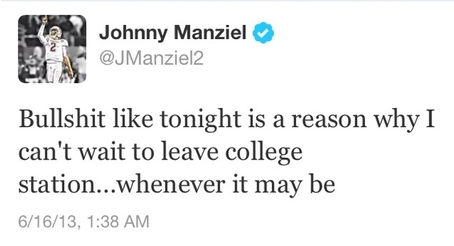 College towns -- memories of happy memories and not having more than five bills aside -- are designed as opportunistic money sucks hooked directly to the universities that host them. Alternately, the universities are giant parasites living happily off the hardworking small towns that tolerate them.

I never want to see this place again.

It's one of those two, definitely, depending on your interpretation or interests or perspective. The commonality is this, though: everyone runs at a low simmer of dislike for the other, particularly when the town or school really enjoys ticketing the crap out of students for a nice, steady stream of revenue.

I remember leaving beautiful Gainesville, Fla. -- a place where you can live in reasonable comfort on three dollars a day and a smidgen of insane hope -- and thinking I never want to see this place again. That was me, with an English degree, no discernible work or social skills and no hope for anything like being able to feed himself with money earned from a job. That's just what people want to do at 20. They want to be somewhere else and usually it's in a careless, haphazard hurry.

Manziel's a talented athlete with ample connections, fame and at least a shot at a professional football career. He has to feel, then, probably 10 times the standard impatience of living in College Station where he can be reminded of where he stands in the tiny, petty bureaucracy of a small college-town daily: at the bottom, probably paying a premium on something simply for the location (Try getting a hotel room in a smallish college town on a gameday weekend and taste the pain yourself).

It may be a quaint memory for someone years out of college, stuck firmly in the "This Is Water" stage of adult life, but it's your first taste of that frustration in one degree or another ... and it sucks deeply. One has to pay their tickets and their bills and then they must do it all again -- oftentimes doing so on the butt end of what is no more than legalized graft (or at best a dull business that'll be dead or obsolete in 10 years). There are mediocre things and people and businesses and corporations and places everywhere, so many that you won't even bother to learn the names after a while.

All that, and so much more, is total bullshit. You've got to do it anyway. College Station, or any other college town, is just the first place most college students learn that.

Did I even mention that Manziel is just 20 years old and was born in 1992? That he doesn't see a dime from all of those shirts with his number on them? Because there is that as frustration, too, but that is a whole other discussion re: college towns and the bullshit surrounding them.

• What can the Nebraska dynasty teach us about the SEC?