Does 2013 have a Robert Griffin III? The never-won-a-Heisman Heisman watch list

Has your school never won a Heisman? Well, if not, there's always reason to dream.

A Heisman Trophy is a piece of bronze about 13.5 inches tall and 25 pounds heavy. It cements its winner forever as a college football great. But it also means a lot for the program of the player that wins it. It's much more than just proof one dude who played there had a great season.

Think about Baylor. Baylor is not a college football powerhouse. It has long played in a stadium that seats 50,000, just the eighth-largest in the Big 12, and still put a tarp over 5,000 seats. It did not appear in a bowl game from 1994 (when it tied for its third Big 12 title since 1925) until 2010, Robert Griffin III's first year as a starter.

In Griffin's second season as a starter, he won a Heisman. Baylor itself wasn't championship material that year -- it finished No. 13 in the AP Poll after an Alamo Bowl win. And yet there's been a sea change in Baylor football.

It's building this mecha stadium on the banks of the Brazos, costing $250 million. Nike went out of its way to hype up Baylor's new uniforms in a way it normally only does for more prominent schools. Guys are coming out of the woodwork to donate $35 million to Baylor football. And as of right now, the team has 14 committed recruits and is ranked No. 15 in 247's composite rankings.

Baylor football will contend for a while now, for multiple reasons. (If you don't believe that, read Spencer Hall's interview with head coach Art Briles.) And you can trace several of them to one player.

Let's look at some schools that have never had Heisman winners, but still have 2013 contenders.

Why he could win: Even if he doesn't want a Heisman campaign, he's likely to be in consideration for the trophy. He's a crazy accurate quarterback with legs on a strong team in a bad conference. Bridgewater's statistics this year will likely be video game-esque.

What happens if he wins: Maker's Mark branches out from Rick Pitino-themed bottles to Bridgewater-themed bottles, rendering Bridgewater ineligible for his senior season. Having already spent millions on naming the school's basketball and football facilities, KFC and Papa John's get into a bidding war to actually rename the University of Louisville. $1.7 billion later, we have the "KFC Yum! presents Teddy Bridgewater University."

Note: Bridgewater has already turned down Louisville's attempt to craft a Heisman campaign around him.

Why he could win: Let's start with some video that should explain everything: 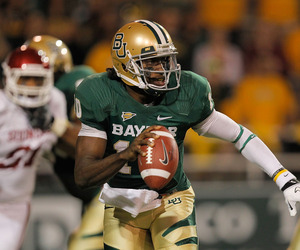 Thomas has never taken the lion's share of carries at Oregon, but has shown his potential in a major way. First, he managed better than 10 yards per carry as a third-stringer behind LaMichael James and Kenjon Barner. Then last year, the explosion continued, as he managed 7.6 yards per carry behind Kenjon Barner. Now James and Barner are both in the NFL, and Thomas actually gets a chance to be the featured back.

What happens if he wins: Nike releases a new, sleeker version of the Heisman made of solid turquoise with iridescent neon acting as its uniform. Bitter at having lost out on Donald Duck revenue from Oregon's mascot, Disney teams up with Oregon on "Puddles and DAT." A donor gives Oregon seven-foot-tall playcalling tablets.

Why he can win: The rise of Tajh was his sophomore campaign, but he improved in his second season as a starter. Now a senior, Boyd looks to lead Dabo Swinney's squad to an ACC title Boyd is the rock of Clemson's top-10 offense, throwing for 36 touchdowns in 2012 with a 67.2 percent completion percentage while also leading the team in rushing touchdowns with 10.

What happens if he wins: Clemson raises enough money for a brand new, state-of-the-art practice facility and major renovations on Memorial Stadium, but the cash disappears overnight in the largest heist in South Carolina history. The culprit is never found. In 2019, an anthropomorphic tiger known to his band of heavily armed rebels only as "El Tigre" overthrows the Colombian government, where he rules with an iron fist. Although the US sends CIA operatives to take out the narcoterrorist syndicate, they fail, simply deciding to join him in watching the 2022 ACC Championship between UConn and Appalachian State on his 144-inch television.

Why he can win: Carey was maybe the best running back in college football last year -- 1,929 yards and consensus All-American nods. Rich Rodriguez's team averaged 38.2 points per game, and with quarterback Matt Scott gone, he'll have to bank even more heavily on Carey.

Why he can win: Diggs' freshman campaign showed why he was a five-star recruit. Even with Maryland's quarterback situation collapsing into a pile of torn ACLs and leaving the Terps with a converted true freshman linebacker playing at quarterback (NOTE: THIS ACTUALLY HAPPENED IN REAL LIFE), Diggs managed 848 yards and six touchdowns. There's no way those numbers drop with an actual quarterback playing quarterback, and the Terps will have one in sixth-year senior C.J. Brown. SB Nation's Testudo Times has written about why Diggs could win.

What happens if he wins: Maryland fans finally put basketball and lax in the rear view mirror to focus on the gridiron as the team enters the Big Ten. The 13 schools in the conference now include Maryland in its secret meetings about booting Rutgers. With improved post-Rutgers fan support and a higher share of conference revenue, Maryland builds an indoor stadium with a huge Maryland flag painted on the dome by Under Armour.

Why he can win: Lynch actually got a few Heisman votes last year, finishing eighth. And for good reason: dude finished fourth in the nation in running yards while playing quarterback breaking Denard Robinson's record for rushing yardage as a QB. He got the Huskies a 12-2 season with a BCS bowl berth. If NIU is once again a power in the college football junky's favorite conference, Lynch will once again deserve national hype.

What happens if he wins: With a Heisman winner and -- in this scenario -- two BCS appearances, NIU is officially a BCS buster, even if the BCS doesn't exist anymore. The Huskies accept a bid to the ex-Big East, and after winning their first three AAC championships, get a call-up to the ACC alongside Cincinnati. UConn decides to fold as a university.

And some longshots to know

Let's also look at some teams that are basically never in the Heisman conversation that still have players worth knowing about, as they could all have huge years.

Why he can win: This speedy lil bugger earned consensus All-American nods in 2012 as a return man, but that doesn't fully summarize what he can do. Lightning quick and shifty as all get out, Archer is genuinely a Golden Flash, capable of scoring as a runner, receiver, or on special teams, if the opponent is dumb enough to kick to him.

What happens if he wins: Seeing the potential after Archer's win, ESPN extends and increases its deal for #MACtion, leveling the economic playing field between the big boys and the mid-majors. With increased exposure, the MAC eventually rises to the level of a power conference. Long story short, the Akron Zips' kangaroo mascot Zippy runs across the field in the middle of the 2045 championship game and pummels Alabama's Big Al in one of the most brutal cross-continental mascot fights the world has ever seen.

Why he could win: Fales threw for 4,193 yards, and the Spartans only lost two games. Now they're in the MWC -- a conference people kinda respect! -- and the offense should keep rolling, even with Mike MacIntyre gone to Colorado. Fales is considered an early top 2014 draft pick.

What happens if he wins: SJSU is excited about becoming a legitimate contender in the Bay Area college football scene alongside Stanford and Cal. SJSU is quickly disappointed by how unglamorous it is.

Why he could win: The younger brother of David had quite a year in 2012, throwing for 4,104 yards as the Bulldogs won nine games. They'll fight with Boise State again for Mountain West supremacy, and Carr's hookup with Davante Adams -- who had over 100 catches and 1,300 yards as a freshman last year -- is why.

What happens if he wins: Gets drafted first overall, making Fresno State the weirdest school ever to have two No. 1 overall picks.

Why he could win: As a sophomore, Keeton was brilliant for Gary Andersen's squad, with 3,373 yards passing, 27 touchdowns against nine picks, and only two losses, against Wisconsin and BYU. He loses his coach and his running back so Keeton will have to carry the Aggies.

What happens if he wins: Sudden increase in Utah children named after characters from Rugrats.

Why he could win: Mark is basically Dri Archer, but with less gaudy stats and against Big Ten defenses. Northwestern managed 10 wins in 2012 thanks to the inability of opposing defenses to get a hand on the 5'8 speedster, who ran for 1,366 yards and 12 touchdowns.

What happens if he wins: Northwestern sells out a football game of its own accord in 2014. The school announces the program-defining moment in its monthly email to alumni as the fourth news item, behind some random crap about student engineers building a solar-powered car and medical students discovering some genome or something (not a joke: the news of a new basketball coach's hiring was EIGHTH in one of these emails behind the debate team finishing second and students designing booties for penguins with arthritis.) Considering the school is already building state-of-the-art practice facilities, the money from the influx of donations goes towards adding a wing to the library I never spent time at while I was in college, and I cry myself to sleep for six months straight.

Why he could win: Matthews gave going pro a thought after 1,323 receiving yards in 2012, but instead he'll be the key returning player from the most successful Vanderbilt team in about a million years. He'll have to establish a rapport with a new quarterback, but he's one of the few guys capable of slipping behind SEC defenses.

What happens if he wins: Rich gentlemen who used to attend Vanderbilt sign up to donate in droves. The school inks a lucrative athletic outfitting endorsement contract with Vineyard Vines, the company's first, and Vandy lands every WASPy recruit for the rest of eternity.

Why he could win: The quarterback is the guy everybody likes to talk about in the pistol, but its just as nifty for talented runners like Jefferson, as defenses don't have an early sign of which side a potential running play will go.

What happens if he wins: Nevada builds that crazy stadium UNLV was planning on building. Neither school is happy.