2013 College Football Belt predictions: Can the Big 12 hold the title all year?

How will the college football internet's most beloved unofficial championship change hands this season?

Share All sharing options for: 2013 College Football Belt predictions: Can the Big 12 hold the title all year?

College football, a sport long without a traditional postseason, has often inspired its fans to concoct championship scenarios of their own. One of these is the College Football Belt, a website that tracks a lineal championship beginning in 1972.

Only one team can hold the belt at a time. It's like boxing. A team can only win the belt by beating its current holder. Nebraska held it first, being awarded it retroactively for winning the 1971 national championship in the Top 25 polls.

It doesn't always go to the best team in the country, just to the team that's beaten the last team to hold it. Baylor currently has it, having taken it from Kansas State in 2012. You can find its full history here.

If the Bears start the season 4-0 (which is within reach, as their first four foes are Wofford, Buffalo, ULM, and West Virginia, all in Waco), they'll rank No. 11 in all-time belt game wins with 14, just ahead of Arizona and behind Nebraska. Baylor.

But that trip to wily and revenge-minded K-State, whose stadium Baylor coach Art Briles called the toughest in the conference, could mark the end of the Bears' reign. It would also mean the first back-and-forth belt exchange between two programs since USC took it from Washington in 1978 and gave it back in 1981. (USC tends to hold it for ages -- it leads in all-time belt wins, with 57, and in reigns, with 10.) 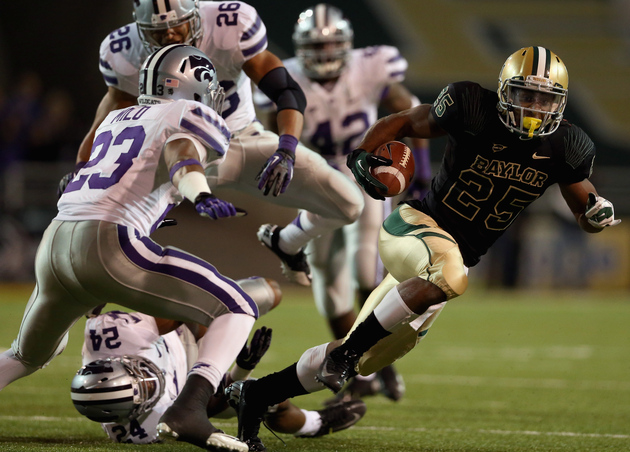 The Wildcats' likely two toughest games of the year, road trips to Texas and TCU, come right before their Baylor game. So Kansas State could hang onto the belt for a while, maybe even topping last year's three-week run, which was the program's first taste of the belt. Belts taste bad.

But do we think K-State's going 8-4 or better this regular season? If not, it'll have to lose at home at some point. And there's an offense rolling into town that could be finally clicking after replacing its passing battery and enduring a rough opening stretch.

The Mountaineers' only previous title reign came last year, spanning their Orange Bowl win over Clemson to their loss at Texas Tech. That's six games' worth of belt wins, good enough for No. 23 all time. I do not see a seventh win this go-round. 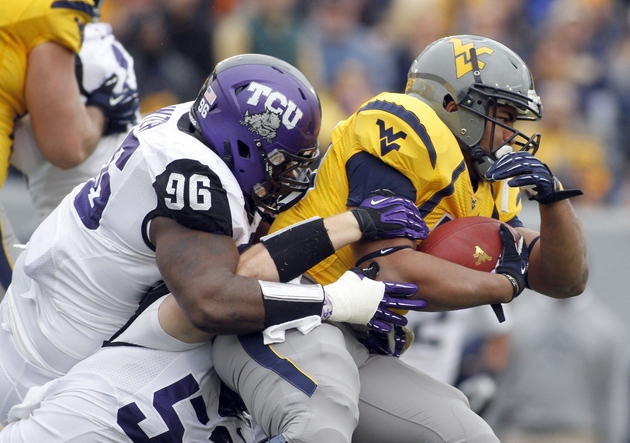 Not only should the Frogs be one of the three (or so) best teams in the Big 12, they've also showed they'll also get better as the season goes along, so long as attrition doesn't strike. They will have gotten LSU, Oklahoma, Oklahoma State, and Texas out of the way before dealing with this belt business, winning a couple of those and losing a couple. And Gary Patterson's defense fears no Air Raid.

TCU hasn't held the belt since 1991, when it won it from Rice (who'd taken it from Baylor) and gave it back to Baylor a week later. All things revolve around Baylor.

The Frogs will play those Bears to close the regular season, after a pair of title defenses against Iowa State and Kansas State. And TCU closes hot, winning its last four games to enter the postseason with the strap. TCU's jumped from No. 46 to No. 28 in belt wins, tying it at five with ... hey, Texas and Oklahoma.

At the moment, I have the Frogs and Texas A&M playing in the Cotton Bowl.

A million cases could be made for either team winning this one. TCU will have the more experienced coach and the better defense and the shoulder chip. A&M will have the more talented and tested roster and the best player in the building. We'll go with the Aggies to land their first belt reign since 1998, but not with extreme confidence.

The Big 12 surrenders the belt after 17 games (18 if we count WVU's win as a Big East team over Clemson) to a former Big 12 team. And since A&M is currently scheduled to open its 2014 season with Lamar, we do have at least one title defense arranged, which would boost the Aggies to No. 20 in all-time belt wins (eight).

How do you see the belt changing hands this year? Or, more simply, when's Baylor's first loss coming?