What if your NFL team sponsored a college football bowl game?

With the reported new Detroit Lions Bowl, let's look at what would happen if some other NFL teams got in the act.

Share All sharing options for: What if your NFL team sponsored a college football bowl game?

The opportunities for this game are immense and delightful. This is the first time the NFL has had a chance to get its hands on the madness of bowl season, and the prospects of a Big Ten-ACC matchup leading to a 13-7 Rutgers vs. Wake Forest final cannot be ignored.

But will Detroit be the only NFL city trying to get in the act? It's a copycat league after all, so surely swarms of other teams will try to get a bowl game of their own. Here are four possible options as we at SB Nation try to imagine the possibilites.

It took an hour after I called for the police to finally send someone out, and the officer who pulled up didn't seem terribly sympathetic.

"You reported a bowl fraud, is that correct?"

I nodded, and gave him the background. Back in 2008, I'd just been laid off, but I was trying to put a good face on things and see it as an opportunity to try something new. A recent inheritance had given me some money to play with, so why not start my own business? It was around that time that I heard the radio ad:

LOVE SPORTS? LOVE BEING YOUR OWN BOSS? WANT TO BE RICH? I MEAN OUTBACK STEAKHOUSE FOR BREAKFAST RICH? WARREN SAPP HAS THE ANSWERS FOR YOU! COME TO WARREN'S EASY BOWL OWNERSHIP SEMINAR THIS SATURDAY AT THE AIRPORT MARRIOTT. TICKETS ARE ONLY FIFTY NINE NINETY FIVE AND WILL SELL OUT! DON'T MISS THE CHANCE TO CHANGE YOUR FINANCIAL DESTINY.

Sixty bucks? Even if it was a scam, I'd easily pay that to see Tampa's most legendary defensive lineman. And oh, he was silver-tongued. Warren told us all how bowl games were "the last truly unregulated investment opportunity in America." He had diagrams and charts, all of which suggested we couldn't lose money on these bowls even if we tried. I'd never felt so excited, so powerful. Before I knew it, I was sitting with one of Sapp's Bowl Licensing Experts, running the numbers, and an hour later, I was the first CEO of the Tampa Bay BucBowl.

Of course, the excitement was all a mirage. Shipment of the bowl was delayed by a customs agent strike in Thailand, they told me. When it finally did show up, two months late, it was missing several pieces and had the VIN scratched off. I was confused, and angry. This wasn't what Warren had sold me on, but when I called the company, they reviewed my contract. In my fervor, I hadn't noticed that I'd only signed on at the Conference USA Level, which entitled me to "one (1) refurbished bowl game, as is, to which purchaser waives any warranty, express or implied, of merchantability or fitness."

They couldn't refund my money, but, I was told, for an additional $20,000, I could upgrade to the Coastal Division Level, which came with three years of repair coverage and a signed photo of Warren sacking Elvis Grbac. At that point, I didn't see much other choice.

The police say they've got my complaint on file and they'll contact me if anything turns up. I'm not expecting to hear from them either.

Let's remember the plight of the abandoned plans for the Cleveland Browns Bowl, which was certainly supposed to happen in 1995, I bet.

They were locked in. They made all the t-shirts. They even bought a super cool banner that was weatherproof and four-color. I mean, this was serious stuff.

But we all know what happened next. Art Modell hated college football. Go look it up on an internet search engine. He thought it was gimmicky, and he had a long-standing feud with Bill Snyder that stemmed from a hearts game. Art Modell held grudges, and he was one of the more illogical owners in the NFL.

It drove him mad thinking about amateur football players prancing around soiling the field he built. He couldn't sleep. He lost about 30 pounds because he couldn't even enjoy a pastrami sandwich at his favorite restaurant, Slyman's. The only thing he could think about was how he would have to replace every single blade of grass and bench and room anyone associated with college football came into contact with. It would leave him bankrupt. The team would have to fold.

So he moved the team to Baltimore to avoid playing the game. The contracts were signed. The futuristic holographic cups were shipped. It was the only way out. Everything associated with the Cleveland Browns Bowl was buried in a tunnel under Lake Erie, never to be spoke of again. Rumor has it Jonathan Mikan had a Cleveland Browns Bowl keychain, but no one has seen him since 1999.

Today, everyone's favorite subprime lender, Dan Gilbert, is assuredly spearheading the charge to revive the Cleveland Browns Bowl. He's assuming Jimmy Haslam is going to get the boot, and he's taking all his assets and his bow ties and his clout with the local politicians to build his very own Olympic village, where First Energy Field will be the crown jewel.

There will be plenty of table games and booths to refinance your mortgage, and if you're really lucky, Gilbert will hire you at $10 an hour to join his army idyllic community, which is a future somewhere between the streets of The Running Man and The Adventures of Priscilla, Queen of the Desert.

And with that, the result of a slight detour in an otherwise dour sales meeting, the St. Louis Rams Bowl was born.

The Rams blitzed the community with outreach, part of the effort to rebrand the team that most of St. Louis forgot it had. Encouraging a state full of chubby kids to "Play 60" with Smucker's jelly was only moving the ball so far. It was the marketing equivalent of Pat Shurmur's offense.

There had to be some way to awaken the region's latent football fans, elevate the team's image and maybe show voters just how essential a football stadium could be.

Rams owner Stan Kroenke had bought the Outdoor Channel, satellite television's most popular outdoor channel. His network landed a deal to broadcast the game. It got wedged between a Ted Nugent special and a show about SWAT teams.

Eyebrows raised when Illinois got permanently inserted into the mix. Mizzou, now part of the SEC, had snubbed the offer, even if it meant no bowl game for another five years. So it's now Illinois versus whatever team boasts Charlie Weis on its staff.

Early ticket sales struggled. Suburban moms boycotted the game due to its broadcast on a channel propped up by the gun lobby. Hunters skipped the event because it ate up a three-hour block of their favorite shows. And, nobody really watches Illinois football games.

So here it is, the St. Louis Rams Bowl on life support. The next call to be made is to the Cardinals, to see if they can hold their annual winter autograph session in the main lobby and replay 2011 NLCS highlights on the big screen. Eventually, the Rams Bowl will go the way of the city's NBA and MLS efforts, turned away by the Provel cheese mafia that runs the city, buggered by a rash of parking lot break-ins and ignored because it is not baseball.

It's contractually supposed to be any SEC team vs. any SEC team, but it always ends up just being an aging Deion Sanders and Tim McKyer lateraling an intercepted ball back and forth for three hours while everyone wonders why the PA is playing Saliva instead of Pastor Troy.

Also, every bowl scout only goes to games already being held inside the city of Atlanta's perimeter, because, as has been noted, ain't nothing outside I-285 but fuckin' trees. This means Clemson gets recommended every year, because Clemson plays here like four times a season, approximately.

Also, the roof looks like this, except it says "replace with animation bowl game." 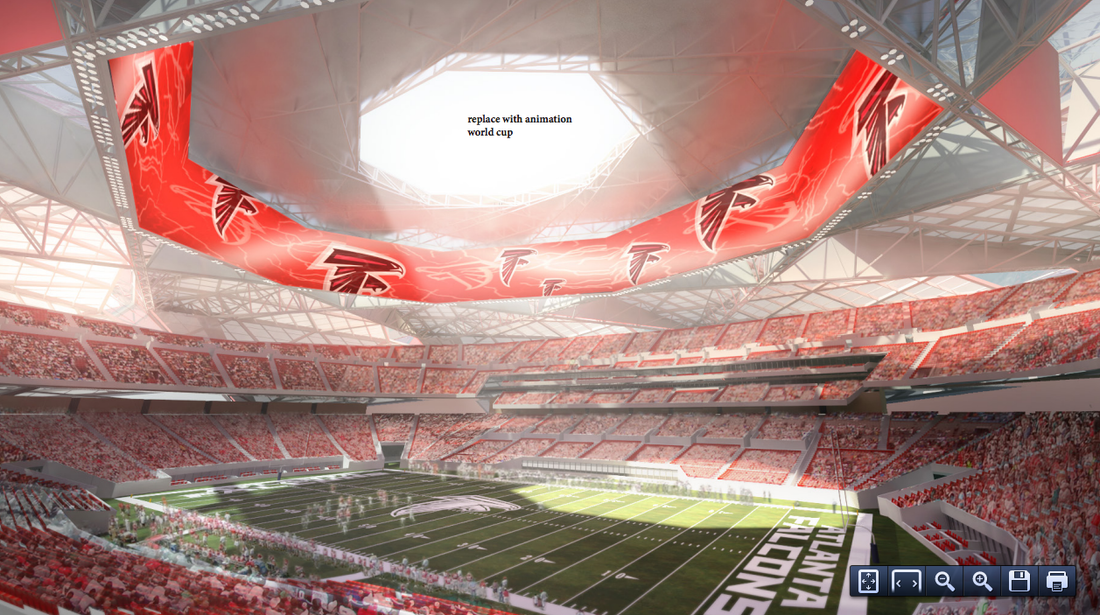 Now it's your turn!

How would your team's bowl game go? Pretty great, I bet!