2013 Georgia football's 10 things to know: Only a few more yards to go

The timing was almost perfect for Georgia in 2012. Can the Dawgs and their amazing offense overcome a green defense and a brutal early schedule to put themselves in position for another national title run? For more Bulldogs, visit Georgia site Dawg Sports.

Share All sharing options for: 2013 Georgia football's 10 things to know: Only a few more yards to go

I have to update my examples. For a while now, one of my general truisms about college football has been that the way you eventually break through and win a national title is simply by continuously putting a strong product on the field and hoping the timing works out eventually. Sometimes it works out immediately and then stops (see: Bob Stoops). Sometimes it takes a while (Mack Brown). Sometimes it takes a long while (Tom Osborne, Bobby Bowden).

For years, this was my defense of Georgia head coach Mark Richt. To those who would inevitably say, "He can't win the big one," or question his ability to build an elite team, I would simply point out that if the 2002 Georgia team had played in 2001, 2003, 2006, or any other year that didn't see two undefeated teams in the national title game, Richt would have, at the very least, a BCS Championship runner-up line on his resume.

Midway through the season, the narrative was pretty easy: The Georgia offense was breaking through, but despite Jarvis Jones' incredible play, the defense was explosively average. Georgia rose to fifth in the country in early-October but got its comeuppance in the form of a 35-7 loss at South Carolina. The Dawgs fell into the teens, and with a game against No. 3 Florida on the horizon, this appeared doomed to only be a 10-2 (or so) season with a January 1 bowl game against a Big Ten team.

But then Georgia beat Florida, and for a month, the Dawgs looked the part of an honest-to-goodness title contender, with an offense that was getting even better and a defense that had stabilized. And other teams kept losing. Georgia clinched the SEC East title, romped over Georgia Tech on Thanksgiving weekend, and found itself ranked third in the country with a shot at No. 2 Alabama in the SEC title game. Granted, "All they've got to do is beat Alabama..." is not typically a call for success, but damned if Georgia didn't look like it was going to do just that for a good portion of December 1.

After 28 minutes, Georgia led Alabama, 7-0. The Tide utilized a quick TD-INT-FG combination to go up, 10-7, at halftime. Georgia was surviving on defense and dominating on special teams, and when the Dawgs blocked a field goal and returned it for a touchdown, they suddenly led the best team in the country, 21-10, with under 22 minutes left in the game.

I'm telling you this as if you didn't already know what happened. This was kind of a classic game. Alabama came back -- of course it did -- and the teams traded scores until the end, when Georgia got one last chance to win the game.

As he had for most of the season, offensive coordinator Mike Bobo made some brilliant play-calls down the stretch, but after some wonderful late-season play and even more wonderful timing got Georgia to within a few yards of the national title game, a random, deflected ball and six damn seconds kept the Dawgs out of it. Sports, man.

Over the course of the Mark Richt era in Athens, Georgia has struggled to get the best of Florida. He lost five of his first six against the Gators, and it has been a mark of progress that he has split the last six. The Florida-Georgia game is obviously a big rivalry, but for Georgia, it is an incredible spark, for better or worse, for the rest of the season.

But when the Dawgs win that game, they wreck shop for the rest of the regular season. They certainly did last year.

If we ignore the Georgia Southern game as the we're-only-paying-half-attention contest these late-season FCS games usually are, we see a team that went from playing great offense and above-average defense to one playing nearly perfect offense and great D. (These averages remain reasonably similar even if you include the GSU game.) Georgia took a 2007-esque leap following survival in Jacksonville, and it almost took the Dawgs to the national title game. 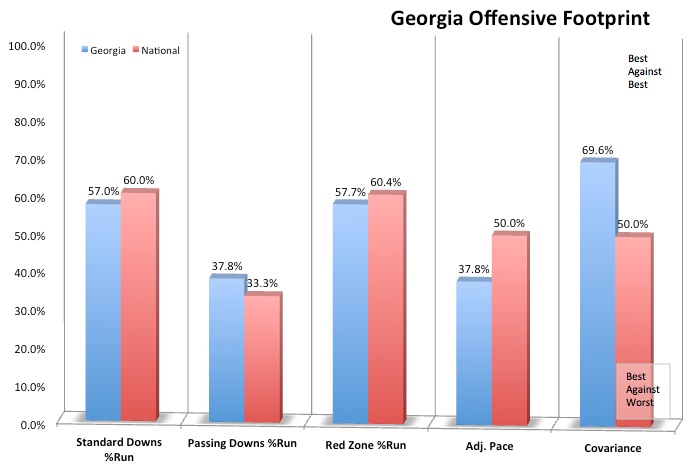 I'll save the "Did he improve drastically in recent years, or were the haters just hating all along?" debate for others; all I know for sure is that he was pulling the strings for the most underrated offense in the country last year.

Georgia ranked fourth in Off. F/+ last season, first in Off. S&P+. The Bulldogs lost two key receivers and just kept throwing better and better as the season went on. Mix in an explosive run game and aggressive passing downs play-calling, and you've got one ferocious offense, one that perhaps didn't get its due in 2012 because Georgia operated at an extremely slow pace. But let's put it this way: If Georgia had averaged a Baylor-esque 82 plays per game, the Dawgs would have also averaged 581 yards, better than Louisiana Tech, better than Baylor, better than Texas A&M, better than Oklahoma State, better than Oregon. The Dawgs are the poster boys for pace adjustments.

Put as simply as possible, Bobo was the best play-caller in the country last year. He put his freshman backs in position to succeed, he leaned on his veteran quarterbacks, and he called some of the most well-timed screens you'll ever see. You've got this one against Missouri, for one, and pardon me while I embed this play in a post for about the 16th time this season (if only as an apology to Georgia fans for the Bama clip above):

Bobo had it going in 2012 -- I even loved that he didn't call timeout at the end of the Alabama game; when you've got the best defense on the ropes, don't let it regroup -- almost to the point where you wonder if his timing and play-calling were unsustainably great.

5. This might be the best offense in the country

Pace aside, this offense might be even better in 2013. Bobo was relying on a pair of freshman running backs and really did have to deal with a rotating supporting cast in the receiving corps. But freshmen turn into sophomores, and receivers get healthy.

Todd Gurley and Keith Marshall, whose last names combine to rhyme with "Herschel," gained 2,144 yards and scored 25 touchdowns last year. Gurley was a strong every-down power back with some explosiveness, while Marshall was a homerun hitter with a little bit of power. They are basically the entire show this year -- the Nos. 3-5 running backs are gone, so if Gurley or Marshall gets hurt, more true freshmen are getting carries -- but what a show that is. Oh yeah, and basically the entire two-deep on the offensive line returns, with 101 career starts.

And if healthy, this receiving corps could be ridiculous, as well. Malcolm Mitchell has the potential to fill in for the explosive Tavarres King, Arthur Lynch was a revelation at tight end, Michael Bennett was in the middle of a breakout season in 2012 when he hurt his knee, four-star junior college transfer Jonathon Rumph joins the mix (along with two four-star freshmen), and if you want to get an idea for Chris Conley's potential, just watch the above clip a few more times. His technique is still a work in progress (but hey, whose isn't?), but that speed is just ridiculous. 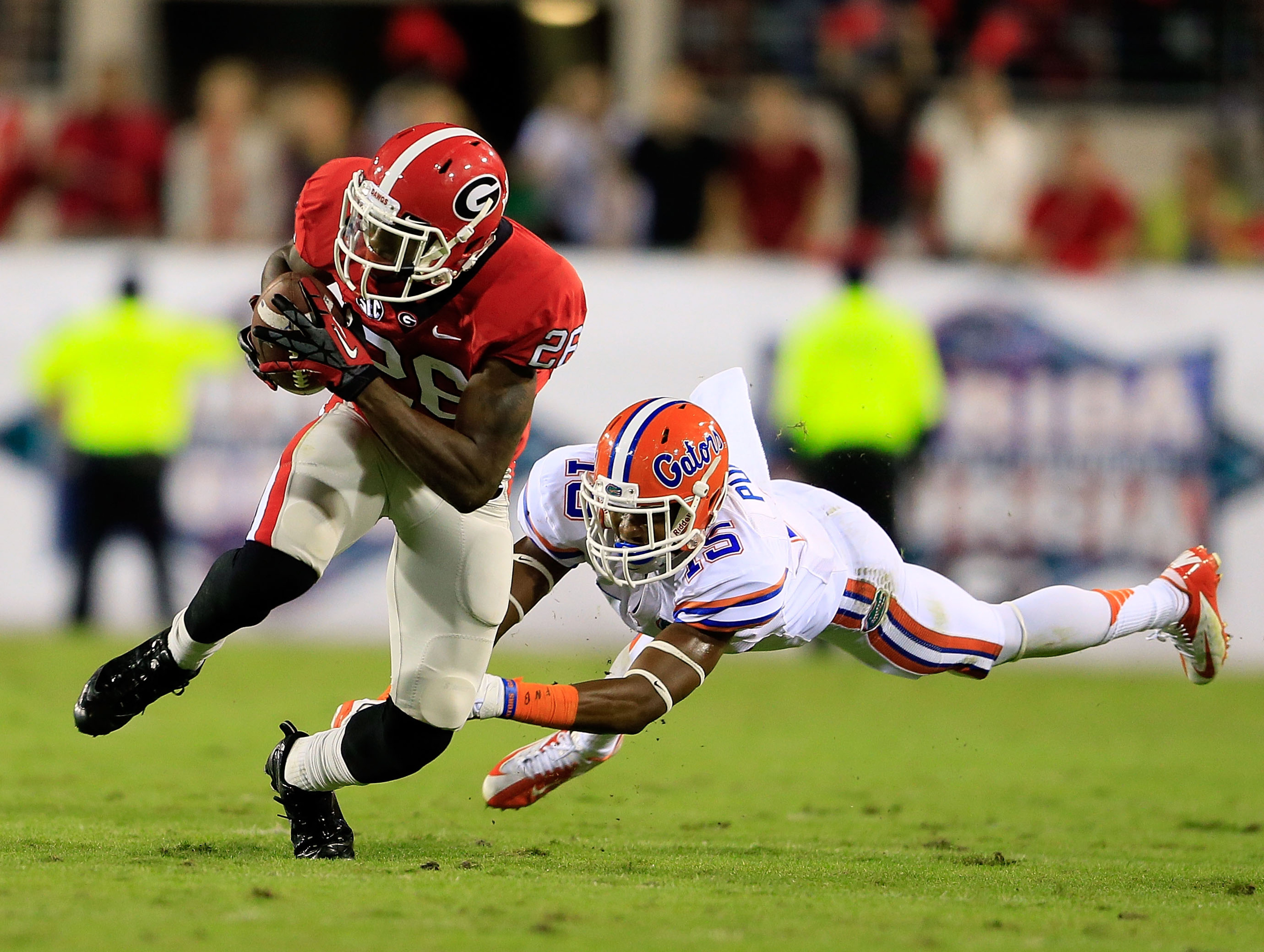 Georgia loses so few weapons from last year's offense that I feel compelled to focus a bit on the biggest one.

As good as players like Bennett, Conley, Lynch, etc., looked last season, nobody could touch King's combination of efficiency (a perfectly solid 62 percent catch rate) and absurd explosiveness (22.6 yards per catch). King caught nine passes for 188 yards versus Kentucky, three for 104 versus Nebraska, and a ridiculous five for 142 versus Alabama, which is like 15 for 500 against a mortal defense. Mitchell could very well be a strong No. 1 receiver, but King was more than strong. He always had the explosiveness, but his efficiency improved dramatically in 2012; so did Georgia's offense. 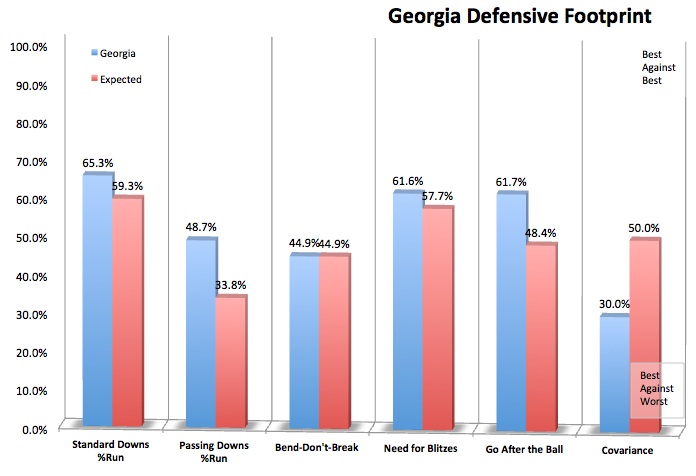 I pointed out in last week's South Carolina preview how opponents tended to run a lot against the Gamecocks on passing downs for fear of Clowney obliteration. But opponents only ran 38 percent of the time on passing downs against South Carolina; they ran nearly 50 percent of the time on Georgia. Clowney may hit harder than Jones did, but Jones had an even larger impact on opponents' game plans.

8. How well have you recruited, Coach?

And despite all of those upperclassman stars -- Jones, John Jenkins, Kwame Geathers, Alec Ogletree, Bacarri Rambo, Shawn Williams, Sanders Commings, Branden Smith -- this was still only a good, not great, defense for most of the year. Yes, there were suspensions and injuries involved, and yes the unit caught fire late in the year. But it caught fire mostly because of players who are now gone.

As high as I am on Georgia's offense, I'm equally wary of Georgia's defense. It will still pass the eyeball test by all means, and it might eventually find a high level of play, but look at the Dawgs' schedule below. Three of their four toughest games happen before October. Do you really, honestly think this defense will find an elite level of play that quickly with this many new pieces? I don't.

Something else that will need to have improved quickly this September: place-kicking. Like A&M, Georgia had a freshman kicker who was rather scattershot in 2012, missing four PATs and quite a few long field goals. If Georgia fancies itself a national title contender, it will need every point it can get against Clemson, South Carolina, LSU, Florida and, perhaps, the SEC West champion in early-December. Don't blow free points.

This is a Hagler-Hearnes schedule right here. Whatever Georgia's potential is in 2013, the Dawgs must reach it from the opening bell, or else they'll be Hearnes'd by late-September. There are plenty of wins to be found on the back end of the schedule, and I would be pretty surprised if this team didn't end up at least 10-3, but if they aspire to more than that, then on August 31 Malcolm Mitchell will have to be a full-on, Tavarres-esque No. 1, Jordan Jenkins will have to be capable of pulling a Jarvis Jones on Clemson's Tajh Boyd, a new set of big, imposing tackles will have to immediately play to their recruiting potential, and a young secondary will have to be ready for a steady line of fire from Clemson's incredible offense. And then, seven days later, Jadeveon Clowney comes to town.

Mark Richt is proof that patience can pay off. He was a victim of poor timing a decade ago, and he was the beneficiary of a patient athletic director when he was going 14-12 from 2009-10. Now entering his 13th year in Athens, he has in place a program that almost feels self-sustaining. The recruiting is great, the weapons are legion, the coordinators are good at their jobs, and unless fortunes drastically change (which happens from time to time), Georgia is set up for quite a few top-15 finishes moving forward.

But despite the offense, the combination of a green defense and a rough early slate will probably prevent the Dawgs from reaching last year's late heights. Richt just has to hope that, the next time his timing is right, Georgia can gain about five more yards.