For just the second time in the Les Miles era, LSU is looking at a preseason ranking worse than 11th. It'll still be ranked, but elite play is not expected of the Tigers this time around. But with a strong-as-ever running game, a strangely underrated secondary, and a good-as-always special teams unit, Miles' Bayou Bengals might make us feel pretty silly for doubting them. For more Tigers, visit LSU site And the Valley Shook.

Pop quiz: What's an average season for LSU and Les Miles? Is there such a thing?

There are only three constants in Baton Rouge, really: game-changing special teams play (while the Special Teams F/+ top-10 list changes dramatically from year to year, LSU has been in it five straight years), down-to-the-wire games (eight one-possession finishes in 2012, eight in 2010, seven in 2009), and Les Miles being Les Miles.

Two years ago, I wrote this about Miles and LSU, and it still rings totally true.

But to the extent that meaningful, existential thought can be applied to this beautifully flawed obsession called college football, Les Miles will probably be involved. To watch a Les Miles team operating on that wonderful, double-green, yard-markers-every-five-yards field at Tiger Stadium is to witness existence in all its beauty, humor, strength and ridiculous vulnerability. […]

There are no mundane sensations on the Bayou, it seems. There is no fear, only terror. No casual delight, only pure, joyous bliss. No tipsy, only drunk. It is exactly like being an LSU fan. […]

In an era of coachspeak and clinical, precise offenses, Les Miles has figured out how to strip games down to a visceral, chaotic core; you may not want to go there, but you're going there, and you better know how to handle yourself in this bizarre world of odd time management, spectacular fake field goals and general ridiculousness. Because he does. His record in close games proves that. In the last six years, no team has played in, or won, more close games than Miles' Bayou Bengals. College football is a land full of wonder, mystery and danger. Some say to survive it, you need to be as mad as a hatter. Especially in Louisiana.

And while we're writing them off to a certain degree in 2013 following some solid attrition on both lines, we probably shouldn't. This coming fall, LSU will once again pass the eyeball test with flying colors, once again swarm viciously on passing downs, and once again play maddening, inconsistent, and occasionally powerful and unstoppable offense. And its season will once again be defined by the eight (or so) down-to-the-wire games that take years off of the lives of every LSU fan in the Bayou.

More: Bill C. previewing every SEC team And every other team, too

Tiger Stadium has long been known as one of college football's most intimidating venues. Ninety-two thousand raucous LSU fans, a live tiger, and a fired-up, top-10 squad await your arrival. In 2012, Tiger Stadium played one heck of a role in keeping LSU in the top 10. Away from Baton Rouge, the Tigers were barely above average, even despite the win at Texas A&M. Inside Tiger Stadium, they were damn near untouchable.

In Baton Rouge, LSU beat South Carolina (then ranked No. 3 in the country) and almost took down No. 1 Alabama. Away from Baton Rouge, LSU almost lost to Auburn and Arkansas. Yes, the Tigers did win at College Station, but they were vulnerable to upset bids with a terribly sluggish offense.

Road struggles were one of many hints that this young offense wasn't ready for the big-time. That's what tends to happen with a new quarterback, a freshman running back, and a still-raw receiving corps. In 2013, the line takes a hit, but the skill positions are in much better shape overall. This could lead to a little more home-road stability. 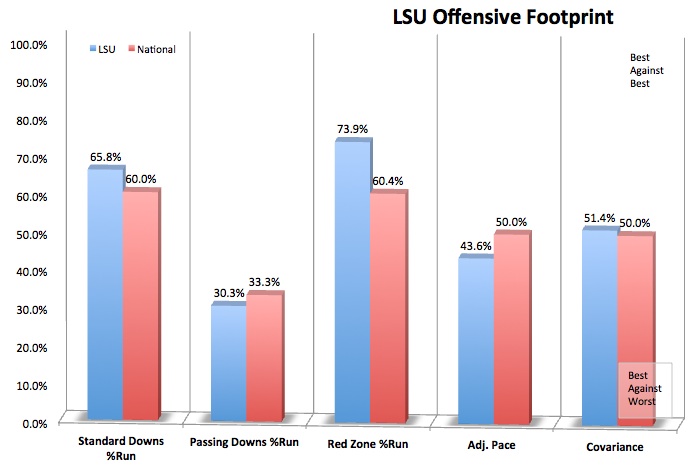 Did LSU pass too much?

No, seriously. Did LSU, a team that leaned on the run as far as it could take it in 2011 (and the run took it pretty far), throw too much for its own good in 2012? The Tigers were a top-10 rushing team last year, with a strong line opening holes against great run defenses and with a true freshman showing serious moxie.

Jeremy Hill entered an incredibly crowded backfield that already had four proven (or at least semi-proven) options, and over the last half of the season, he was the No. 1 guy. In three weeks against South Carolina, Texas A&M, and Alabama, he rushed 64 times for 358 yards and four touchdowns. He scored three times against Ole Miss and gained 124 yards in the bowl game versus Clemson. He overtook a completely underwhelming Spencer Ware on the totem pole, and he and the other four backs gave LSU a reason to lean even more heavily on the run in 2012 than it did in 2011.

But LSU didn't. Instead, LSU ran and passed an almost completely normal amount; the Tigers were five percent above the national average running on standard downs but passed more than average on passing downs. They put a lot of trust in quarterback Zach Mettenberger and the aforementioned raw receiving corps, and it didn't necessarily pay off. LSU was slightly below average with the forward pass, showing big-play ability on passing downs but little efficiency. As good as the passing game looked during LSU's second-half comeback against Alabama, that wasn't the norm.

The passing game did improve, however. Starting with the Alabama game, Mettenberger and the receiving corps did seem to improve their rapport.

Former five-star recruit Jarvis Landry caught fire in the last five games, catching 33 passes for 357 yards and four scores (first eight games: 23 catches, 216 yards, one score). With Landry and Odell Beckham, Jr., back, there is hope for the passing game. But the Tigers attempted balance to their own detriment last year.

(And Alex Trebek is still on Jeopardy!, right? Jeopardy! is still a thing, right? That's an aged reference, I'll admit.)

Five LSU running backs averaged at least three carries per game in 2012; two averaged worse than 3.5 highlight yards per opportunity. Those two are gone, and the three most explosive backs return. Two of them, at least.

With Hill and Kenny Hilliard leading the way (assuming Hill's suspension ends at some point), the run game should be quite explosive; the ground game's efficiency will depend on how quickly a reasonably new line can gel following the departure of two three-year starters. Last year's line was fantastic at preventing negative plays and keeping LSU on schedule. 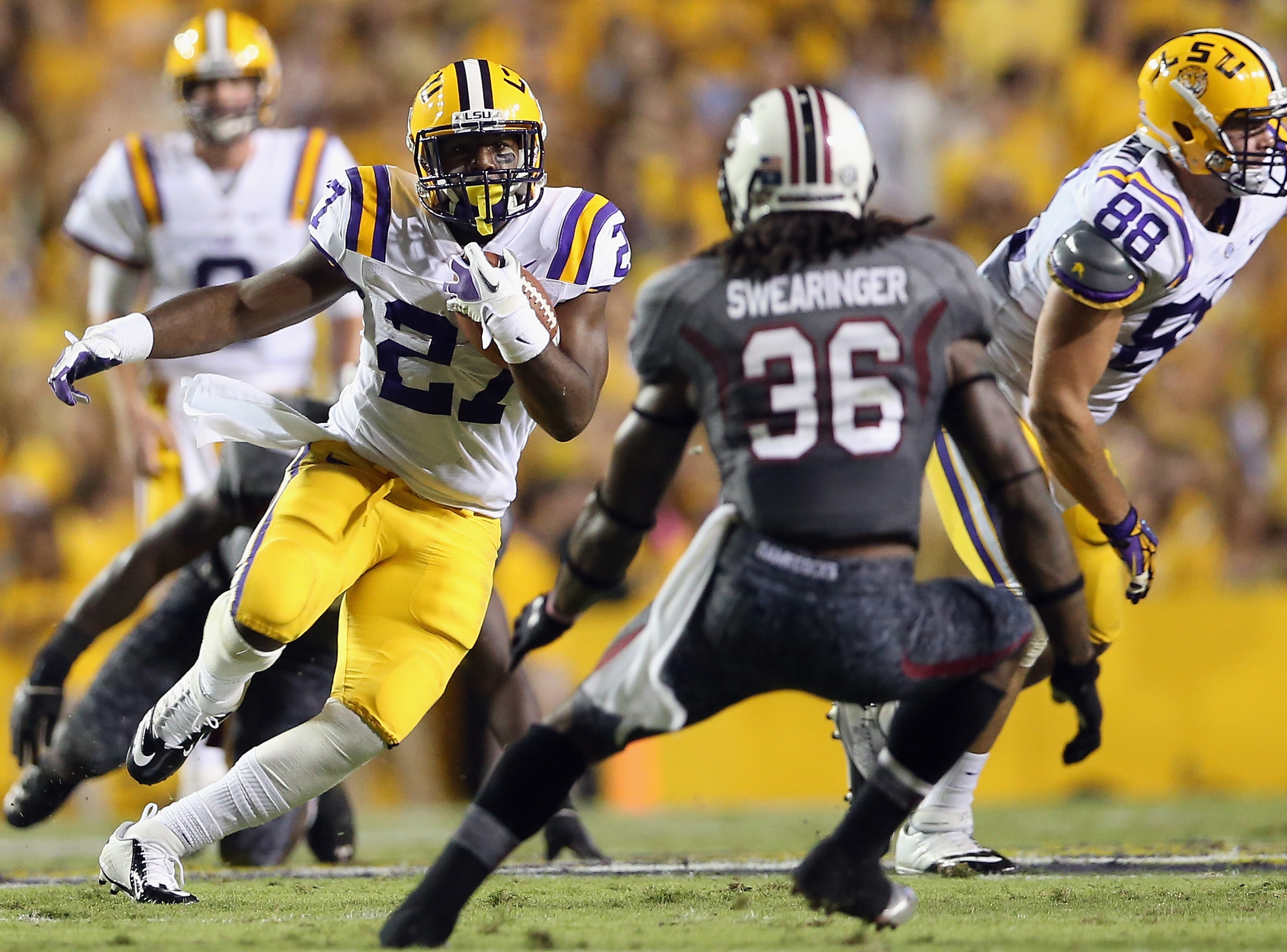 Despite some inconsistency, the duo of Jarvis Landry and Odell Beckham, Jr., worked pretty well by the end of the season. Landry was a possession receiver with upside, while Beckham was more of an all-or-nothing guy with high-end speed and minimal technique. LSU's passing game went from below average to solid with Landry's emergence, but the Tigers still need one more semi-dependable weapon if they're going to be passing as much as they apparently want to.

There is an absurd number of former four-star recruits in this unit; who might step up? Can Kadron Boone raise his catch rate to an acceptable level? Is James Wright ready to see a few more passes? Might junior college transfer Quantavius Leslie be the answer? And what about the tight end position that nearly vanished from the passing game last year? 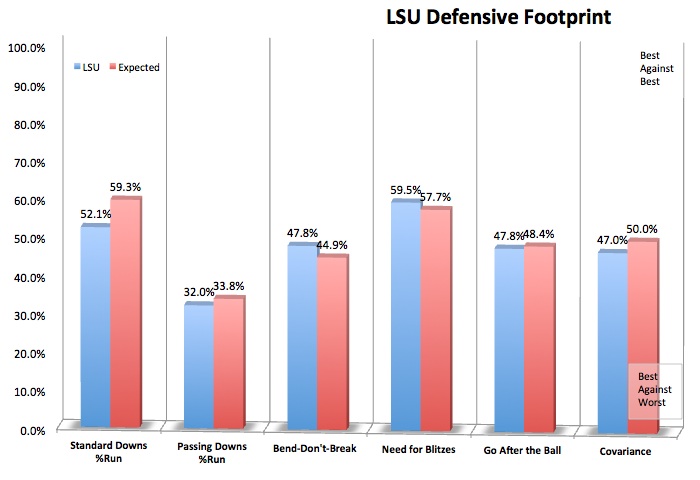 6. Fret not about the defensive line

The primary reason why people seem a bit lower on LSU this season is because the defensive line was decimated by departures. The top three ends are gone, as are two of the top three tackles. But damned if I just cannot get too worried about them.

For one thing, the LSU pass rush was only good last year, not great. Opponents didn't fear the pass rush an overt amount; whereas opponents ran a ton on passing downs against South Carolina and Georgia to avoid Jadeveon Clowney and Jarvis Jones, they really didn't stray from the pass in fear of Barkevious Mingo and Sam Montgomery (though perhaps they should have at times). That may have had to do with the fact that LSU wasn't blitzing a lot (linebackers had just five sacks) and was using linebackers to support the young secondary.

Regardless, now the secondary is seasoned and exciting, and defensive coordinator John Chavis can probably get away with a bit more aggressiveness in the blitz if he wants to. Safety Micah Eugene did a decent Honey Badger impersonation at times in 2012, and between him and a deep corps of linebackers, I think the pass rush will end up alright even if the defensive end position regresses. And between Anthony Johnson and Ego Ferguson, I can't worry much about the tackle position (though depth could be a concern).

Last year, LSU's defensive two-deep was structured in a way that seemed to acknowledge that the Tigers were going to lose some of their steadiest players. The second string was made up of nearly all true freshmen and redshirt freshmen, and LSU utilized a large number of players throughout the season.

Kevin Minter and Lamin Barrow were the clear leaders at linebacker, but four other players (three freshmen) logged at least 8.5 tackles. And in the secondary, three freshmen got a lot of time in backup roles. A few other redshirting freshmen were listed on the two-deep, presumably getting a lot of "just in case" reps in practice.

The depth the Tigers were attempting to maintain last year could pay off in spite of the departures of Minter, safety Eric Reid and corner Tharold Simon. Sophomores Deion Jones, Jalen Mills, Micah Eugene, and Jalen Collins all showed glimpses of major star power last year; now they'll get a bigger spotlight.

8. Is it possible for the LSU secondary to be underrated?

Despite an only decent pass rush, LSU had the No. 1 passing-downs defense in the country last year. The perpetual nickel defense probably helped, as did linebackers who weren't blitzing.

LSU leaned heavily on its punting to produce another top-10 special teams performance, and while the return game is in flux (Michael Ford is gone, and Odell Beckham, Jr., is a little too all-or-nothing at times), punting might not actually be a question mark. And let's face it: LSU gets the benefit of the doubt at special teams until proven otherwise.

10. Another season defined by close games

LSU is going to once again be ridiculously big, strong, fast, and, yes, unstable in 2013. The Tigers will also play six teams projected in the top 30. They get huge home games versus Florida and Texas A&M, a huge neutral-site game versus TCU to start the season, and tough road trips to Georgia, Ole Miss, and Alabama. Most of these games will be close, and LSU's season will once again be defined by its ability to muddy up the water, make plays in the fourth quarter, and win a majority of its close games.

I know exactly why people are a little down on LSU this year, but I just can't convince myself to join them. I see a top-10 team here, with strong-as-always special teams, a defense with a secondary good enough to compensate for losses on the line, and an offense that will probably look good (better than in 2012, at least) throwing the football. The Tigers aren't going to win the SEC West, but whatever average is for Les Miles at this point, he should see at least another average season this fall.

• A word with Kevin Sumlin on recruiting and video games

• What’s the point of playing Texas?