Should conference championship games be on campus? 10 times it could've changed things

We found a few times in the conference championship era of college football when a team that would have hosted a title game ended up losing at a neutral site by five points or less. Feast, fans of revisionist history.

Share All sharing options for: Should conference championship games be on campus? 10 times it could've changed things

Wednesday, ACC commissioner John Swofford discussed the idea of having the ACC Championship Game at campus sites, like the Pac-12 and Conference-USA, as opposed to Charlotte.

It seems like a win-win. Remember what the ACC Championship Game sometimes looks like? Put those games at campus sites, and you can build an atmosphere and reward a team for a strong regular season by giving it home-field advantage.

Which is where we got wondering: what would have happened if some of those conference championship games that were actually played at neutral sites had rewarded the team with the better regular season by giving it an extra home game?

It panned out for Stanford in 2012, who got to play the title game at Stanford Stadium after going 8-1 in conference play as opposed to UCLA's 6-3. The Cardinal won 27-24 on a fourth quarter field goal. That falls within the Vegas-standard range for home-field advantage, which usually pushes a line about 3.5 points in the direction of the host.

We decided to take a look back at the now 20-plus-year history of conference championship games and pretend that each one was played at the home stadium of the team that would have gotten a home game under the Pac-12's selection process for deciding who hosts. We found 10 games where the would-be host lost by under five points, slightly over what Vegas considers the difference provided by home-field advantage.

So, if you're a big fan of what-ifs -- or a wistful Michigan State, Georgia Tech, Texas, Kansas State, or Alabama fan -- take a peek.

The Big Ten made a huge splash with its first-ever conference championship, an amazing game featuring #ALLRUSSELLWILSONEVERYTHING, comebacks, and four touchdowns by Montee Ball, but it could've gone differently at a home site.

Michigan State had beaten Wisconsin in the first matchup between these two, a thriller decided on a late Hail Mary that bounced off one Spartans receiver's facemask into the hands of another, who may or may not have been in the end zone. That allowed the Badgers to finish 7-1 instead of 6-2, but there was no reward for that. The game was in Indy, and Wilson led his team on two fourth quarter scoring drives for a three-point win. The two had played to a virtual dead heat in East Lansing, but a neutral site might've helped turn things in Wisconsin's favor.

The Badgers would go on to lose in the Rose Bowl to Oregon, while the Spartans would beat a strong Georgia team in triple overtime in the Outback Bowl. Maybe things coulda swapped -- and the Big Ten could've looked better in its signature bowl game -- if Michigan State had been in Pasadena.

The Huskies swept their conference slate behind Chandler Harnish, one of the most prolific passers in MAC history. They'd slipped into the BCS rankings at No. 25, and were favored by 17 points.

But instead of a game in DeKalb, where the Huskies were 5-0, they played in Ford Field, a stadium with 65,000 seats and 12,031 in attendance. Electric! Armand Robinson would catch a game-winning touchdown with 33 seconds left, and the RedHawks would win.

NIU could have busted the BCS bracket a few years earlier than previously planned with a win -- it was already ranked, although it would have been quite a jump -- but instead was left to pound on Fresno State in the Humanitarian Bowl. Nobody deserves to play in Boise in December.

The 2006 ACC Championship Game may have been the worst conference championship game of all time. It didn't even have the schadenfreude-y fun of Vince Young's Texas pounding on Colorado, 70-3.

The MVP winner was a placekicker, Sam Swank, who did not even make all the field goals he attempted. It was the most #GOACC thing ever. But there was simply nobody else to give it to, so he got it by default. Georgia Tech couldn't capitalize on HAVING CALVIN JOHNSON, and Wake needed a late score for the win.

Could we have been saved by a game in Atlanta? Probably not. But the Yellow Jackets, who were 7-1 in conference with close out-of-conference losses to strong Notre Dame and Georgia squads, could have hosted over a Wake Forest squad that was 6-2. But that would have robbed Wake fans of what's almost indisputably best season in school history, and that would be sad.

Wake would lose to Louisville in the Orange Bowl, but Georgia Tech lost the Gator Bowl to West Virginia anyway. 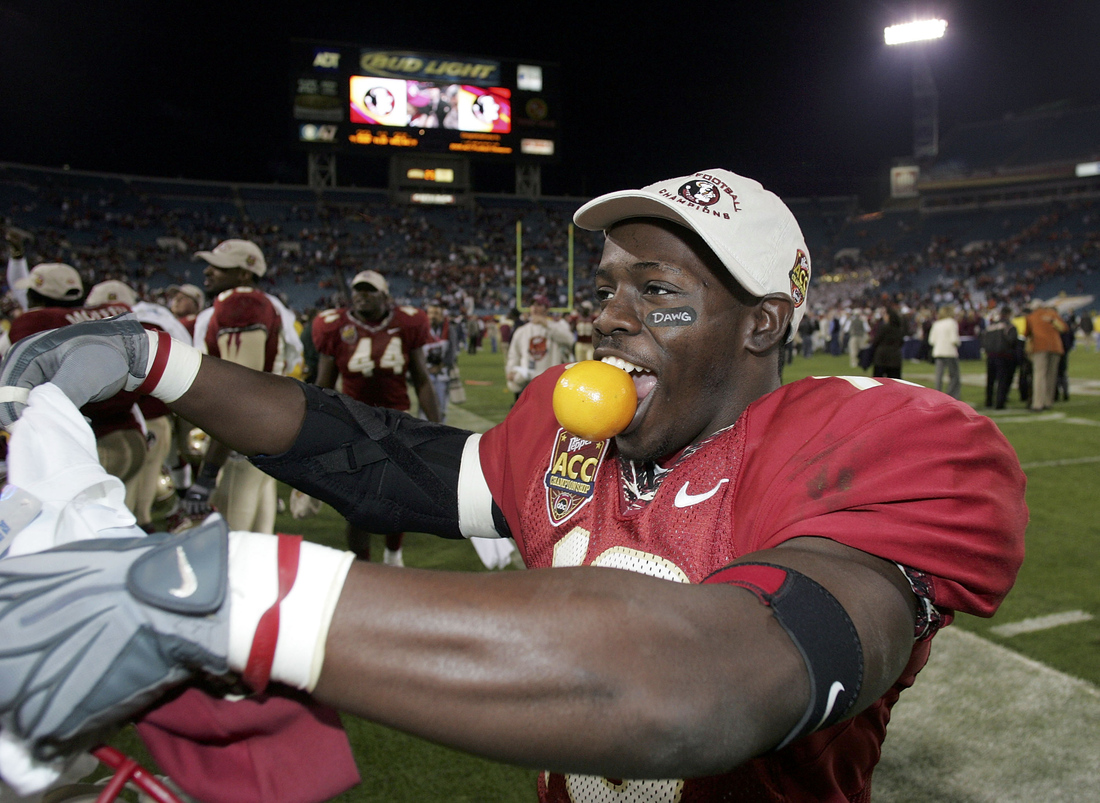 The No. 5-ranked Hokies had the best defense in the country and Marcus Vick at quarterback, going 7-1 in conference, while Florida State was 5-3. But this game was played in Alltel Stadium in Jacksonville, more a FSU home game than a neutral site.

The Hokies were blown out in the third quarter, allowing 24 unanswered points. They'd storm back with 19 of their own in the fourth quarter, but it wasn't enough.

The Seminoles would represent the ACC in the Orange Bowl, losing in triple overtime to No. 3 Penn State in the Orange Bowl, while the Hokies would pour it on Louisville in the Gator Bowl. That title game was destined to be Texas-USC, but Virginia Tech might have done better than FSU in a BCS game.

Yo, NIU should really sue somebody.

It entered this one 6-2 as opposed to Akron's 5-3, but the Zips had won the head-to-head, 48-42, in overtime in Akron. Leave the game at a neutral site, and we still had another exciting, tight game: NIU's Garrett Wolfe went nuts, running for 270 yards on 42 carries. But a touchdown pass from Luke Getsy to Dominik Hixon would give Akron the one-point lead with 10 seconds remaining, NIU couldn't do anything in desperation, and the Huskies lost.

I bet you're thinking its real silly that the MAC plays its games in a listless Ford Field instead of a home site where the games would be more exciting and fairer for the team that did the best in the regular season. I assure you, there's an update on this front later.

Kind of a cop out here, since there's no way that playing this game in Texas Stadium in Dallas constituted anything but a home environment for the Longhorns against the Buffaloes, but the two teams had met earlier in the year in Austin, and Texas had absolutely stomped Colorado, 41-7. These two teams ended the season 7-1 in conference, but on account of the head-to-head, the Longhorns would have been given home field advantage.

Instead, it was at a neutral-ish site, and the Buffaloes led, 36-23, before a random fake punt by Gary Barnett turned into a pick-six.

The Longhorns would win against Washington in the Holiday Bowl, but likely could have faced off against Miami in the title game if they'd won this game and were sitting at 11-1 instead of 10-2. Instead, Colorado went to the Fiesta Bowl -- to get dropped heavily by Oregon -- while Nebraska jumped both Texas and Colorado to play and lose in convincing fashion to the Hurricanes. Perhaps Texas could have been a more worthy opponent, although that Miami team might be the best ever to play college football.

So before deciding to play its championship game at listless Ford Field, the MAC did actually have its games at home sites. But to the best of my ability, I can't figure out any rhyme or reason as to where it decided to play.

The first three MAC Championship games were all at Marshall. Such is to be expected when Chad Pennington and Randy Moss are let loose on a mid-major conference. The fourth game was also at Marshall, but it didn't really deserve that one.

Byron Leftwich had led the Thundering Herd to a 5-3 conference record, but their opponent, Western Michigan, had been 7-1 in MAC play. In West Virginia rather than the west side of the mitten, Leftwich led his team to a 19-14 win, and the Broncos had to go home sad and confused.

But the football gods would get their revenge in 2001. The Thundering Herd went 8-0 in MAC play and were actually nationally ranked, placing at No. 20 in the BCS. Meanwhile, Toledo had gone just 5-2. (As for why one team played fewer conference games than the other, it's clear early 2000's-era #MACtion is just on a different plane of logic.) But the Rockets got to host, and pulled out the surprise 41-36 win.

The mention of this double-OT loss will probably sting for Wildcats fans, and it's probably the most convincing argument for home sites in conference championship games. Kansas State was 11-0, ranked No. 1 in the Coaches Poll and No. 3 in the BCS. A win, and it was likely to appear in the national championship game.

And the Wildcats looked posed to roll, leading 27-12 after three quarters. But Sirr Parker took over with two rushing touchdowns and a two-point conversion to tie the game up, and send it to overtime. After field goals in the first extra session, Parker snagged a game-ending 32-yard touchdown on third-and-17 that gave the Aggies the win and ended the Wildcats' hopes of a first national title.

Had the Wildcats gotten to play in Manhattan (called by Baylor's Art Briles the Big 12's toughest site) and won, they would have been the only undefeated major conference team besides Tennessee, who would eventually become the national champions. Instead, the Wildcats dropped from a BCS game in the first year of the new system and ended up in the Alamo Bowl, where they were understandably bummed and lost to Purdue.

You can make a pretty good argument that Alabama could have had 15 of those national championship thingies instead of the 14 they actually have, if only for home-field advantage.

The Tide entered the third SEC Championship Game undefeated, while Florida had dropped a game to Auburn. But this game was played at a neutral site -- the Georgia Dome -- after the first two championship games had been at Legion Field in Birmingham.

The game was one of the best early championship games, with Alabama going up 23-17, but a Danny Wuerffel touchdown pass with five minutes to go gave the Gators the decisive lead.

The Tide would win the Citrus Bowl against No. 13 Ohio State, leaving the one-point loss in the SEC title game their only blemish. The Gators would go on to lose to a Florida State team they had tied just two games earlier in the Sugar Bowl.

If Alabama had won, it [correction here] probably would have ended up faced off against one of two teams that ended the season undefeated, a Tommie Frazier-led Nebraska squad or Penn State. (Sorry, guys. I was four. Regardless, Bama could've had a shot at claiming another national title, which we all know they love to do.)

• What’s the point of playing Texas?