Notes on day one of SEC Media Days and each coach's remarks. May contain fictional elements.

Will Muschamp was not born.

He exited the womb at near-supersonic speeds, bounced clean off the floor, and lassoed the lights with the umbilicus before landing a snarling dismount on the infant scale.

This is the Florida coach's way of answering questions: listing the entire depth chart, addressing changes in personnel and then attempting to preempt any further questions by listing every single piece of information he knows about his football team. It's blitzing while keeping men in coverage, just what a defensive coach would do. And sometimes one of those men gets to the quarterback, metaphorically speaking:

Muschamp: "We appreciate our friends from Ohio making sure we follow NCAA rules. They certainly know something about NCAA rules."

Remember: when the members of the SEC can agree on nothing else, they can always return to emptying the septic tank into the Big Ten's bedroom window.

He would execute a brilliant heel turn at one point in his career; he would be an excellent bailout tag team partner; he would get knocked out in every match. He'd also be wearing some big-ass boots and the tiniest pair of Goldberg nut-huggers sold in the United States.

More: The rest of our Day 1 coverage

Gary Pinkel is the substitute gym coach of the SEC. 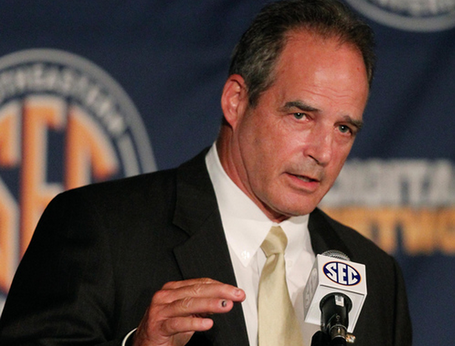 I would like to tell you how baroque, how perfect his boredom is, how many variations on nothing Gary Pinkel can say using human language and his mumbling mouth. I'd like to say that you could put a baby in its crib, have Gary Pinkel read the phone book, and watch your baby fall into the most restful sleep of its life. This is a service Gary Pinkel could and should charge a lot of money for, actually.

Aside from that, Pinkel could have easily walked in as the substitute gym teacher, toting an ancient boxy TV and a DVD of Rudy, because a.) Mr. Gibbons is sick, and totally did not leave a lesson plan, and b.) watching inspirational movies is kind of cardio because Mr. Pinkel says it is. If you need him, he'll be in his office crying and maybe smoking in a non-smoking building.

Other things Gary Pinkel could theoretically be:

But give Pinkel credit: he's like this all the time and mercifully brief because he's a self-aware kind of boring. Gene Chizik opened his mouth and dropped 500 words of static into the public record. Pinkel gets to the point: Mizzou had a plague of injuries last year where it could least afford it, got slapped around on the line of scrimmage as a result and hopes to be better this year, etc., etc.

He smiled on his way out the door, presumably because he heard no furious typing behind him from the press, having said nothing worth noting -- which was the plan all along.

Hugh Freeze: a pastor, but not a pastor caught mid-sermon.

Like a pastor during a spring jamboree planning meeting, when he's got to make sure everyone brings what they're supposed to bring so that the gathering won't just end up with a pile of store-bought chips. Freeze says almost as little as Pinkel, but is much more chipper about it.

Based on how successful he's been early on, one can only conclude he is the SEC's Gustavo Fring and is running an empire of dark secrets from Oxford based on terror, fear and sheer power (or at least he better be, since that's part of the job description for every SEC coach).

Steve Spurrier gimped into the room for the day's finale.

Took the podium. Threw a curveball by eschewing the usual "WELLP!" greeting. Said "Thank you." Grabbed the mic.

Pulled out notes. Said vote to give players pocket money was unanimous at SEC meetings. Also said SEC coaches wondered why the hell Notre Dame was in BCS meetings. Suggested Notre Dame join the ACC "like everyone else." Threw live cat into crowd. Told reporters to deal with it.

Continued airing of grievances. Mentioned SEC scheduling. Also mentioned that Alabama and Georgia didn't play the top three other schools from their divisions. Mentioned how this might not be the fairest thing. Took out a can of spray paint. Wrote "TOUCHDOWN, SPURRIER" on curtains. Lit curtains on fire. Concluded complaints.

Moved on to football. Said he had two good quarterbacks, therefore laying groundwork for benching both of them for the other. Probably multiple times. Got question about Georgia. Mentioned how badly they played last year. Pulled out six-pack from podium. Opened beer and began drinking casually. Lit a few sparklers.

Noted he was gonna be the winningest coach in South Carolina history. Immediately noted that wasn't that hard because it was "only 65 wins." Acknowledged mutual wearing of visors between him and Hugh Freeze. Insinuated his classmates were old people seconds from death by pointing out how half the people at his high school reunion went to bed at 9:30.

Took off shirt. Hit a bucket of range balls into adoring crowd. Injured a few people. Said "You're welcome." Walked in a king. Left a king.

2013 SEC Media Days: Recaps, reactions, and all our live coverage