Purdue's hire of new head coach Darrell Hazell was safe and sensible. But with a flawed roster at his disposal and a brutal schedule on tap, we probably won't begin to learn if he was the right hire until at least 2014. For more Boilermakers, visit Hammer and Rails.

Share All sharing options for: 2013 Purdue football's 10 things to know: Playing it safe

It was the safe, sensible hire in every way. I even gave it a B+ last December. But was it the right hire?

There are red flags. Being that coaching hires always have red flags, this shouldn't be surprising. But let's go through some of them:

Okay, fine, so we don't actually know yet if Hazell's a good hire, just like we don't know about any 2013 hires yet. What we do know, however, is that Purdue needs help. In the eight seasons for which we have F/+ data, the Boilermakers have been below the Big Ten average seven times, far below in each of the last three under Danny Hope. The record has changed through the years 8-6 in 2006, 4-8 in 2010), but for the most part, the quality of the product has not. Hazell certainly knows what that's like after his experience in Kent.

Purdue faced a rare opportunity in 2012; Ohio State and Penn State were ineligible for the postseason, Wisconsin was rebuilding both its offense and coaching staff, and there was a chance that what we'll call an atypical team could sneak out a trip to the Big Ten title game. It wasn't likely, but it was at least conceivable.

And heading toward October, the Boilermakers actually looked like they might be up for the challenge. They handled bad Eastern Kentucky and Eastern Michigan teams as they should have, and they damn near knocked off Notre Dame in South Bend (a result that would become more impressive as the season unfolded and Notre Dame kept winning).

But when conference play began, the candle blew out pretty quickly.

In October, Purdue was as bad as it was good in September. The offense rallied around hobbled (as in, he tore his ACL but came back to play anyway) quarterback Robert Marve, and the defense improved just enough to allow the Boilermakers to get past bad Iowa, Illinois and Indiana squads and rally for bowl eligibility. It wasn't enough to save Danny Hope's job, and that was probably more than fair, but it was still a nice story ... at least until Purdue got run off the field in the bowl by Oklahoma State. 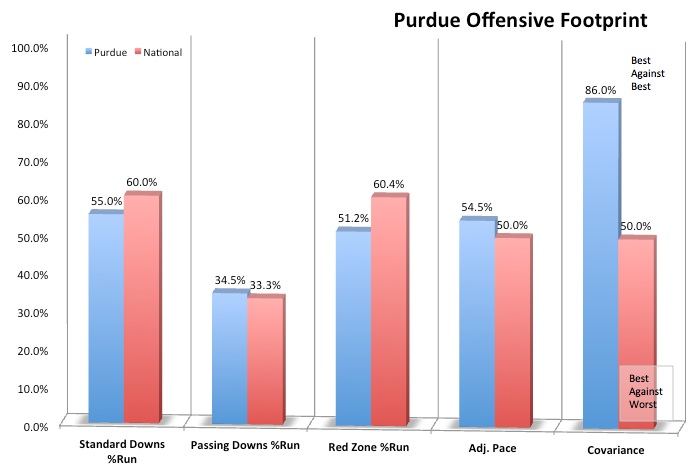 Close your eyes, and think of the tenets of the stereotypical TresselBall offense. You run the ball, you avoid mistakes, you run the ball some more, and if you have Ted Ginn, Jr., you throw some quick, safe, horizontal passes to him in space. Occasionally you go play action. But the assumed goal of TresselBall is to avoid putting your (probably great) defense into inconvenient situations.

That's not really John Shoop Ball. It will be quite interesting to see how Purdue's offense takes shape in 2013 with Shoop serving as Hazell's offensive coordinator. Shoop ran a pretty good pro-style attack at North Carolina -- 41st or better in Off. F/+ in four of the last five seasons, 20th in 2012 -- with an accurate, if limited, quarterback in Bryn Renner and a run-catch threat in Giovani Bernard. This wasn't a high-risk, high-variance attack, but it wasn't incredibly risk-averse, either.

That's probably a good thing, of course, because Purdue doesn't have the typical Tressel defense at its disposal. Playing it overly safe would just result in closer losses.

Purdue's offense had its moments in 2012; two of the top three running backs averaged at least 6.0 yards per carry, for instance. The problem, of course, was that the backs didn't get nearly enough open-field opportunities from a below-average line, and the receivers weren't good enough to break open big plays from short passing. That Purdue was forced to play three different quarterbacks because of injuries didn't help, but all three QBs averaged between 10.3 and 10.6 yards per completion (and only one had a decent completion percentage).

There were a lot of issues here, in other words, but Purdue's greatest weakness came in early-down efficiency. The Boilermakers were 116th in Standard Downs Success Rate+, which means that on first-and-10, second-and-short, or third-and-shorter, they were unable to stay ahead of schedule. The run game was particularly unreliable; though Shoop is not in any way a Tressel disciple, he does fancy a good running game, and that's something Purdue didn't really have. Purdue fans complained about a barrage of bubble screens last year, but one can understand why Danny Hope and company didn't trust the run much, even with the big-play capability.

That has to change. The line must replace its two most experienced pieces, but five players with starting experience do return (52 career starts), and losing experienced players from a good line means a lot more than losing them from a mediocre line.

5. Give the ball to Hunt

For two years, Akeem Hunt has teased us. He's averaged 8.3 yards per carry (in three carries per game) and 14.9 yards per catch (in about one target per game). For an offense bereft of big plays, he seems to have a lot of potential. But for one reason or another -- blocking issues, fumbling problems in practice, frail frame, other -- he just hasn't gotten many opportunities.

That could change in 2013. Not only is Shoop likely to call more runs than his predecessor, but both Akeem Shavers and Ralph Bolden are gone. Hunt and big Brandon Cottom are the only returnees who got carries last season, and while there are some interesting youngsters entering the rotation, one has to figure that Hunt will get as many touches as he can handle this fall. That's a very good thing. He's exciting, and this offense needs some excitement. He could be this offense's Dri Archer.

In theory, Hunt and Cottom could form a decent thunder-and-lightning combo of sorts, and if they're effective, they could do their passing game some serious favors. Quarterback Rob Henry has shown potential through the years, but injuries and inconsistency have prevented any serious progress. Meanwhile, the top two pass targets are gone; that would mean more if Antavian Edison and O.J. Ross had averaged better than 7.1 and 5.9 yards per target, respectively, of course. They're replaceable, but that doesn't mean somebody in this particular receiving corps is capable of replacing them. The three returning receivers who were targeted at least five times last year (Gary Bush, Dolapo Macarthy, Gabe Holmes) combined to average an awful 5.4 yards per target in 2012. 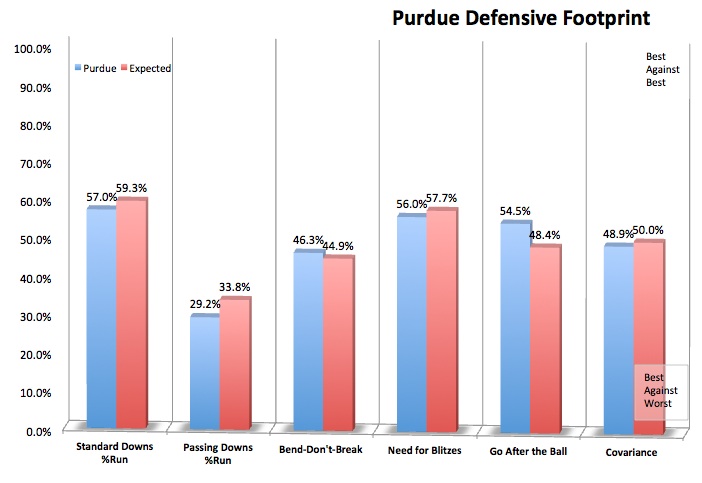 Purdue had a pretty active front four last season; starting linemen combined for a solid 34 tackles for loss, and as you see below, the Boilermakers ranked a solid 33rd in Stuff Rate (run stops behind the line). The problem was that if they weren't making a tackle behind the line, they were probably making it about nine yards downfield.

Like the offense, the Purdue defense was terribly inefficient on the ground, allowing quite a few good plays for every play it made. Purdue was decent to average in most categories, but run efficiency was a constant issue, one that simply must change. That six of the top seven linemen and three of five linebackers return could be a good thing, but the talent to make stops has to be there, too. We'll see what defensive coordinator Greg Hudson is able to figure out in his first year.

Hudson, previously linebackers coach at Florida State, was another telling hire, albeit one with midwestern ties (he went to school at Notre Dame and served five years as Glen Mason's defensive coordinator at Minnesota). Hazell is, as much as possible, basically installing a "pro-style attack" (whatever that term does for you) on both sides of the ball. That works just fine as long as you have pro-style talent. Purdue probably doesn't in 2013.

The one loss up front is a pretty big one. Kawann Short was probably the source of quite a bit of Purdue's run inefficiency -- he was a bit of a risk-taker, at least when I was watching -- but his stats were still great. If you're leading your team in tackles for loss and sacks from the tackle position, and if you're batting down four passes to boot, you're doing something right. In Bruce Gaston, Purdue still has an experienced play-maker in the middle, but Gaston was always a complement to Short; now he's the main man.

As a linebackers guy, Hudson probably can't be incredibly pleased with what he inherited there. Will Lucas is certainly serviceable on the weakside, but the depth is questionable at best, and last year's linebacking corps was in no way impressive against either the run or the pass. And the five returnees who saw the field last year combined for a single sack.

Only six players defensed more passes than Josh Johnson's 19 last year; the corner threw in three tackles for loss and three forced fumbles in one of the most statistically impressive cornerback performances in the country last year. He was small but feisty, and he was one of the primary reasons why Purdue's overall Passing S&P+ ranking (51st) was decent despite a minimal pass rush. He's gone, but just about everybody else returns in 2013. Frankie Williams is pretty intriguing, having defensed 11 passes as a freshman, and Antoine Lewis defensed four in minimal playing time. Plus, Landon Feichter is a nice back-line defender, even if he was a bit lucky with the picks last year (typically, you intercept one pass for every four passes broken up). There are ball skills to go around in this secondary despite Johnson's departure; it is easily the least-worrisome unit on this defense in 2013.

Hazell certainly inherited a potentially favorable situation at Kent State. He inherited Dri Archer and Trayion Durham, and he inherited a mostly competent defense as well. But in the four years preceding Hazell's arrival in Kent, the Golden Flashes ranked 98th, 119th, 77th, and 101st in Special Teams F/+. When you're a constant underdog, stinking on special teams is a serious missed opportunity. In Hazell's first season, Kent State improved to 52nd; in 2012, the Golden Flashes were second. They derived an extreme field position and points advantage from the special teams department; in Hunt, Hazell does have an Archer-esque kick return threat (though Raheem Mostert might be even better in that role), but otherwise special teams were mostly lacking last fall, especially in terms of kickoffs and coverage. Expect improvement, but probably not too much improvement, in Year 1.

In terms of overall quality, Hazell's first Purdue team will probably be comparable to Jerry Kill's third in Minnesota. But wow, what a difference a schedule makes. Whereas Minnesota could start the season 5-0 with a Top 60-70 squad, Purdue could start 1-7 with a Top 40-50 squad. By the time Ohio State comes to town on November 2, the Boilermakers will have already hosted two projected top-25 teams (Notre Dame, Nebraska) and visited three top-30 teams on the road (Cincinnati, Wisconsin, Michigan State). As with last season, there are wins to be found in November (Iowa, Illinois, at Indiana), but if Purdue is going to reach a bowl, it has to figure out a way to score at least one upset, possibly two (depending on how good Northern Illinois is). That might be a lot to ask.

In Darrell Hazell, Purdue made an incredibly safe hire. Lucky or not, Hazell oversaw a miracle run in 2012, and he's got all the midwestern ties you could possibly want. But is Purdue squad is probably flawed in too many damning ways to survive this schedule, and we probably won't learn a lot about Hazell's potential until 2014.

But seriously, give Akeem Hunt the damn ball.

2013 Big Ten football previews: Advanced profiles of each team, one by one