The Gamecock star has apparently been in contact with the rapper-turned-agent, which was briefly a cause for mild concern for South Carolina fans.

Update: As expected, South Carolina finds no evidence that anything impermissible happened:

Was forwarded South Carolina memo re: Clowney and Jay-Z. pic.twitter.com/3MCYffJbYU

South Carolina Gamecocks defensive end Jadeveon Clowney has reportedly been in contact with Jay Z, who just so happens to have started a sports agency and wants to represent NFL players. This has understandably drawn concern from the university, which is looking into the matter.

More: For more on the Gamecocks, check out Garnet and Black Attack

I mean, it makes sense. Jay Z is trying to build a high-profile stable of athletes for Roc Nation, and Clowney is practically a lock to be taken first overall in the 2014 NFL Draft. He's a huge name that should get a big contract and endorsements. For Clowney, it has to be a crazy feeling that one of the best rappers of all time (not ranking them because I don't want to spend the rest of my life arguing) wants to be his agent (probably).

One would think that would be a difficult thing to turn down, and he seems to think it's pretty great: 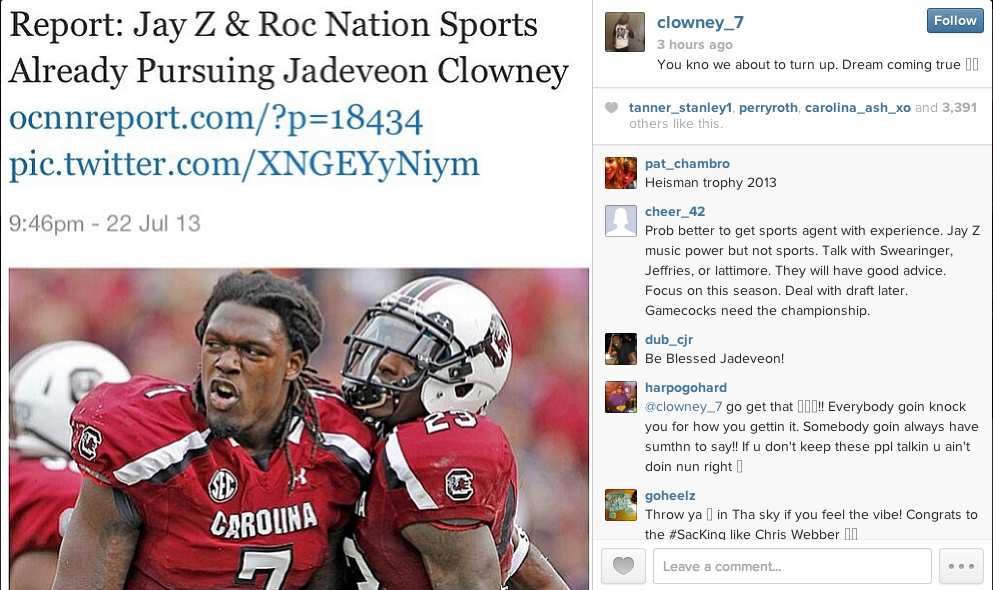 Let's set aside the fact that most NCAA rules are dumb. The rules are the rules, and everybody knows that signing with or agreeing to sign with an agent while you're still playing college ball is a huge no-no. But at this point, there's no evidence Clowney did anything wrong.

And because this is a Jadeveon Clowney article, fine, here's that GIF you were planning on googling:

• Florida player shouldn’t have been arrested for barking at dog, says sheriff