Yes, this is what we want football to be

Almost a year ago, Nick Saban launched a debate on the future of college football. Despite there being no known evidence that up-tempo offenses are bad for players, we're all still talking about it.

Share All sharing options for: Yes, this is what we want football to be

This is a story about football, so let me tell you about the times I've set people on fire in the name of winning.

I did it once on accident; backing into a corner, I fell into a camper with his sniper rifle equipped. Both of us were blind, scared, and suddenly thrown into a very small space with an amount of weaponry that would embarrass the most depraved of arms dealers. Naturally, it ended with knives, the ringing sound of a few accidentally thrown flashbangs, and after some fumbling, the flamethrower. It killed both of us. It always did.

I've done it deliberately, too. In Call of Duty it was almost always a panic move, but in Team Fortress 2? That was the intent, the main idea, the thesis of being a Pyro. You were there to run around in a rubber suit, your eyes hidden behind a dead, comically blank mask, and set people on fire. There is no real strategy to TF2, and never will be, since the idea is to create a battle where everyone is equally crippled by some weakness, and surviving the chaos is the best you can really hope for in the long run.

Those are two very different us vs. them games involving teamwork, a set series of rules, and problem-solving within a confined set of rules, limitations, and sets. I like a lot of us v. them games on various platforms, but the best one by far is football. It's played live, and also in a wide array of possible variations.

Do we want football to be a continuous game?

That's Alabama coach Nick Saban, who has never played a video game in his life, at SEC Media Days in 2013. Saban, more than anyone else, seems to just want to know what problem he has to solve, what answer he has to offer to no-huddle offenses, and whether he's going to get to substitute in certain situations. His issue is efficiency, and adjusting to a new strategy, because he is the coach, and more importantly one that specializes in defense.

He seemed to be saying something like this: If this is what we want to do, tell me we're doing it this way so I can figure out a way to put it in a sleeper hold for four quarters until it loses consciousness.

More: Mike Leach thinks this is ridiculous How can SEC football get any slower?

For a detail monster like Saban, that will mean adjusting conditioning, creating new packages, altering portions of practice, some new review of film, and perhaps changing the kind of shoelaces his players wear.

That last part is not a joke. Nick Saban thinks about those things because he has a button on his door to save him seconds and eats the same thing for lunch every day to save nanoseconds of thought-energy. It's not the way he'd do it, but Nick Saban makes $4 million a year to solve game problems. He'll adjust. 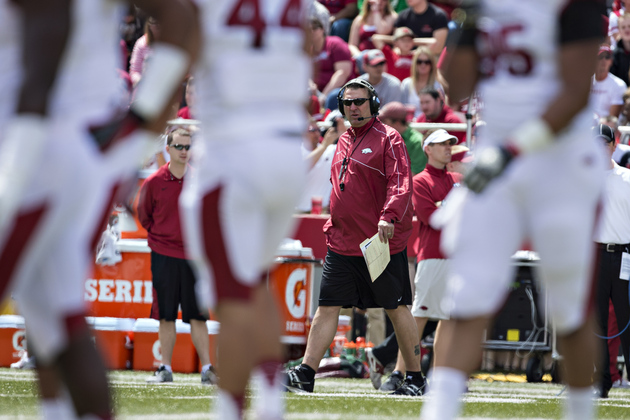 Arkansas coach Bret Bielema's opposition to teams speeding up the pace and short-circuiting laggardly defenses is a different kind of protest. First, Bielema clearly wants his steak, potatoes, and canned beer on the table at 6 p.m., and some Big Bang Theory on the TV at 8 p.m. because this is America, and we have traditions. There are fullbacks in the backfield, the third wide receiver is sitting on the bench where he should be, and when Bret gets enough money in the bank he's getting a Camaro, not some pamby-ass Mercedes, because these colors do not run.

Yeah, we wanted to play a little bit of normal American football. We wanted to line up with a tight end and a couple wideouts, a tailback, and a fullback, see what we can do.

Bielema went on to passionately defend his belief that yes, there should be rules to slow down the game because player safety in the no-huddle was a concern.

He had no numbers to back this up, which puts him in good company. No one has those numbers, or at least does not have them yet. A very simple comparison of numbers from the fastest and slowest teams in college football suggests slower teams get hurt more often than teams that run high-tempo offenses.

He had no numbers to back this up, which puts him in good company.

That only suggests that being slow is bad for you. It says nothing about causation. Perhaps the teams that run the slowest-paced attacks in college football do so because of inexperience, another factor behind a higher injury rate. Teams may also try to do less on offense because injuries have a tendency to snowball, especially on the offensive line, where a lack of coordination between replacement parts gets running backs, quarterbacks, fullbacks, and fellow linemen injured.*

*Watch USC 2012 if you want an example of how one or two injuries along an offensive line can devastate an entire offense's effectiveness and spread from one position to another.

Without real evidence behind a claim of player safety as motivation for slowing down no-huddle offenses, you're left with one reason to dislike them: they are hard to defend and run counter to the old notion of a ponderous game of single-series violences interrupted by 40-second intervals of thought, huddling, and perhaps a quick drying of the quarterback's hands on a towel.

It's dangerous to state any preference online, because you are wrong, and those who are wrong must be utterly destroyed with fire. I'll risk it by saying that in one Us Vs. Them format, I will always choose the more chaotic, less orderly, and more aggressive version of that particular game. I'll take the guns-forward philosophy of Total Football in soccer, Team Fortress 2 and the Grand Theft Auto series for my video game preferences, Hunter S. Thompson and other people who hated editing over the Jane Austens of the world, and a no-huddle spread that attacks for 60 horrible minutes over slugball clock-control any and every day of my life.

That's not to say you can't appreciate Jane Austen football, or catenaccio, or the extremely conventional and wildly successful structures of a game like Call of Duty. They all work even if you hate them because they are rigid and deeply stratified and reward conservative, disciplined behavior with measured, consistent payoffs. They are also incredibly hard to do and require a hardass' attention to detail and an engineer's meticulous attention to quality control at every step.

That's why being overly critical of someone like Bielema for invoking safety in hinting at a rule changes regarding the no-huddle is fine. If he doesn't have the evidence, there is no reason any rules committee in football should consider changing substitution or rules as they stand. Get numbers and make a case, or stop invoking player safety in the name of limiting something you simply do not happen to like.

Yet you can't mock Bielema or Saban or Kevin Sumlin, for that matter, for having preferences. One of the great geekeries in football is its basic challenge: to take a certain number of variables, give them limitations and rights and rules, and then figure out how you can push them forward or backward across 100 yards of lined turf. There are 2,340 ways to line up on defense in the nickel formation alone, and that's with some pretty strict rules put in place to simplify the math.

Preferences matched with skill set make football so interesting. You can run the flexbone or the 4-2-5 or whatever evil Chip Kelly left in a lead-lined box in Oregon or the 3-3-5 or the 3-4 or the air raid or the pistol, and it's all still football, a long series of moves and countermoves made on the fly against live opponents.

In video game terms, you might camp in the corner with the sniper rifle, or you might barrel into a hostile crowd with a blazing flamethrower and all caution thrown to the wind. When those opposites meet, things blow up in unpredictable and messy fashion, and that's where some of the game's most incredible moments are spawned. That's how you get Boise State versus Oklahoma, or Alabama vs. Texas A&M, or any other compelling game of complete opposites.

It would be an easier game for some if college football were more homogenous by rule. It would also be a poorer one.