Alabama freshman Dee Liner did something that is far from unprecedented among college athletes, but also something that isn't a good idea -- he posted a photo online of himself holding a whole lot of money.

This sort of thing is problematic because of what it leads people to assume. Liner is free to hold however much money he wants because it doesn't necessarily mean a damn thing, but it also won't halt inescapable speculation about where that cash came from. The elite defensive line prospect in the 2013 class reneged on his commitment to Auburn in January and eventually decided to sign with the Crimson Tide. 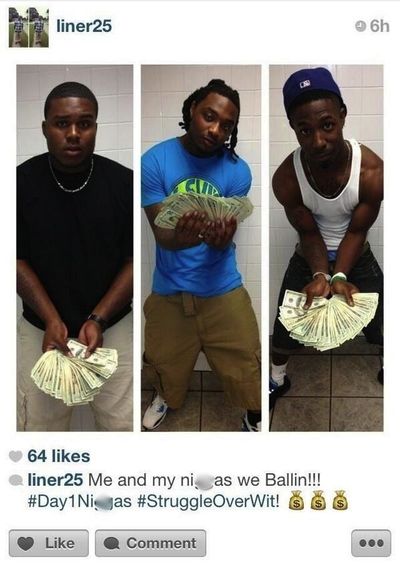 (Liner is on the left. A hat tip to the Atlanta Journal-Constitution's Michael Carvell for the screencap.)

Alabama was immediately charged with implied impropriety by rival fans because that's what always happens: That's what happened to Clemson in Mike Bellamy's case and it's what happened to Ole Miss in Laquon Treadwell's case. The photo proves nothing, of course, but now that one guy on the message board who knows a guy who heard from another guy about shenanigans going on is absolutely certain this is proof of NCAA violations.

Liner eventually deleted the photo, though he did offer an indirect response on Twitter regarding the whole kerfuffle.

Don't judge me when u have no clue what I have been through!!!

He also mentioned the fact that he has "lots of money." Resume accusations of rules violations!