2013 UCF football's 10 things to know: Can the Knights find consistency in the AAC?

No, UCF is not taking on a massive upgrade in its new conference. Still, it's a sign of accomplishment that the Knights are already one of the more stable programs in the American. The question for 2013 is whether they can avoid a bit of a defensive step backwards after the loss of some key pieces.

Share All sharing options for: 2013 UCF football's 10 things to know: Can the Knights find consistency in the AAC?

1. In the American, only Cincinnati and Louisville were better

It isn't very pretty. The school colors are basically black, white, and drab. The team plays in a stadium that is both a) in Orlando and b) impressive but sterile in a hasn't-been-broken-in-yet kind of way. The offense has become consistently decent, the defense consistently slightly-better-than-decent. Recruiting is neither amazing nor terrible, really. And the coach, most known for fudging a résumé, has basically figured out how to win a lot of games by being reasonably good at a lot of things. No innovation, no high-flying offense, no experimental defense, just decent, athletic, hard-hitting football that has, with some setbacks, trended upward for a while now.

Lord knows it isn't very pretty. But it is effective, and it got UCF the conference upgrade folks had been predicting for a while.

There were some peaks and valleys along the way -- holding Ball State to 288 yards and Marshall to 364 yards in 98 plays is a peak, allowing 359 to Southern Miss and 599 to UAB is quite a valley -- but for the most part UCF's defense was consistently solid last season, better than many but not elite by any means. The offense, meanwhile, was decent over the first half of the season, and quite a bit better after some shuffling. After seven games O'Leary juggled some pieces around on the offensive line, and the payoff was pretty clear.

Tulsa's solid defense was able to get a nice read on the Knights, but UCF virtually dominated every other defense on the schedule late in the season, at times with the run, the pass, or both.

That's encouraging considering the pieces that return. Running back Latavius Murray is now an Oakland Raider, but the Knights return a steady quarterback, a potential stud running back (with "potential" being the key word), four to six strong receivers, and a line that should still be at least decent. Really, this year's questions could come on defense. O'Leary is a good defensive coach, and UCF has not ranked worse than 53rd in Def. F/+ in the F/+ era (2007-12 for offensive and defensive data), but the Knights could sink at least a bit with most of last year's pass rushers now gone. 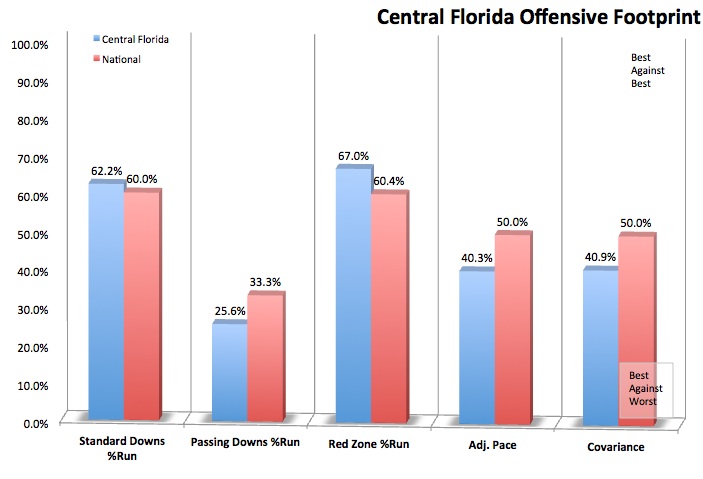 Latavius Murray was one of college football's more underrated backs last season. Miami transfer Storm Johnson was expected by some to (sorry) storm away with the starting job, but while Johnson almost certainly had more in the moves and highlights department, Murray was just better. He missed a few early games and faded late in the season, but he was incredible in the middle, rushing 85 times for 620 yards and eight touchdowns in a four game span from Memphis to UTEP. He was one of the more reliable pass-catching backs in college football, and he had better explosiveness than one would expect from a 6'3, 230-pounder.

UCF indeed missed Murray at the beginning of the season, but Johnson and, to a lesser extent, Brynn Harvey, each had their moments. UCF attempted balance on standard downs, and it worked reasonably well.

But the UCF offense seemed to get better and more efficient when it fell behind schedule. Blake Bortles' overall passing numbers were only decent -- 6.9 yards per attempt (including sacks), No. 44 ranking in Passing S&P+ -- but your numbers are going to be weighed down when you are throwing a disproportionately high amount of time on passing downs, and that's what UCF asked him to do in 2012. He got sacked quite a bit because of this, but he was quite efficient at passing to the chains on second- or third-and-long. And he was only a sophomore. This is a very good thing, though you still want him facing the smallest possible number of passing downs.

The offense definitely ticked up a few notches after O'Leary's midseason shuffling on the line. Basically, the changes consisted of moving Jordan McCray from right guard to left guard, moving Justin McCray from right tackle to right guard, and starting Phil Smith at right tackle. Smith is gone, as is all-conference center Jordan Rae, but between the McCray brothers and left tackle Torrian Wilson, UCF still has the makings of a decent line. Now Storm Johnson just has to take advantage of it. A Miami transfer, Johnson has all the explosiveness and moves you would want from the running back position; Murray overtook him, however, because of general consistency and the ability to move forward. Johnson is an incredible-looking specimen, but he could occasionally get in trouble dancing around or reversing field. Still only a junior, he has incredible upside, and the line could help him reach it.

If Johnson gets hurt, however, it is unclear what will happen at the running back position. With Murray and Brynn Harvey gone, the next most experienced back had 13 carries last year. Freshmen Will Stanback and Micah Reed have apparently both impressed in fall camp, but they are still freshmen; counting on those is often foolish.

Bortles' pass distribution was interesting -- J.J. Worton, Quincy McDuffie or perhaps a tight end or a running back on standard downs, then Rannell Hall, Jeff Godfrey, and Breshad Perriman on passing downs. Regardless of where he's looking, though, a majority of his targets return. And in Hall and Perriman, he has a couple of potentially explosive outlets to find on whichever downs he chooses. UCF enters the American with one of the best quarterbacks and groups of receivers in the conference. 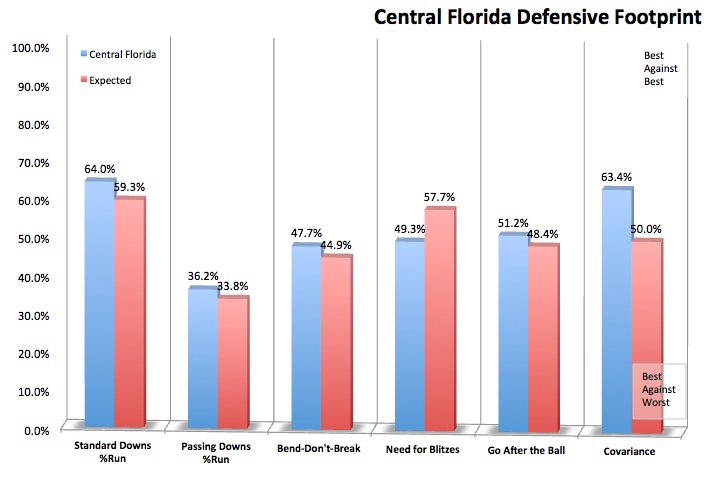 I was a bit unfair to the UCF defense up top. No, the O'Leary D isn't "experimental," but the Knights can typically get after the quarterback. And sacks are fun. Between a solid pass rush and a fine secondary, the UCF pass defense was above average last fall.

It will be interesting to see how this changes in 2013. Sophomore Thomas Niles, a small, quick tackle, is now an end, which could help in holding up to run blocking. But three ends who combined for 12.5 sacks are all gone. O'Leary doesn't tend to substitute very much -- only six linemen and four linebackers logged any major stats -- which means we don't know much about replacements. It does appear that sophomores Niles and Deion Green, who combined for nine sacks, could keep up the pass rushing prowess; but Niles' move means there's basically no experience at tackle after senior E.J. Dunston. UCF will certainly have size with players like Western Michigan transfer Demetris Anderson and redshirt freshman Chester Brown, but size doesn't equal production. If the pass rush is decent but regresses a smidge, and the tackles don't do any better, that's still a net loss. Again, freshmen appear to be making waves (especially Coke machine Jason Rae, younger brother of the former UCF center), but you don't want to have to count on that.

7. Stocked up the middle

UCF has turnover to deal with, but in E.J. Dunston, middle linebacker Terrance Plummer, and strong safety Clayton Geathers, there do appear to be some play-makers in the middle of the field. Plummer was a one-man Stuff Rate last year, and while his counterparts on the outside are changing (2012 backup Troy Gray looks solid, and who the hell knows about anybody else), he will continue to do his thing. Meanwhile, Geathers is almost the size of an O'Leary outside linebacker, but he proved capable of making plays both near the line of scrimmage and far away from it.

In Geathers, corner-turned-safety Brandon Alexander, and to a lesser extent, corner Jordan Ozerities, UCF has some experience in the secondary. But the experience doesn't go too far beyond those three players; on paper, UCF has recruited very well in the secondary of late, but the Knights will find out first-hand how well they've done, as there will be almost no choice but to break in some freshmen and redshirt freshmen. Jeremy Davis, very nearly a four-star recruit, finished the spring as a first-string cornerback, and he is continuing to take a challenge from Jacoby Glenn, true freshman Shaquill Griffin, and others.

Again, the downside to playing with an intentionally small bench is that you end up with a lot of unknown quantities in the offseason. If Davis, Glenn, and other youngsters are stable and reasonably consistent, UCF's defense should once again find itself in the defensive top 50. But if not, the Knights could bleed over onto the wrong side of the top 50 again.

9. McDuffie will be missed

Quincy McDuffie the receiver was replaceable. UCF has a lot of potentially prolific targets. But the Knights might NOT have a player capable of the type of kick returns McDuffie managed in 2012. McDuffie was No. 1 in the country, averaging more than 34 yards per kick return and returning kicks for scores versus East Carolina (once) and Marshall (twice). Opponents steered clear of him frequently, but when they didn't, he often made them pay. He was a major reason why UCF was a top-15 team in terms of Field Position Advantage and top-20 in terms of overall special teams despite sketchy punting. 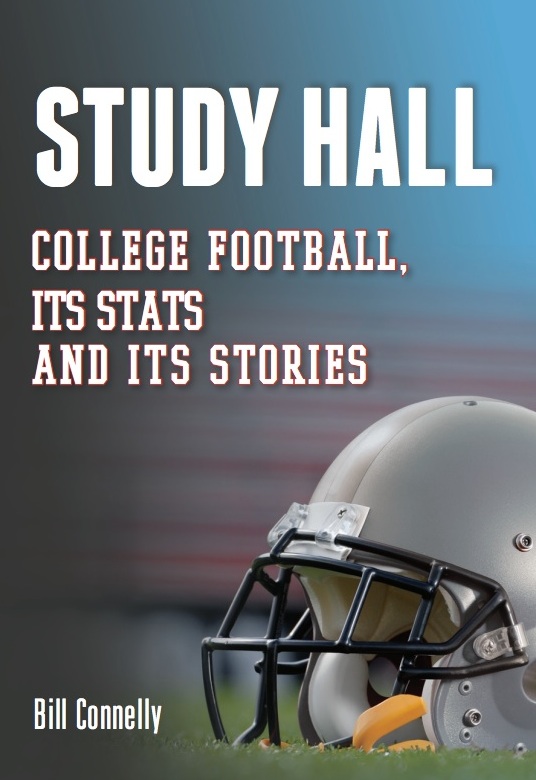 Bill Connelly's first book is now for sale at Amazon and Createspace.

One has to respect ambitious non-conference scheduling. The jump from Conference USA to the AAC will result in a little less dead weight on the schedule, but UCF might take that as a trade-off for losing Tulsa. But Penn State (in Happy Valley) and South Carolina (at home) await the Knights before their first official AAC game.

Actually, including the trip to Louisville, it would take a pretty substantial upset, one way or the other, for UCF to start anything other than 3-3 this season. There are three pretty bad opponents early on (Akron, FIU, and Memphis, though I do think Memphis will be quite a bit saltier this year) and three good to very good ones. The real work, then, starts in late October. If UCF is merely a top-50 or top-60 team, there could be as many as six tossups in the final six games. And with question marks on defense and, potentially, at running back and offensive line, one could certainly see the Knights taking a bit of a step backwards this year. But if the defense holds steady, Storm Johnson stays healthy, and UCF once again pops into the top 30 or 40, suddenly it isn't impossible to see the Knights finishing the season with a long winning streak. (Avoiding Cincinnati helps in that regard.)

Regardless, UCF enters a better conference with as many bona fides, and as bright a future, as just about anybody in the conference. That's a good place to be, even if there is another every-other-year drop-off in Orlando this fall.

•Will anything come of the Johnny Manziel autographs scandal?