Do not attempt to help women enjoy football

There are no football ladies or football men, only football fans.

Share All sharing options for: Do not attempt to help women enjoy football 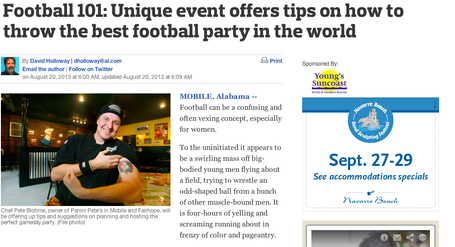 Hi. Don't ever try to write a football article explaining football to women. If they're football fans, they know about football. They watch it, too. This is like an article trying to explain Downton Abbey to men, as if we didn't CRY LIKE A BUS FULL OF SCARED TODDLERS starting somewhere in the middle of season three. Oh, I use Secret deodorant, and have for years. This is a safe place, and we should share those things regardless of gender.

The point is that football is kinetic violence, and that works for people, or it doesn't. In fact, the most violent football fans I have ever met were women. My wife nearly got kicked out of Vanderbilt for profanity during a game against Florida. While she was sitting in the Florida section, surrounded by Florida fans. A mother of two next to me at LSU vs. Auburn told her son, "If he ain't wearin' purple 'n gold, I hope he gets sent to the hospital. And that's how we do it." She said this to her son, who was around 12 years old and standing horrified next to her. Football fans in general scare me a little. She scared me a lot.

And yes: If you want to get unbearably pedantic, women are less likely to be football fans relative to the rest of the population. But the assumption here that annoys the hell out of me is that women have some different kind of needs as football fans relative to the general population, i.e. that they would rather exchange dip recipes than read about the creep of the pistol formation into mainstream football, or ponder tablecloth/napkin combinations. It assumes a lot of things, the most noxious being the idea that men don't like making dip, or that it's a woman's job to be interested in the decor, not the game itself.

They might actually prefer this, for all I know. I have no idea. That's a generalization about women, and I'm a man. The things I know about my own gender in general could fit into a dip cup, and the things I know about being a woman amount to even less. I'm making no guesses about either gender. I do know football fans, and they hate this shit, male, female, or otherwise.

P.S. This was written for a paper in Alabama, a state where every woman and man alike know Bama needed to run the damn ball more against A&M last year. Zone right out of an unbalanced two tight set ain't got no gender, neither.