Oregon Ducks defensive back Terrance Mitchell became Saturday's second player to be ejected for "targeting." Unlike Texas A&M's Deshazor Everett, however, this penalty was very much warranted:

Mitchell led with his head, crushing Nicholls State quarterback Beaux Hebert (the most Louisiana name ever, for the record) while was sliding. A look at the still frame right before he made contact shows exactly what they mean by targeting. 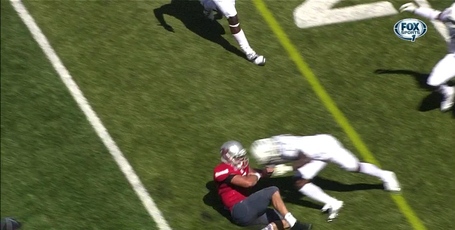 The Ducks led 24-0 after the first quarter so this won't really affect the game, but woof ... you probably shouldn't be hitting guys like that.

• Catch up on college football’s opening night | And Friday, too