Johnny Manziel vs. the NCAA: What we do and do not know at this point

Texas A&M is not without its Heisman Trophy-winning quarterback just yet, but buckle up for a long ordeal. Ongoing Manziel-NCAA coverage here.

Share All sharing options for: Johnny Manziel vs. the NCAA: What we do and do not know at this point

Welcome, friend, to the first actual Johnny Manziel controversy. Did it feel like your entire offseason was spent preparing your Manziel-reaction muscles for this? You've made it.

In one line: ESPN's Darren Rovell is reporting the NCAA is investigating whether Manziel took money for autographs. This raises issues, to say the least. Let us work through them, as best we can.

No. He'll be at practice when Texas A&M opens camp Monday, but he won't be available to the media, continuing 11 or so months of off-and-on availability.

What did Johnny Manziel do?

He allegedly signed a bunch of autographs in a Miami apartment.

Okay. What is Johnny Manziel accused of doing?

Though the NCAA has not confirmed, Rovell reports Manziel was allegedly "paid a five-figure flat fee" for those autographs. If (A) that is true and (B) the NCAA can prove it, Manziel will not play football for a long time.

Will Johnny Manziel be suspended?

I doubt it. If the information ESPN reports is the extent of the NCAA's investigation so far, the governing body still has a lot of work to do to prove a rule was broken, as acknowledged by Rovell:

Word of caution on NCAA investigation on Manziel: They still have to find compelling evidence to suspend him. Might not be easy.

The NCAA will likely gain (or has gained) access to Manziel's bank records and the accounts of his already-wealthy parents. If it can't find a deposit corresponding to the alleged fee, it would take something like surprise video evidence to prove the charge. But if there's a convincing paper trail, as there was in the case of Georgia receiver A.J. Green, then we have something.

So this is Cam Newton all over again?

Sure! We've got a Paul Manziel instead of a Cecil Newton, and the alleged potential deed would've taken place after winning a Heisman, not before.

But it'll drag on all season long, and a general presumption of guilt could follow Manziel even more closely than it did Newton, due to Manziel's adventurous offseasons. Even if the NCAA announces Monday afternoon that all's well. Don't hold your breath there.

I would be stunned if the NCAA finishes investigation by Sept. 14. Or Dec. 14. Unless there's just absolutely nothing there

So what evidence is there?

Two anonymous sources, neither of which saw the alleged transaction. ESPN is not reporting whether the two* have spoken to the NCAA.

According to those sources, Manziel met an "autograph broker" named Drew Tieman upon arriving at a Miami airport for the BCS National Championship. Manziel was indeed in Miami ...

"Our crack team of GIFologists uncovered this damning animated GIF of Johnny Manziel receiving improper benefits for his autograph."

Rovell reports "the amount of Manziel product that flooded the memorabilia market overall following the BCS title game was overwhelming," according to "memorabilia dealers," and that "industry insiders" point to evidence that a large batch of items was signed with the intent to sell. It's not clear if those dealers are the same individuals as the other cited sources.

The story's sourcing must be approached with skepticism, especially since Rovell has been wrong recently, as has Outside the Lines (and there's ESPN's Auburn spice "epidemic").

That's not to say the story is baseless. The existence of a "a single lot of 999 signed Manziel photos numbered sequentially" is unquestionably suspicious. Plus, memorabilia is kind of Rovell's alley. Whether Aggies fans want to hear it or not, there is evidence. Not proof, but evidence.

What else have we heard recently about Johnny Manziel and autographs?

Responding to an email about autograph sales and the Leaf cards, David Batson, director of compliance at Texas A&M University, said: "Other than to charitable and nonprofit fundraisers, Johnny has indicated that he has never knowingly provided an autograph to someone who had indicated a plan to sell his autograph. As for the Leaf Mystery Redemption Cards, Johnny has informed the Athletic Compliance Office that he has not authorized these cards' production or sale; he has not knowingly provided his autograph for use in these cards; and he will not receive any compensation from the sale of these cards. ..."

Johnny signed everything, no matter how much he grumbled and cursed with a pen in his hand. Whenever he'd see his parents, they'd always have a carload of things to autograph. They hated it, and he did too. But they seemed compelled by manners, and obligation, and one autograph didn't seem like that big a deal [...]

The counselor told Johnny to build walls around himself, set boundaries. First, his parents' autographs should be limited to  half an hour a week.

[Months before July], his therapist asked him to make a list of the stressors in his life. Autographs topped the ledger. The solution was simple. Instead of signing everything sent his way, Manziel would dedicate one hour a week to fan mail and autographs. Everything else would go unsigned. In public Manziel would sign for children but steer clear of adults.

Manziel told a story about being duped by an autograph broker in a Dallas airport to Staples, just as he did to Sports Illustrated's Stewart Mandel, two months after January 6:

It seems the Heisman winner's biggest challenge is autograph requests -- he's received several thousand of them since December, either in person or arriving in the mail at his or his parents' house.

In fact, Manziel got a cruel initiation during a layover at the Dallas-Forth Worth airport en route to the Home Depot College Football Awards Show in Orlando. A full-uniformed solider approached him with a "mountain" of helmet decals, telling the player he was stationed overseas and wanted to pass out autographs to the fellow soldiers at his base. Manziel gladly obliged.

The decals wound up affixed to actual helmets being sold on eBay.

Whole lot of autograph talk, especially over the last week.

Will Texas A&M face sanctions for this?

If the NCAA proves both that Manziel took money and that Aggies coaches knowingly played him anyway. But Texas A&M hasn't played any football games this offseason, due to the fact that it is the offseason. So there's nothing to sanction A&M for yet.

Could Texas A&M win a bunch of games without Johnny Manziel?

Just for the sake of argument: certainly. Jake Matthews anchors what should be a very good offensive line, Kevin Sumlin's offense has produced YARDS and POINTS with non-Manziel quarterbacks before, and the toughest non-SEC team A&M faces is SMU.

Just so we know, who are Johnny Manziel's backups?

Next on the depth chart for the beginning of fall camp is believed to be 6'4 junior Matt Joeckel, brother of the No. 2 2013 NFL Draft pick. After him, a whole bunch of four-star freshmen.

What do we know about Drew Tieman?

Autograph guy Tieman was contacted by the NCAA in June of 2013, according to the report. He did not comment to ESPN. 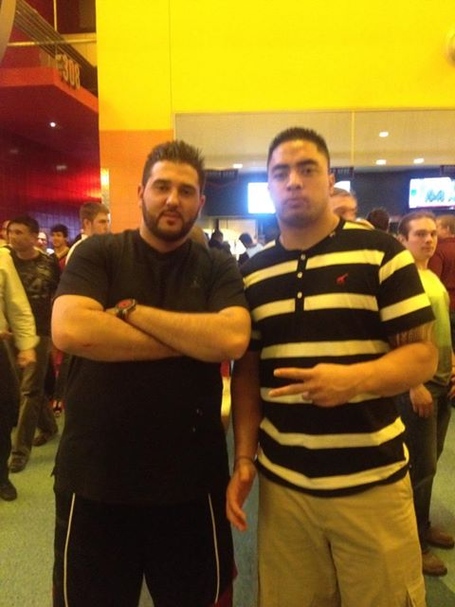 He has been arrested twice for marijuana possession since 2009.

He appears to be a Miami Hurricanes fan. There's a photo of him with Miami coach Al Golden.

Are there conspiracy theories?

The NCAA contacted Tieman in June; the NCAA likely contacted A&M around the same time. Manziel went a month without tweeting from mid-June to mid-July. Sumlin said a couple times in early June that his staff didn't anoint Manziel as A&M's starting quarterback until the end of camp in 2012; weeks later, news broke that Manziel had almost left A&M and that Sumlin had helped Manziel avoid suspension for his 2012 arrest. Damage control has been underway for a couple months now.

Someone pushed for Johnny and his father to complain to Mandel, Thompson, and Staples about ceaseless autograph demand in order to explain away the high number of Manziel-autographed items on the market.

There are probably others, too.

Is this story bigger than Johnny Manziel's eligibility?

If Johnny Manziel got a 5-figure payout, there must be a record of it somewhere, or else he broke federal law.

All transactions of $10,000 or more in the US must be reported for anti-money laundering purposes.

Whoa. But I meant, as far as sports go.

The problem isn't Johnny Manziel, it's the fact the NCAA, CBS, ESPN, aTm, EA Sports, and anyone else but him can make money off his name.

"With a backdrop of increasingly hostile public sentiment against the NCAA and its archaic amateurism policies," the story "shines an even brighter spotlight on the NCAA's system of "amateurism" that is under significant attack both legally and politically," and "if the power schools really are tearing down the current model, stories like Manziel's should at least be in the conversation." Also, um, something about Canada.

Johnny Manziel no longer under whatever that investigation was