From the new ejections rule to Johnny Football, it's time to prepare for another college football season filled with yelling.

In order to pass the time until football starts, we’ve been assaulted with "Urban Meyer enabled a crime spree!," "Johnny Manziel drew the ire of Archie Manning, which is just what that careless bon vivant needs!," and "Bob Stoops says the SEC isn’t that great; let’s fight about Iowa State vs. Kentucky!"

In other words, this offseason has made all of us dumber.

Unfortunately, just as players are currently sharpening their skills and running sprints in order to arrive at the start of the season in playing shape, the more cynical members of the commentariat have been using this summer as practice to unleash a torrent of dumb memes as soon as the season starts.

Without a game having been played, here is a collection of story topics that you can safely avoid once the bullets start flying in September:

1a. Johnny Manziel’s offseason has caught up with him!

Assuming for the sake of argument that the NCAA either lacks evidence to suspend Manziel or the investigation does not conclude by the end of the season ...

Manziel accounted for 5,116 yards and 47 touchdowns last year as a redshirt freshman. In other words, there is no place for him to go but down. Nevertheless, you will no doubt see and hear a perfect illustration of the maxim that correlation is not the same thing as causation when Manziel struggles at any point this year and commenters try to link his offseason to his play on the field.

Manziel struggled in 2012 against Florida and LSU, but because he had not spent the entire offseason under the microscope of a collection of Victorian prudes, there was no narrative to push. This fall, there will be an agenda the moment A&M goes three-and-out for the first time. After all, nothing makes an irrelevant story seem newsworthy than trying to link it to actual events.

1b. The NCAA sends a strong message!

Assuming for the sake of argument that the NCAA does indeed suspend Manziel ... Just imagine the torrent of "Mark Emmert means business!" pieces that establishment writers will pen in the event that the reigning Heisman winner is sidelined.

After an offseason in which the NCAA punted on sanctioning Oregon and a good chunk of its investigative staff resigned in the aftermath of mistakes in the Miami investigation, a decision to suspend Manziel would be best seen as the last spasm of a beaten institution. The Battle of the Bulge for the NCAA, if you will.

However, it's not hard to imagine the responses of writers who: (1) fear change; and (2) are always game for bashing young people for getting some of the revenue that they generate. "See, the NCAA still has teeth! They're in control here! I love authority!" In other words...

This will happen as soon as Oregon loses a game. Will anyone remember that Chip Kelly lost his first game at Oregon by 11 points to Boise State? Or that the Ducks lost twice that year? Or that Kelly got stuck with a ridiculous can't-win-the-big-one tag?

3. That loss spells the end for Lane Kiffin!

Like any living, breathing Southerner, I look forward to Lane Kiffin getting his comeuppance. One does not have to be a Tennessee fan to find the way Kiffin handled himself in his year in Knoxville to be beyond the pale, even in a vagabond profession such as college coaching. However, the Kiffin Death Watch this year is likely to be interminable.

USC AD Pat Haden is far too smart to think that way.

Kiffin is dealing with massive scholarship restrictions, thanks to a bygone era in which the NCAA enforced its recruiting regulations. (Hi there, Eugene!) He has recruited about as well as a coach can under the circumstances. USC was a massive disappointment last year, one that the odd writer might have seen coming, but it had been a pleasant surprise in 2011. Kiffin deserves to be feeling heat, but the degree to which his posterior is roasting is disproportionate to his record at USC and is no doubt exacerbated by his personality.

In any event, every win and loss for the Trojans this fall is going to be seen as a referendum on Kiffin. "USC lost to Arizona State, so Kiffin is gone!" "USC beat Notre Dame, so Kiffin stays!" "Kiffin needs 10 wins to stay and he only got nine, so fire his ass now!"

Athletic director Pat Haden is far too smart to think that way. Unless doctors have lopped off the frontal lobe of Haden’s Rhodes Scholar brain, he will take a broad look at Kiffin at the end of the year, weighing how the Trojans did in the aggregate – were they unlucky to lose three? Were they lucky to win 10? – and then making a decision. Putting the decision down to the record without looking at context or (even worse) making the decision based on one game is a fool’s errand, which is exactly why we can expect a lot of that sort of reasoning.

4. Ohio State's schedule isn't as bad as we thought!

One of the largest, most passionate fan bases in college football has spent the entire offseason worrying about and/or defending a schedule that might not have a ranked opponent until the finale in Ann Arbor. You can be certain that the moment that Cal or Iowa wins a game, there will be people in the media looking to serve up some red meat for that fan base. And the fact that certain clownish studio personalities will overstate the weakness of Ohio State's schedule will just make the debate even more tiresome.

5. Brady Hoke/Hugh Freeze can recruit, but he can’t coach!

Remember when Mack Brown couldn’t beat Bob Stoops? No, not the most recent bad stretch. I’m thinking about the first time. You know, the period in the late '90s and early '00s when Mack was first bringing Texas back to prominence. He was recruiting extremely well and winning more games that the Horns had won since the first six years of the Fred Akers era, only Bob Stoops was doing just a little better in Norman and, more importantly, at the Texas State Fair every October. You pair excellent recruiting classes with seasons where a team is good enough to be in contention, but not good enough to beat their chief rival, and you have a perfect storm.

Leaving aside the fact that recruiting is the most important function for a college coach, the dumb part of the criticism of Brown was the implicit assumption that recruiting results should be visible immediately. It’s true that the occasional freshman can make a big impact on the field, but for the most part, a great recruiting class signed in February 2002 will generally only show its full value in 2005 when the recruits in the class are seniors and redshirt juniors. That was exactly how events played out for Texas.

You can just see the same sort of story coming for Brady Hoke, with the one exception being that Hoke’s likeability will reduce the degree of criticism. Michigan’s 2010 and 2011 classes – the classes that produced Michigan’s current third- and four-year players – were well below the program’s historical norms (and that’s before you get to the massive attrition that the 2010 class has experienced, most of which predates Hoke’s arrival). Thus, Michigan is likely to be talented, but inexperienced this year. The rational approach to the situation would be to expect that Hoke’s top-notch recruiting will pay dividends in a year or two.

Hugh Freeze is going to be in the same boat. His predecessor was not known for his skill in recruiting, so Ole Miss is going to be in a position where the younger half of the team is going to be talented, but raw, and the older half is going to be experienced, but collectively a cut below most of their rivals in the SEC West. Many parts of the media will expect Ole Miss’s outstanding 2013 recruiting class to pay dividends too soon. 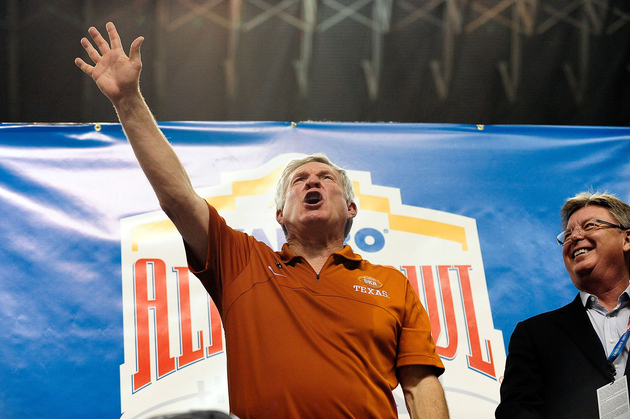 Now that Notre Dame has had a big season, it's time for one of college football's other giants to get some love the moment that something goes right for them in 2013.

Somebody has to win games in the ACC Coastal, right? Why shouldn't it be the team returning 18 starters? Never underestimate the power of nostalgia.

It’s inevitable. A fast-paced team is in contention for the national title and various people who don’t understand the concept of pace will say, "Team X doesn’t have a very high ranking in total defense, and no team can win the national title playing defense at that level."

The problem is that the spread team in question plays at a fast pace, so its defense sees more plays and more possessions than other teams do. On a per-play or per possession basis, the defense is playing perfectly well, but analysts stuck in the 1970s don’t get that point.

9. They played an SEC schedule!

To continue with a topic I covered last week, there is a lot of variance within the broad category of "SEC schedule."

Georgia made it to the SEC Championship Game in 2012 having played a grand total of two ranked opponents. (This came on the heels of the Dawgs making it to Atlanta in 2011 without having beaten a single SEC opponent that finished with a winning conference record.) Likewise, Alabama made the title game after having beaten only one SEC opponent with a winning conference record.

The same point applies to Alabama this year, as Bama: (1) draws Tennessee and Kentucky from the East; and (2) does not play a ranked opponent in the non-conference schedule. (Virginia Tech is in the top 25 of only one of the six major previews that are out right now.) The Tide have received a mulligan on home November losses in each of the past two years. If I were confident that voters were making that decision based on Alabama’s overwhelming yardage and scoring stats, then this decision would be totally justifiable. If I were realistic, then I would conclude that voters are giving Bama the benefit of the doubt based on the name of the school and the conference without noticing the Tide’s recent good fortune in avoiding top conference opponents.

Alabama is hardly the only team in the SEC that gets a favorable draw this year. Take a gander at Texas A&M’s schedule. Its non-conference slate is embarrassing, and it draw Missouri and Vandy from the East, with the slightly tougher Commodores coming to College Station.

Alabama-Texas A&M is getting attention as a potential game of the year for a variety of reasons, one of which should be the fact that both teams have clear sailing from that game until dates with LSU in November. The SEC has enough good teams that I should not be able to make that statement about a game that takes place on September 14, but thanks to expansion, the luck of the draw, and uneven quality in the conference, a team can plan an "SEC schedule" and still have relatively few tests.

[Note: South Carolina also gets a favorable draw this year in that it plays Mississippi State and Arkansas from the West, while Florida and Georgia both play LSU. The Gamecocks have a leg up in terms of winning the East, but their non-conference slate has games against North Carolina and Clemson, so for national title purposes, they should end up with a solid strength of schedule.]

10. That ejection decided the game!

There's no doubt that the new targeting rules place refs in the position of having to make oft-subjective, high-impact decisions when deciding whether to toss players. However, the overreaction to the impact of these decisions is inevitable. It's a virtual certainty that at least one coach will blame a loss in part on an ejection, and a media storm will result.