Official NCAA store set up to profit off player names

Share All sharing options for: Official NCAA store set up to profit off player names

It all started when ESPN's Jay Bilas tweeted this out:

Ahh yes, so Johnny Manziel isn't allowed to profit from his name or likeness, but his protectors at the NCAA can funnel player name searches to the appropriate "student-athlete" merchandise. Thank goodness for the pillars of amateurism.

It's not just Manziel though. Here's what happens when you type in "Clowney": 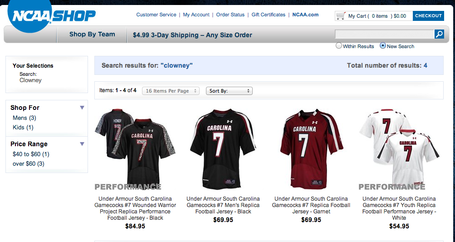 Look up your favorite college football star, and I bet you his jersey is in there. It's not just current players though:

And hey, you search for a player's nickname and it still seems to work!

Like their commercial says, the NCAA likes to think of itself as student-athletes' biggest cheerleader. Thank goodness somebody is looking out for these kids' best interests!

A challenge to you, fair commenter: Try to find the least noteworthy college football player whose name will still bring up the appropriate jersey.

UPDATE: The NCAA has disabled the search function at its online shop.

Johnny Manziel no longer under whatever that investigation was