Texas A&M and Johnny Manziel had one adventurous second half vs. Rice

Johnny Manziel entered the game for Texas A&M after halftime, and then things got weird.

Share All sharing options for: Texas A&M and Johnny Manziel had one adventurous second half vs. Rice

A short story, in six parts.

Texas A&M and Rice play to a 28-21 score in the first half of football while Johnny Manziel stands idly on the sidelines, having been suspended for the first half by the Aggies and the NCAA. 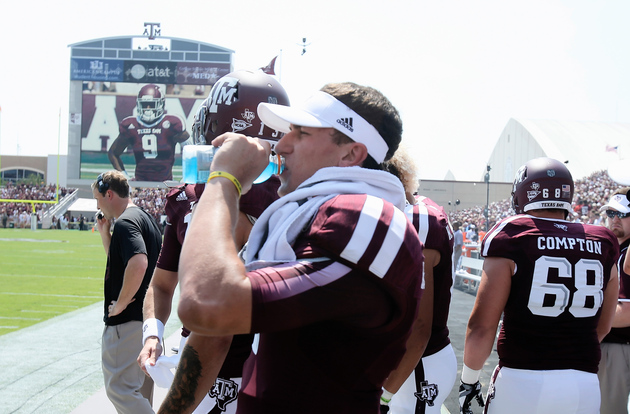 Johnny Manziel enters the football game for the first time this season to riotous applause.

Johnny Manziel, who had been suspended over allegations that he accepted money for signatures, throws for a touchdown and promptly starts making dollar bill gestures. (Yes, he did this last season too. It's still noteworthy.)

There were also autograph gestures, in continued reference to the reason Manziel didn't play the first half.

Johnny Manziel throws for his third touchdown, starts talking to his opponents, gets a flag thrown for his troubles, and is summarily benched by his coach. He finishes with 94 yards passing, 19 rushing, and three touchdowns in about 20 minutes of football.

Rice linebacker Nick Elder doesn't appear in this image, but he does shed further light on Manziel's communications with Owls during the game:

@willyum_jones @espn not to me but maybe to others

Defensive back Daeshon Hall is ejected for fighting, something announcers promptly blame Manziel's earlier penalty for. No, seriously, the announcers did that.

Defensive back Deshazor Everett is ejected for targeting, something announcers promptly blame Manziel's earlier penalty for. No, seriously, the announcers did that.

And with this oil of controversy greasing its gears, the horrible machine of sports outrage ground on ever more.

Texas A&M won, 52-31. Head coach Kevin Sumlin is not happy about all this.