College football's Top 25, reviewed after (most of) Week 1

The new AP Top 25 won't come out until Tuesday, since this is a week with an especially weird schedule, but let's run down what we can run down.

Share All sharing options for: College football's Top 25, reviewed after (most of) Week 1

The Crimson Tide's offensive line was outmatched for most of the night, A.J. McCarron never had his timing down with his receivers, and the offense topped the meager output of Virginia Tech's offense by four yards, 216 to 212. They won by 25 points, 35-10, because even a toddler of an Alabama team is capable of taking off whole fingers if you're dumb enough to stick them through the bars of the crib. And because the Hokies' special teams are now as bad as they once were good.

A serviceable, 40-20 win over Buffalo only highlighted by Urban Meyer going for two after each of their opening touchdowns, because you want to make sure you put some distance between you and a MAC team early. This is not a joke, especially if you are the Iowa Hawkeyes.

Covered the spread against Nicholls State. The spread was 59 points. Gambling is dumb, and flossing is good for you, but which one do you do more often, citizen?

Plays their first game against San Jose State on September 7. Probably in meetings with venture capitalists about some rich person stuff this week.

Lost 38-35 to a raging Clemson team with perhaps the best offense in the history of the school, so yes, let's CRY ON THE RADIO AND DEMAND MARK RICHT GET FIRED.

I don't really know how you score 52 points quietly and without Johnny Manziel for the first half, but I am not Kevin Sumlin and neither are you, and thus do not have the power to make 52 points seem kind of average at this point for the Aggies.

Won 27-10 over North Carolina with a dominant performance by both the offensive and defensive lines. But sure, focus on Jadeveon Clowney getting winded in a game in 95-degree weather in his first game of the season, playing against a no-huddle offense. That seems relevant to what actually happened here.

100 things that will happen this college football season 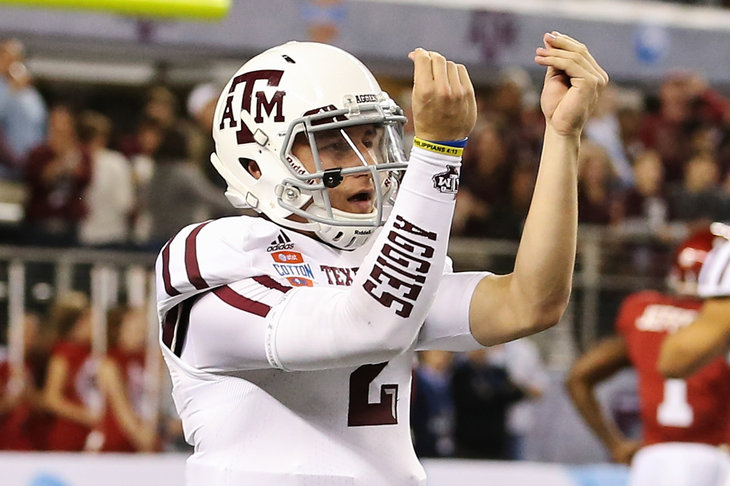 Closed out a free-fire exercise at home 38-35 against Georgia by letting Tajh Boyd throw beautiful passes for TDs. Lane Kiffin once told Boyd, a Tennessee commit, to go elsewhere when he was the coach in Knoxville. This has nothing to do with the game's outcome, but if something's funny once, it's funny every single time.

Plays Ohio on Sunday. Six of their next eight opponents lost this opening weekend, so that crucial strength of schedule for the Cardinals is off to a rip-roaring start already.

A workmanlike 24-6 win over Toledo highlighted by Florida only picking up 10 penalties, or roughly one-10th of their usual total for a game.

Tommy Rees threw for 343 yards and three TDs while throwing zero interceptions in a 28-6 win over Temple, and looked like a very good quarterback. ND also played "Sandstorm" in the stadium, which probably looked hilarious if you imagine grumpy, geriatric season ticket-holders aghast in their windbreakers making grim faces at the devil noise polluting their silent football mausoleum. Also:

Plays Monday against Pitt in the best matchup of the weekend involving "Florida State" and "Pitt."

37-27 over TCU. LSU had 25 first downs against a very good defense, Zach Mettenberger made throws of genuine perfection down the stretch, and the Tigers didn't even totally screw up the one mandatory Les Miles clock paroxysm of the game.

A 21-3 victory over Mississippi State highlighted by an even earlier-than-usual quarterback switch by Mike Gundy from Clint Chelf to J.W. Walsh. (Oklahoma State only recruits players with cowhand names.)

Texas doesn't even get to shine in a 56-7 blowout of New Mexico State, thanks to the Aggies bouncing footballs off their heads.

Shut out ULM 34-0, a difficult feat due to Monroe doing things like playing two quarterbacks at once and coaching every game like they've just been diagnosed with a terminal illness.

Survived the last, desperate attempt by Wyoming's Brett Smith to tie the game, thus only allowing 602 yards and 37 first downs to the Cowboys in a 37-34 victory.

There is not enough room in this space to explain how losing 38-6 to Washington looked so much worse than even the score would indicate. But the short version is this: Boise State is the white car in this video, and UW is the boulder.

As respectable a a loss as you can get, especially when your coach gives up the ball on 4th and 2 with five minutes left and down 10 points. (TCU never got the ball back.) (Punting is an addiction.)

58-20 over Nevada with a furious 41-point onslaught in the second half. Jim Mora likes to accelerate through the casino in the monster truck, because the slot machines make a great noise when you hit them going fast enough.

Prevailed in a ludicrous 44-30 win over Cal, returning two gift-wrapped INTs for touchdowns. Spoiled rich kids get all the nice stuff, man.

Beat UMass 45-0, a total which qualifies as showing restraint when you remember how bad UMass is at tackle football.

A sleepy 30-13 walk-through against Hawaii that did nothing to dispel the notion that coaching is something Lane Kiffin is doing while finishing up his prereqs for dental school.

Lost to FCS Eastern Washington 49-46, but was spared the pain of doing it on EWU's blood-red turf.