After eight wins by FCS teams over FBS teams so far this weekend, is it even worth it to play lower-subdivision teams anymore? Let's look into the question.

Share All sharing options for: FCS football uprising: New record for FBS losses in a week to lower level

Maybe they're not the body-baggers anymore. Maybe they're zombies who are bent on taking over the college football world.

"Body bag games," a phrase coined by the late Cal State Fullerton coach Gene Murphy to describe the big-dollar staged slaughters of college football also-rans, became horror shows for more than a handful of FBS powers in the 2013 opening weekend. It began with Towson's thrashing of Connecticut on Thursday and culminated with the sacking of San Diego State by Eastern Illinois on Saturday night.

FCS vs. FBS in Week 1, by conference 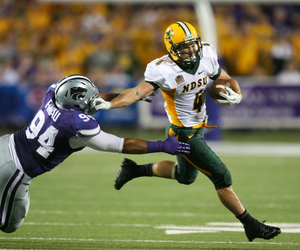 So the visitors not only collected a handsome check just for showing up, they also delighted in the ritual humiliation of their hosts in front of disgusted fans. This included two-time defending FCS champion North Dakota State's takedown of Kansas State on Friday, when the defending Big 12 co-champions unveiled their newly renovated stadium.

But the biggest upset of the weekend belonged to Eastern Washington. Though the Eagles were no slouch - having won the FCS title in 2010, they became just the fourth lower-division team to beat a ranked FBS (or I-A) opponent since Division I split up in 1978. While EWU's 49-46 win over No. 25 Oregon State isn't quite on the scale of Appalachian State's epic shocker over No. 5 Michigan at the Big House in 2007, it did help to illuminate the FCS conundrum facing big-time football programs.

In 2012, there were more FBS-FCS matchups than at any time in history except 1982, and it was part of a continuing trend of increasing inter-subdivision games. There were 31 inter-subdivision games played this weekend, with FCS teams posting an impressive 8-22 record, including a winning record against the AAC (2-1) and a break-even against the Big 12 (2-2). FCS teams' five wins over BCS-conference opponents in the opening weekend are just one shy of the record for the entire season (six, in 1985 and '86).

So for teams in the power conferences, the question must be asked. Are those inter-subdivision games worth it? From the BCS perspective, the answer is still an unequivocal yes. 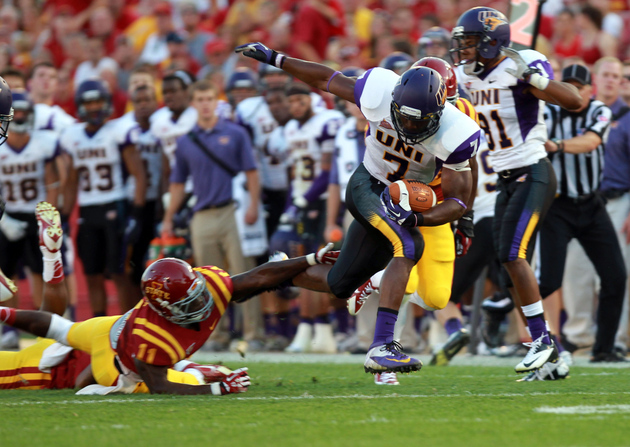 Even with this week's uprising, FCS teams remain the most reliable victory-padding opponents. All but one of the past eight BCS champions (all from the SEC) played at least one FCS team during their title-winning seasons. Even the two ranked teams that lost to FCS opponents during the BCS era bounced back from the humiliation and ended up playing in New Year's Day bowls. The 2007 Michigan team beat Heisman winner Tim Tebow and Florida in the Capital One Bowl, and the 2010 Virginia Tech team lost to Andrew Luck and Stanford in the Orange Bowl.

The BCS computers don't punish a team excessively for scheduling (and even losing) to an FCS opponent. All six computers count and factor games against FCS teams in their respective ratings systems, and three (Sagarin, Massey and Wolfe) rank all Division I teams individually. There is more value in beating a decent FCS team than a bottom-of-the-barrel FBS team.

There are only three FBS teams that have never played (or scheduled) an FCS opponent: USC, UCLA and Notre Dame. And the Big Ten has announced (for now) that its members will no longer play FCS programs after honoring present arrangements, meaning starting in 2015 no FCS team could be on the B1G schedule.

But don't count on the SEC to follow suit or tinker with its steady diet of FCS games. It's good for business, and it's never hurt member schools. Also, SEC teams do their due diligence and rarely schedule any FCS teams that can cause problems, other than the seemingly annual close games against SoCon teams. In the BCS era, the SEC has lost only two games to FCS opponents (Mississippi State in 2004 and Ole Miss in 2010).

Will SEC teams have to adjust to the new realities of the College Football Playoff, due to being next year? Perhaps. But even though the BCS and its associated computer rankings will be rendered obsolete, it's likely the new committee will still follow something like the current formula in determining the four Playoff teams.

So while the FCS success on opening weekend makes for a feel-good story, it'll be largely forgotten by late November when Alabama is putting the hurt on the Chattanooga Mocs. It'll be back to business as usual.