This Week In Schadenfreude: Wisconsin's still trying to kick that field goal

TWIS tracks down the funniest, saddest, most alarming things said on the internet about college football. This week: The entire state of Wisconsin on a manhunt for Pac-12 refs! Bo Pelini swears at things! A guy at Wake Forest is mad! Nebraska fans taunted by squirrels! Future Texas losses apologized for! Is Johnny Football a witch?

Share All sharing options for: This Week In Schadenfreude: Wisconsin's still trying to kick that field goal

What went down at two AM eastern in the WISCONSIN-Arizona State game caused cheese curds to be projected from mouths all across Madison, nearly caused Wisconsin's starting quarterback to haul off and punch a ref…

I thought Stave was about to punch one of those refs.

I would have had a hard time not doing that.

No words. Worse than Packers/Seahawks '12.

Good lord. I've seen it all. I don't get worked up about these games much any more. But I'm shaking. I don't think I've ever seen a hose job that bad. I don't believe it. Un-f---ing-real.

We'll get an apology on Tuesday from the refs. It will be awesome

That was a clusterfuck. A total clusterf---. The word 'clusterf---' was invented for clusterf---s like that.

If this board didn't crash after learning of Jen Bielema's post-game "karma" tweet, it never will.  By the way, how do you literally burn an online forum?

On the UW Scout board they immediately renamed Arizona State "Asterisk State":

They've currently got an 830-comment thread entitled "a worse call than Packers-Seahawks" because every Wisconsin fan is also a Packers fan.

That "karma" tweet generated an avalanche of garbage that probably has Jezebel fanning itself today, but it there was one gem in the dross:

Wisconsin narrowly edges… all 11 other Big Ten teams for the Tears of Unfathomable Sadness. Big Ten!

The only ACC teams to lose this week were Duke, which got blown out by Georgia Tech, and WAKE FOREST, which went down to ULM. I despaired at finding anything remotely angry from either of these fanbases, but Wake comes through. Longtime OC Steed Lobotzke has some enemies:

Time to fire this brutally incompetent coach who has only subsisted on our checks because because he’s related to the head coach and tweets about Jesus on Sunday (links embedded)…. Time to begin relying on the offense to generate points instead of hoping every game that the defense and special teams will score points and defend and kick/defend against field goals and punts! That begins when Steed Lobotzke gets the professional guillotine and goes somewhere else – a nepotism-free job he has to earn based on his merits, not his pathetic LOWF PR – to make friends and preach online on his own time. Certainly he won’t return to coach "offense" at any ACC school after we’re done with his sorry ass.

The fans were frequently booing RE: our "offense's" ∞ three-and-outs

And it had nothing to do with the players.

Pre-emptively, because this happens, I’m so sick of any displeasure shown at performance being tied to something personal or unsupportive of the players. If any of the players, football or basketball, can’t manage to dispatch with the socially kitschy "I’m loyal to my coaches oorah!!!!!" cliche that’s such a beloved social ornament to young kids playing sports and/or can’t get beyond the narcissistic idea that performance-based criticism doesn’t always have to do with them, then whatever. Kids being kids, grow up and deal with the fact that (1) sometimes your coaches suck nuts and (2) it isn’t always about you.

This man went to Wake Forest, goddammit, and he's not about to write like a commoner. While he's a bit unhinged, you have to admit that this…

Jesus has sent you a friend request. Will you click "Accept" or "Not Now"?

…does not exactly scream Genius Warlord Of The Gridiron whether you're religious or not. Jesus is old, dude, and probably isn't even on Facebook. Maybe Friendster. 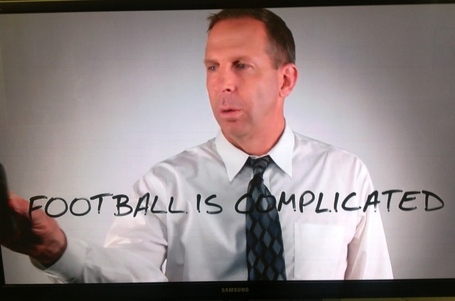 Back to these nimrods. NEBRASKA led UCLA 21-3, watched the Bruins run off 38 straight points to win 41-21 as their defense gave up more than 500 yards yet again, and then found out that their coach said they could all f--- off and die a couple years back. Oh and Tommie Frazier said Bo Pelini should be fired. Getting a Callahan vibe going on here.

Nebraska fans are famously nice, so it starts with derangement.

Looked out the window

and squirrels are running everywhere with ears of field corn in their mouths, dropping them all over the lawn. I hate being taunted by squirrels.

Who's left that can beat Bama?

Ohio State too much for Cal

It moves on to boycott.

I went to this monstrosity of a game

because I was offered a free ticket. I’m glad it was free, because I won’t spend another thin dime supporting this program until Bo Pelini and his cast of incompetents are all given pink slips. I don’t spend enough to make the University sweat in any real shape or form, but it’s the only thing I can do. I’ll root for the team to win, but I’m sure as hell not going to become financially invested in this shitshow.

Then you start taking it out on your family.

I had a nuclear meltdown

Family is keeping a very far distance. Poor dog is hiding. Took anger out on lawn and brush. At least yard now looks good, so I got that going for me, which is nice.

And finally, you reach rock bottom.

Look around, survey the devastation. Wait, there's a door down here. There's a basement at rock bottom. It is a poem.

An ode to LLLL

The coaching staff rather sucks.
Get some staff from Oregon Ducks.

The team’s attitude seems rather manic,
at the slightest hiccup they start to panic.

The defense needs to EXECUTE,
The OC to stop being so cute.

We’re tired of hearing about the PROCESS.
We want to see some tangible PROGRESS.

If rock bottom has a sub-basement I don't want to look at it, for fear of going insane.

Welcome back, PENN STATE. After a year of TWIS moratorium since you guys had already suffered enough, a 34-31 loss to UCF and gunslinging Blake Bortles is enough to prompt a brief, friendly note here:

At least I don’t have a 20-hour drive home tonight.

Good luck. This might be the beginning of a nasty cliff.

Also, since we highlighted Michigan State after a couple of grim victories it's only fair to drop MICHIGAN in here after a harrowing 28-24 win over Akron, a team that was 1-11 the last three years. Let's get our overreact on:

This team is more worrying than 2008 and more disgraceful than 2007. I hope they have lots of stairs to run and 5AM workouts this upcoming week.

Michigan was 3-9 in 2008 and opened up 2007 with back-to-back losses to Appalachian State and Oregon.

That's my blog and I have no idea what he's talking about.

Beefsupreme: ARG! My wife and I left our 7 week old son and drove 4.5 hours each way to watch THIS game. At least we won. I have acid reflux.

M-Dog: You still did not escape seeing a load of poop.

Mack Brown apologizes for 66-17 loss to OU next month

"I want to apologize to all Texas fans in advance," said a visibly-shaken Brown.  "66-17 is unacceptable.  I'm as disappointed as anybody about how the team will play against Oklahoma on October 12. But you can't look back at next month's loss and torture yourself with ‘What ifs?' You have to move on."

Users have moved on to metaphysical discussions as they wait for the sword to fall on Brown:

between "Quit" and "No discernible improvement while matriculating."

And proving that they are not English majors.

TexasT76: This is the way the world ends…not with a bang, but a whimper.

And speculating on promoting Greg Robinson.

Clearly, the only on-staff choice for an interim gig is

Greg Robinson. Head coaching experience, not postponing his future, and he’s already demonstrated that he’ll take a check to shovel manure for a few months.

Everyone in the league won except Colorado, which saw its game postponed because of torrential flooding in Boulder. Everyone except UTAH, that is, and the Utes lost on this brutal play:

Just when this damn team grabs me by the balls and says "be a good fan", it just f---s me up

This guy was actually wise:

I gave up hope after the field goal. I'm not even angry just hollow.

A lawyer is our secondary coach, the past two years really shows that he knows what he’s doing.

TENNESSEE played Oregon, much to the chagrin of everyone. Hunter orange meets fire truck neon green, and eyes suggest you look at the sun thing instead. Tennesee met the fate that you do when you're a team that still has no concept of what a force player is (ask Georgia running backs about last year's UT game if you want them to buy you some ice cream), losing 59-14. I've been there. Not quite as bad, but Dennis Dixon… I don't want to talk about it. Neither should Tennessee fans:

I just hope none of you called a radio show drunk and crying tonight.

OrangeWayOfLife: Were used to losing. Sadly.

Tennesssee is one of those fanbases that rushes to youtube to post vlorgs or whatever in the run up to and aftermath of every game, saying things "I think we need some faster bricks" and whatever this is:

Man pours koolaid, wears Eyes Wide Shut mask, asks "you ever wonder why they don't have the mercy rule in college football?"

What a terrible dissapointment

All I asked for was that we fought hard and didnt look stupid like last year. I guess that was too much to ask.

volnation needs to be cut off.

It has become obvious to me that our fanbase must be collectively hammered right now. There is some real gold poppin up on here. So I ask you what are you drinkin an what number is it? I'm doin green label bout to put down number 9.

I only drink for celebratory occasions. Needless to say I quit drinking about 7 years ago.

well,I'm beered up pretty good,I say we all get together and burn some mattresses

TEXAS A&M lost in a thrilling shootout to Alabama, but does not feature here because this is the general tenor of discussion on TexAgs:

Is Johnny a witch?

On another team's website, this was postulated as a possibility after JFF used some sort of black magic to escape the bama rush and complete a the first down pass.

I'm not saying he "is" or he "isn't", but if this was Salem a couple hundred years ago, I think we'd need to worry more about him being burned at the stake than declaring for the draft.

Wags immediately suggest that they compare his weight to a duck to find out.

NEXT WEEK: This column focuses on you, the viewer, since there is one top 25 matchup. I guess someone has to lose Tennessee-Florida and Notre Dame-Michigan State, but looks like this column is pulling for IT CAME FROM THE FCS II.

• Pretty much everyone agrees Wisconsin-Arizona State ending was botched