Clemson at NC State preview: Are the Tigers really good enough for No. 3?

Clemson has jumped from eighth to third in the AP poll after two games. The defense still bears obvious burden of proof, but the offense also has some questions, particularly on passing downs. Thursday night in Raleigh, we might get answers.

Share All sharing options for: Clemson at NC State preview: Are the Tigers really good enough for No. 3?

After three weeks, we're all still guessing at this point. Our impressions of teams are still grounded partially in preseason narratives and projections, as evidenced by the fact that eight of the teams currently in the AP top 10 were in the top 10 at the beginning of the season. (The "new" teams: No. 6 LSU and No. 8 Florida State, who were 11th and 12th, respectively, to start the season, and who have spent much of the last decade or two among college football's elite.) 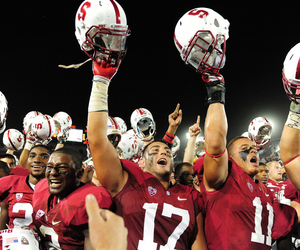 There has at least been a little bit of shuffling to date, and thanks to its home win over No. 9 Georgia, Clemson has hopped quite a few undefeated teams to currently reside at third in the AP poll, just ahead of No. 4 Ohio State. The Tigers' toppling of the Dawgs proved to many that they are ready to play elite ball on both sides of the field and are mature enough to avoid stepping on random road land mines against lesser teams.

Nevermind the idea of "Clemsoning" for a second, however. Is Clemson really good enough to be considered a top-three team at this point? The win over Georgia looked good at the time, then looked better when Georgia took apart South Carolina the next week, but are the Tigers really better than Ohio State, Stanford, LSU, et cetera? And are they good enough to take down teams like Florida State at home and NC State and Maryland on the road?

The latest iterations of the F/+ rankings, still incredibly volatile with minimal data, slots Clemson in at No. 24, just ahead of Arizona State and Miami and behind Ole Miss, Utah State, and Washington. The numbers view Clemson as perfectly solid but far from elite. This was also the case last year, when the 11-2 Tigers finished 11th in the polls but just 22nd in the F/+ rankings.

What's holding Clemson back from a numbers standpoint so far? Well, defense, for one. Clemson made enough stops to get the win against Georgia but still allowed points and yards, and this early in the season, with opponent adjustments far from perfectly sound, raw data still carries weight. (That's why Alabama sank like a stone in the defensive ratings following the Texas A&M game.) The defense looks exciting and potentially improved, but we don't quite know enough yet to confidently make that claim, and the numbers are certainly reserving judgment.

Are the Tigers really better than Ohio State, Stanford, LSU?

But the offense has question marks as well, and that's not necessarily something we've acknowledged at the moment. Clemson averaged 6.1 yards per play against Georgia, healthy but perhaps not quite elite, then sleep-walked a bit through the 52-13 win over South Carolina State in Week 2. A pair of pick-sixes boosted Clemson's lead (38-7 at halftime), but the offense only averaged 5.7 yards per play in the first half and 5.4 for the game, and considering Clemson's No. 3 ranking is based heavily on offensive prowess, there are some issues that need addressing.

DeAndre Hopkins was one of the more under-appreciated players in college football last year. We certainly appreciated him, but I'm not sure we completely grasped how incredible his numbers were as he was posting them. The assumed No. 2 receiver for Clemson heading into 2012, "Nuk" seized control of the go-to role as Sammy Watkins struggled with suspension and injury. And while he was certainly good on standard downs (9.6 yards per target), he was potentially the nation's best receiver on passing downs. He caught 33 of 55 passing downs passes in 2012 (60 percent catch rate) for an incredible 704 yards (12.8 per target, 21.3 per catch).

Tremendous receivers like WVU's Tavon Austin (8.0 per target), Arkansas' Cobi Hamilton (7.3), and Tennessee's Justin Hunter (5.9) found life rather difficult on passing downs; Hopkins did not. Even against elite teams like South Carolina, Florida State, and LSU last year, quarterback Tajh Boyd was able to consistently rely on Hopkins to get to the sticks, turn and catch the ball. In those three games, Hopkins caught nine of 20 passes for 200 yards on passing downs. (Sammy Watkins in those same games caught four of nine passing downs passes for 35 yards.) Seven of Hopkins' nine catches were of balls thrown past the first-down marker, the most famous of which was his 26-yard, lunging catch on fourth-and-16 late in the LSU game.

We probably didn't talk enough in the offseason about the impact Hopkins' absence might have in this regard. The ability to catch up after falling behind schedule in a given drive is an incredible luxury. Clemson's offense ranked 18th on standard downs last year (very good) and second on passing downs (elite), primarily because of Nuk.

Through two games this year, Clemson ranks 35th in raw Standard Downs S&P (unadjusted for opponent) but an alarming 92nd in Passing Downs S&P. It's early, of course, and one good game could turn things around in this regard, but it would make sense that the Tigers could be struggling. Against Georgia, Clemson's passing-downs success rate was just 20 percent on the ground and 36 percent via pass.

Watkins caught just two of six passes for 18 yards in this sample, and really only two passes -- one to Watkins and one to Charone Peake, who has since torn his ACL -- found their marks downfield; otherwise any success Clemson found was via short pass and run. It's difficult to beat really good defenses this way, and it's difficult to move the chains against even a fired-up middle-tier opponent on the road this way. And of those middle-tier opponents, a few rank pretty well so far in terms of passing-downs defense: Maryland is 12th, Syracuse is 20th, and Thursday opponent NC State is 37th. 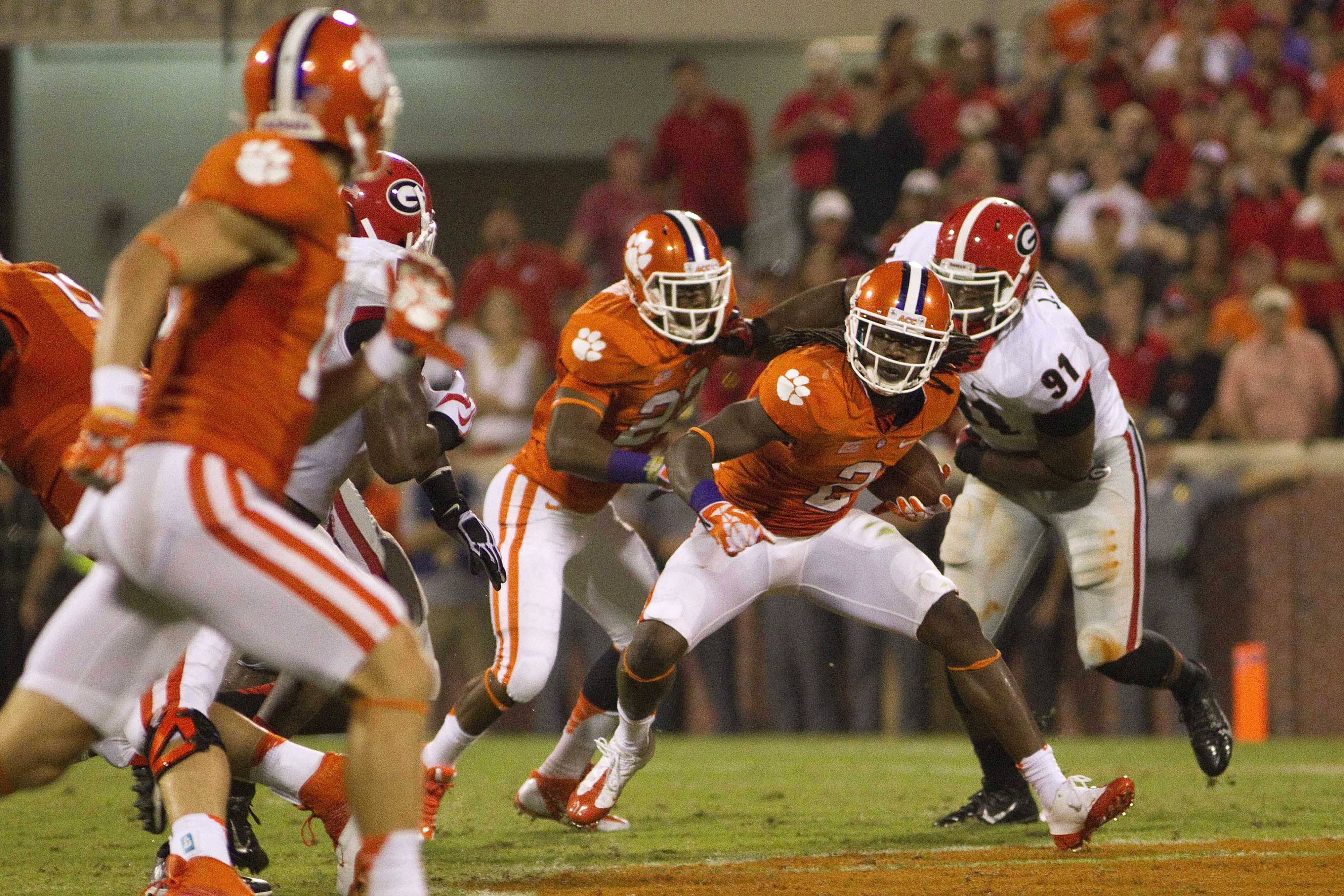 From the four-skill-positions look -- usually one back with three receivers lined up wide, sometimes two and two -- Clemson ran the ball 84 percent of the time. So much of football is about numbers and advantages, and when the Tigers needed to run the ball, they wanted to do so with an extra blocker. Chad Morris decided it was worth it to be more obvious in these situations. And he was usually wrong. On all but one of these plays, operated in both short- and regular-yardage situations, Clemson averaged just 3.0 yards per play with the extra blocker. The other play, a play-action pass over the middle to Sammy Watkins, went for 77 yards and a touchdown.

Sammy Watkins may not be one of the nation's best weapons on passing downs, but he's still Sammy Watkins. And just when you think you have a solid read for what the Clemson offense is going to do, the Tigers counter with a big play.

Again, we're just guessing at this point. We're taking our preseason questions and applying small-sample clues to find our answers. But it was reasonable to suggest that Clemson would struggle to adjust to life on second- or third-and-long without DeAndre Hopkins. Against Georgia and, to a lesser extent, S.C. State, the Tigers did just that. It's something to watch.

Of course, struggles on passing downs are only an issue if you are facing a lot of them. Against Georgia, Clemson pulled off gains of 15 yards or more six times on first-and-10: a 36-yard rush and passes of 16, 17, 25, 31, and 77 yards. With offensive coordinator Chad Morris, Tajh Boyd's running ability and toughness, the Boyd-to-Watkins combination, and solid (thus far) pair of running backs in Roderick McDowell and Zac Brooks (combined: 39 carries for 226 yards), Clemson can still kill you in a lot of different ways.

Clemson's offense is going to be very good no matter what. But at No. 3 in the country, we're saying that either Clemson's offense is elite or its defense has improved to top-20 caliber. That the Tigers have gone three-and-out nine times in two games is disconcerting and puts a lot of pressure on the defense to not only sustain the big-play ability it has shown thus far (17 tackles for loss, three forced fumbles, three interceptions, seven passes broken up) but avoid wearing down late in a given game.

Clemson will probably beat NC State in Raleigh on Thursday night, but the game will represent a lovely test of the Tigers' capabilities. Though the level of competition has been far from incredible (Louisiana Tech, Richmond), the Wolfpack have proven capable of not only making stops on passing downs but also keeping drives going on offense via the pass. State ranks 20th in Passing S&P and 15th in Passing Downs S&P (again, unadjusted for opponent); Colorado State transfer Pete Thomas has completed 67 percent of his passes, and the combination of freshman Marquez Valdes-Scantling (14 targets, 12 catches, 174 yards) and senior Rashard Smith (14 targets, 12 catches, 145 yards) has been surprisingly potent thus far.

The Wolfpack still can't run, and that should result in quite a few passing downs (and even when you're good at converting them, you still don't want to face many) and eventual demise. But Clemson will have to play well to win, and if the Tigers really are the third-best team in the country, they'll do so.

• Pretty much everyone agrees Wisconsin-Arizona State ending was botched