2013 bowl projections, Week 5: Alabama-Oregon still on, Baylor to the BCS

Updated projections for all 35 bowl games after Week 4's action see a juggernaut of an offense join the BCS mix.

Share All sharing options for: 2013 bowl projections, Week 5: Alabama-Oregon still on, Baylor to the BCS

Four FBS teams scored 70 or more points on Saturday. Three of them -- Louisville, Miami, and Ohio State -- did so against hopelessly outmatched competition. The fourth won 70-7 against a preseason conference favorite, experienced bowl team, and upset specialist.

Baylor did to ULM exactly what it did to Wofford and Buffalo before it, continuing a scorching run that includes last year's wins against then-No. 1 Kansas State, Oklahoma State, and UCLA. While that list of victims might not impress some, I'm seeing only one potential loss in the Bears' next four games (West Virginia, at Kansas State, Iowa State, Kansas).

Baylor should be 7-0 heading into the heart of its schedule, in which two of the toughest four teams it'll play all year come to Waco. With this firebomb of an offense, a still-improving defense, and a schedule that allows for even more ball-of-knives momentum, Baylor will win its first conference championship since before the Big 12 existed and capture its first BCS bowl bid. I think.

The rest of this week's updated bowl projections:

* Team taking a spot from a conference that couldn't fill all its own.

? You tell me who else is getting six wins. 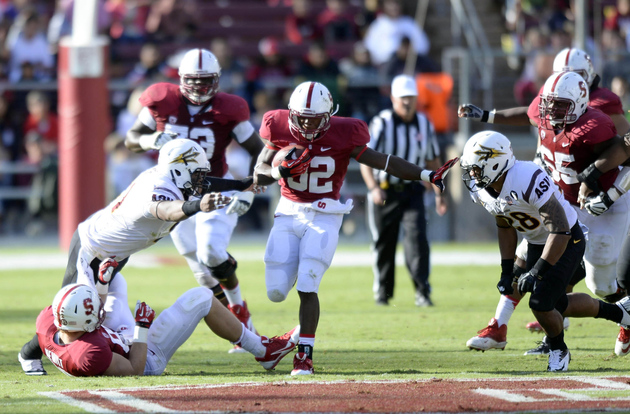 As always, bowl slotting doesn't necessarily equal a final standings prediction. Most bowls are more or less free to invite whichever qualified teams they want. They aren't all tied to specific spots. For example, Texas is below Kansas State, which just lost to Texas. The thinking: Texas will be in the middle of a coaching change, which won't make for a very fired up fan base.

Alabama continues to look less and less like a sure thing, struggling in a range of ways in all three games so far, but I don't see a reason to pick anybody over the Tide yet. Let's talk about that again after we see LSU and Georgia play (and see whether Ole Miss can also challenge Bama). On the other side, the only concern regarding the Ducks is Stanford. Either is good enough to beat anybody.

The Sugar and Rose get first picks in this scenario, and each should have a good choice from its traditional conference ties. Georgia and Stanford replace Alabama and Oregon.

The Orange goes next. I'm projecting Big 12 runner-up Oklahoma State, American champion Louisville (which earns an automatic BCS spot due to its conference, but doesn't have a designated place to play), and a one-loss Florida State to be the likeliest teams to join. Though it's time to keep an eye on Fresno State, which could enter the top 25 after downing Boise State on Friday, and only needs to reach No. 12 in the BCS (or 16, if an AQ-conference champ ranks below 16) to ruin somebody's holiday season.

Let's say the Pokes' high-powered offense makes for an attractive pairing with Clemson and big TV draw FSU makes for a Mark Richt reunion (due to the Orange passing on a FSU-Clemson rematch). This means the Fiesta gets stuck with two of the country's best offenses, maybe the country's two hottest names in the coaching rumor mill, and maybe the No. 1 NFL Draft pick. Turns out well for everybody.

Notre Dame doesn't have an actual bowl tie this year, so it's BCS or slummin' for the Irish. The Heart of Dallas offers a January date and a trip to Texas, where Notre Dame wants to spend a lot of time, plus a matchup against a BCS-conference team. The Irish might opt for the Pinstripe instead. Notre Dame can go wherever it wants, among the bowls with vacancy.

I'm not happy about where Michigan State winds up here, but navigating the many Big Ten-SEC bowls every year means somebody winds up somewhere lackluster. The Spartans also have to avoid a return trip to Phoenix. Well, they don't HAVE to, since Phoenix is okay. But a rematch of the TCU-Michigan State bowl from last year is a pain to swerve around. You think the Wild Wings would rather have TCU or Michigan State?

Most of the January slate looks good. I'm thinking Johnny Manziel and Jadeveon Clowney will both be names big enough to get their teams better bowl positioning than they might land otherwise.

Jewels of wonder elsewhere, for those who like points-related excitement, could be Utah State-Arizona, Auburn-Maryland, and Texas Tech-UCLA. I am not jacked up about Boise State-Navy.

Also, what if Tommy Tuberville leaves Cincinnati to coach Vanderbilt at halftime?