Why Virginia Tech is wearing these hideous 'Hokie Stone' helmets

Virginia Tech thought its cool campus stone was a good enough reason to make a helmet that appears to be made out of a wall. Georgia Tech has throwbacks too, but they get a pass based on the relative atrocity on the other team's heads.

Share All sharing options for: Why Virginia Tech is wearing these hideous 'Hokie Stone' helmets

Thursday night is the annual Battle of the Techs, a silly name for a game that's held relative importance in whichever ACC division Georgia Tech and Virginia Tech are a part of. (The winner of the game went to the ACC Championship Game every year from the time divisions were introduced until last year, when the 6-6 Yellow Jackets went to the championship game despite losing, on account of Miami and North Carolina both being ineligible.)

The important thing: both teams are dressed unusually. First up, Virginia Tech with ... oh, no:

That logo is the school's logo, meant to resemble the pillars of the War Memorial Chapel. The logo is fine. It's the stones that are not fine.

First off, this is just a helmet that's been painted. It is not actually made of stone, because everybody's heads would be too heavy to play football.

Second off, these are not, as our Bill Hanstock guessed, inspired by The Thing. It's based off Hokie Stone, a signature limestone-dolomite mix quarried near Blacksburg and used in all buildings on campus. The players even touch a Hokie Stone before coming out on the field.

Of course, having pretty stones as part of your campus' architecture is not a good enough reason to design this horrifically ugly helmet.

Not to harp on my school, but as luck would have it, Northwestern's campus also prominently features a local limestone-dolomite mix: the same Joliet-quarried rock seen in Chicago's landmark Water Tower was also used to build several of the earliest buildings on campus. When Under Armour designed the team's new jerseys in 2012, they featured this prominent Northwestern style by putting a stone pattern on the numbers on the team's uniforms. It's a subtle touch that gives the uniforms a mottled hue while serving as a visual cue card for the Northwestern community.

It looks nicer than, say, making a damn helmet that appears to be built out of stone. Virginia Tech busted out ugly grey alternates for the team's opener against Alabama, they wore ugly forest-fire camo jerseys for last week's triple overtime win against Marshall, and now they have ugly Stone Age helmets, a third gross uniform in five games. Their jerseys are trying to murder our eyes and finish the job Frank Beamer's offense started, and I can't say I appreciate it. There was also this last year. And these Gobbler helmets.

Georgia Tech, on the other hand, will be having a whiteout to commomorate the 100th anniversary of Grant Field: 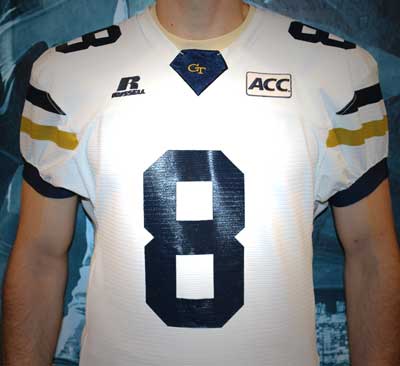 They're basically the most basic uniforms possible. And that's okay, in comparison.