Wisconsin at Ohio State preview: Gordon vs. the edge and Miller vs. Guiton

Wisconsin has enough strengths to give itself a chance even on the road, and if the Badgers don't do the deed, it's unclear whether anybody will. (8 p.m. ET, ABC.)

Share All sharing options for: Wisconsin at Ohio State preview: Gordon vs. the edge and Miller vs. Guiton

From a rankings perspective, the biggest game of the college football weekend takes place in Athens, where No. 6 LSU visits No. 9 Georgia. But that game doesn't necessarily have the largest impact on the national title race; if LSU loses, the Tigers can still beat Alabama and Texas A&M and resume their prominent role in the BCS hunt. Instead, the game with the most title implications could be played in Columbus.

Somehow, Ohio State has managed to craft a schedule with only one top-25 opponent, according to the current F/+ rankings. The Buckeyes do have to travel to face No. 32 Michigan and No. 44 Northwestern, but the single best team remaining on the regular season slate is No. 23 Wisconsin, which visits the Horseshoe this weekend. If Ohio State wins on Saturday, the odds of the Buckeyes finishing the season with even a single loss drop a good amount.

Wisconsin is certainly flawed. The passing game isn't amazing, and the Badgers' defense could stand to be a little more efficient and capable of forcing passing downs. But from top to bottom, this is the best team on Ohio State's weak schedule. Can the Badgers pull the upset?

Key stats when Wisconsin has the ball 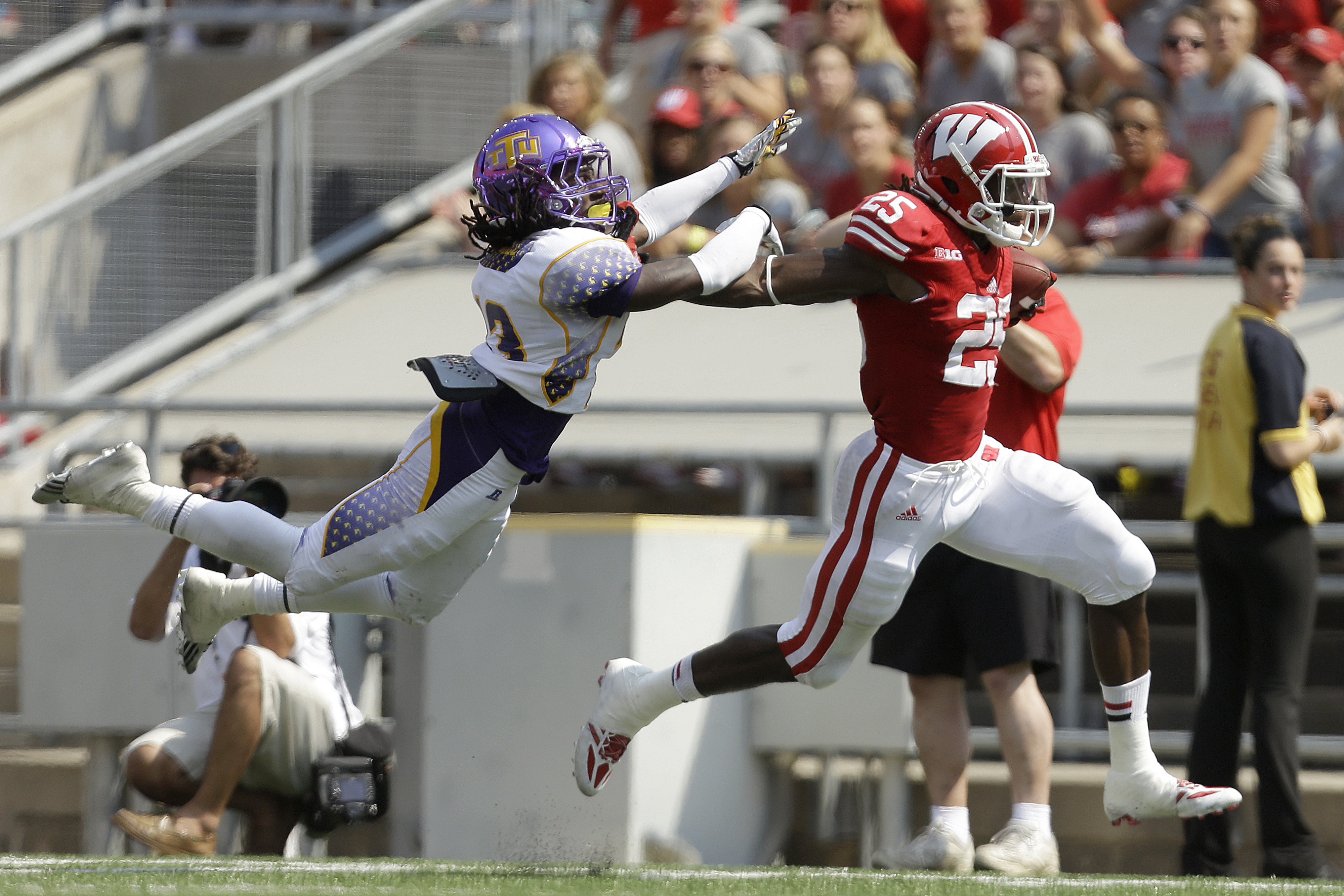 Pct. of passes defensed (intercepted or broken up): UW offense 32.4 percent, OSU defense 38.3 percent. National average: 33.6 percent. Passes defensed can be a good way of gauging the athleticism of both a receiving corps and a secondary. It's a way to look at how well receivers are getting open. (Yes, it's also a look at how well defensive linemen bat passes down; it's not perfect.)

The Badgers soften you up between the tackles, and when you lean toward the middle, they gash you with a perfectly-timed jet sweep to Melvin Gordon. This is about as complete and diverse a running game as you can put together when you a) don't have a very mobile quarterback (Joel Stave has carried seven times for 14 yards) and b) aren't running the Flexbone. Wisconsin will find and exploit whatever weakness you may have near the line of scrimmage.

And it's certainly worth noting that Ohio State might have some weaknesses near the line of scrimmage. That's what happens when you are forced to replace almost all of your front seven. The Buckeyes returned only 24 percent of last year's tackles, and 20 percent of tackles for loss, on the line, and Ryan Shazier was the only returning linebacker who logged more than 5.0 tackles in 2012.

In terms of raw stats, Ohio State's defense has fared just fine so far in 2013. The Buckeyes are 11th in raw S&P (unadjusted for opponent), 13th against the run, and 16th against the pass. But they've also faced Buffalo (114th in Off. S&P+), San Diego State (120th), California (48th), and Florida A&M (Florida A&M). Cal has some offensive strength, but not really on the ground. Success against these offenses is better than failure, but it doesn't really prove much.

To date, the middle of Ohio State's defense has been the most successful. Ignoring the Florida A&M game (because not much can be gleaned from a glorified scrimmage), Buffalo, SDSU, and California rushed up the middle 30 times and gained just 75 yards in the process, an average of 2.5 yards per carry. They averaged just 3.4 yards per carry off tackle, as well. It seems the Buckeye defense has held up and maintained its discipline from tackle to tackle rather well.

But opponents have had a little bit of success on the outside. Cal carried nine times for 64 yards on what were categorized as "off end" runs, and SDSU gained 37 yards in six such carries. The three real opponents have averaged 6.1 yards per wide carry in all. And in Melvin Gordon, Wisconsin has perhaps the best "off end" runner in America; can Ohio State slow Gordon down on the outside without compromising its integrity between the tackles?

Without the threat of Gordon on the outside, Wisconsin's offense dries up pretty quickly. The Badgers basically have one receiver -- Jared Abbrederis has been the target of 40 percent of Wisconsin's targets thus far; among major-conference receivers, the only other members of the 40 Percent Club are USC's Marqise Lee (46 percent), Vanderbilt's Jordan Matthews (45 percent), BC's Alex Amidon (44 percent), and Kansas State's Tyler Lockett (42 percent) -- and Joel Stave has made some pretty sketchy reads at times.

Stave is still completing 63 percent of his passes with six touchdowns to three interceptions, and he's still averaging a pretty healthy 7.7 yards per pass attempt, but the mistakes, when he makes them, are bad enough to dampen the good moments. Ohio State opponents are averaging just 4.9 yards per pass attempt, and 23 of 60 opponent incompletions have either been picked off or broken up by an aggressive secondary. If Wisconsin has to pass, it probably won't be able to. And if Gordon isn't finding space on the outside, runners probably won't find much room on the inside either.

An injury to your star quarterback can derail a promising season instantly. No matter how good you are in other areas, no matter how star recruits you have on your roster, shaky quarterback play will finish you off quickly. In this sense, the loss of Braxton Miller to an MCL sprain in Week 2 could have been worrisome for Ohio State; it wasn't, however, because the Buckeyes have perhaps the best backup quarterback in the country in Kenny Guiton. An MCL sprain can impact both your ground explosiveness and your ability to plant and throw accurate passes. But because of Guiton, head coach Urban Meyer was able to take his time bringing Miller back, and indications are that Miller is nearing 100 percent at this point.

Key stats when Ohio State has the ball 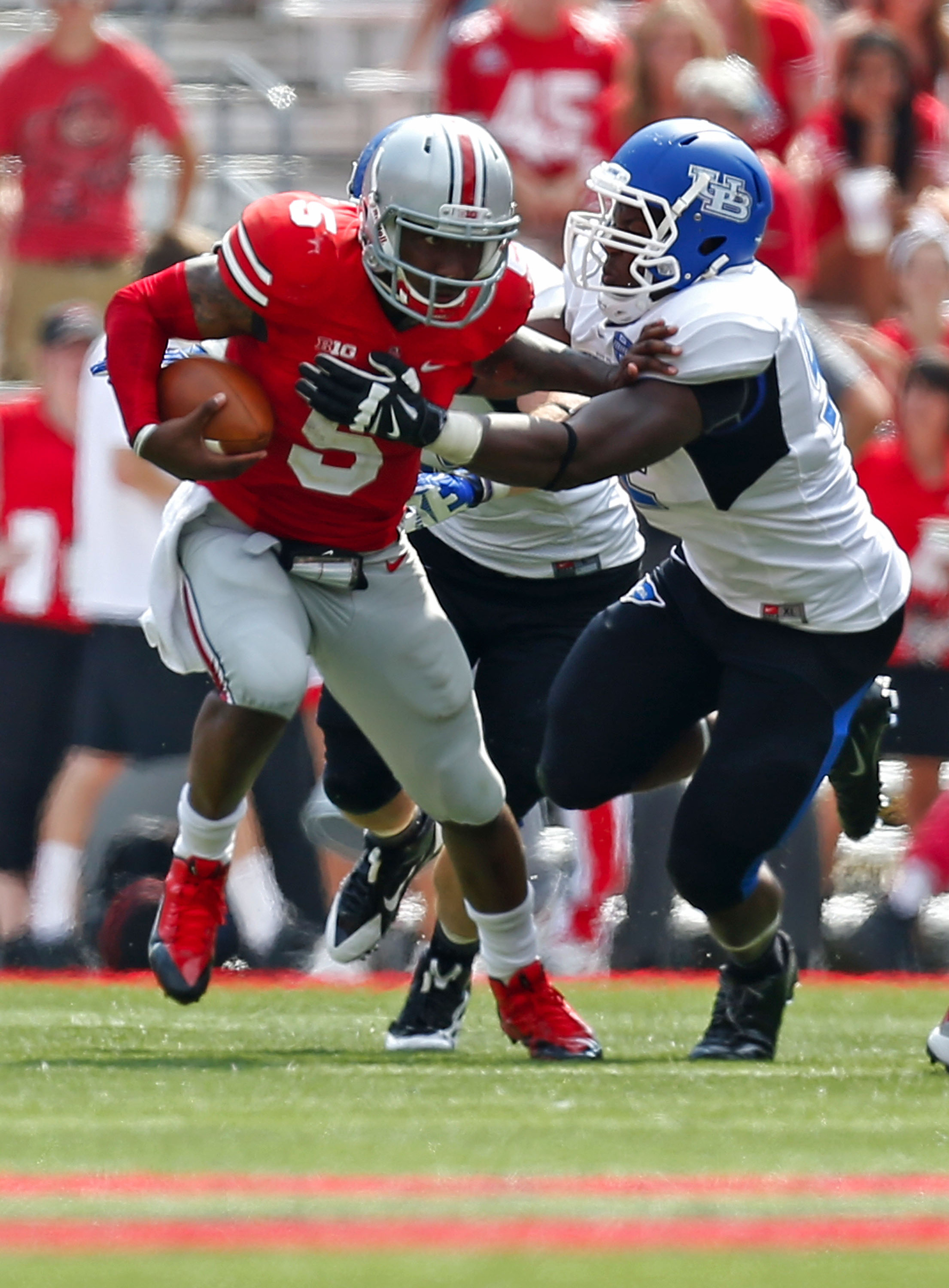 Highlight Yards: OSU offense 6.01 per opportunity, UW defense 2.96 per opportunity. Both Ohio State's runners and Wisconsin's tacklers are very good on the second level of the defense. If OSU is breaking off 11-yard runs instead of six-yard runs, the Badgers won't have much of a chance.

Guiton was so effective in his 3.5-game stint that he was listed as a co-starter this week as Miller approached full strength. Even if you filter out his stats against Florida A&M (and you should), his stats are virtually identical to what Miller was producing thus far in 2013. He was completing 67 percent of his passes at 7.2 yards per attempt; Miller was at 71 percent and 6.8. He was averaging 8.0 yards per carry (non-sacks); Miller was averaging 7.9. He takes far fewer sacks than Miller, as well.

If Miller struggles early against Wisconsin, it will be interesting to see how Meyer reacts, especially if Wisconsin is moving the ball pretty well. But while we can speculate about how much Guiton may or may not play, let's look back (with help from game-charting data) at Guiton's starting stint and how Ohio State's usage of Guiton differed.

Despite Guiton's overall success, however, there are signs that Ohio State coaches were playing it a bit safer with Guiton. On passing downs, the Buckeyes ran more frequently with Guiton behind center (33 percent to Miller's 26 percent), opting to put Guiton in fewer awkward situations; they also went no-huddle just 76 percent of the time on such downs (it was 95 percent with Miller). They gave Guiton a lot of one-read passes, frequently out of the no-back formation (19 percent of Guiton's passing downs were run out of no-back, as compared to five percent for Miller), and they were more prone to giving Guiton an extra blocker on the line on passing downs as well.

Ohio State's offense seems a bit more complicated with Miller in charge, for better or worse. Almost a full two-thirds of Ohio State's rushes with Guiton (63 percent) were zone-reads, for instance. But this simpler offense was also more effective. Ohio State was brutally efficient and more capable of avoiding negative plays with Guiton; Miller has always been a high-upside (oft-unstoppable run game), low-downside (lots of sacks) guy, prone to play-making escapades that often backfire. He hasn't played since September 7, and it will be interesting to see how Ohio State reacts if he starts slowly or shows a little more downside than upside early on. A strong backup quarterback is just about the greatest luxury a team can have, but if he's a little too strong, he can create a few awkward issues as well.

Ohio State is a touchdown favorite in this one, and for good reason. The Buckeyes could have enough run success on standard downs to avoid putting a rusty Braxton Miller into too many risky situations offensively, and if are able to generate even semi-consistent first-down stops, they should be able to bait Joel Stave into a bad throw or two on second- or third-and-long. But Wisconsin has enough strengths to give itself a chance even on the road, and if the Badgers don't do the deed, it's unclear whether anybody will.