Whomp on fools until nothing remains: Why Louisville's schedule is perfect

Ambitious Louisville fans are wishing their Cardinals' schedule wasn't so soft this season. Cards fan Jon Bois wouldn't trade it for anything else.

Share All sharing options for: Whomp on fools until nothing remains: Why Louisville's schedule is perfect

If you watched 24, and you knew what was good for you, you stopped watching after the fifth of its eight seasons.

It was always a fundamentally silly collection of Tom Clancyan pulp for the American Idol set, but it at least answered each of its dumbly implausible twists with an underpinning of logic that tried to keep our suspensions of disbelief in place. The First Lady just got stabbed in the stomach by a computer hacker in a dusty old warehouse, but the President is being removed from office by due process of the 25th Amendment. There is literally a fortress full of dozens of terrorists with automatic rifles in a nameless Los Angeles suburb, but when Jack Bauer infiltrates it and kills every last one of them, he does so with a realistic number of rounds in his clip, because junior, this ain't some kind of fairy tale.

The tail end of 24's run is a fascinating exhibit of what happens when a show's writers are transparently, and without question, completely out of any ideas, never mind new ones ... and then proceed to write 72 more hourlong episodes.

The show entered a sort of stupor. It wandered further and further away from the tenuous network of logic it used to care about. And that is how we arrive at the end of the final season, in which Jack Bauer becomes sort of a makeshift Batman, complete with a black mask and collection of destructive gadgets, and kidnaps President Logan.

That Bauer had already kidnapped Logan a few seasons earlier should tell you how completely out of ideas they were. It was perhaps the dumbest show in the history of dramatic television.

Predictably, though, I'm going to sit here and try to tell you that these seasons were miracles. It's like when your dad remodels the kitchen and he gives 8-year-old you a tack hammer and handful of nails to bang into some scrap wood, because he knows that's really all you want to do. So, I hope, is the 2013 season of the Louisville Cardinals.

In Saturday's opener, the Cardinals threw for 416 yards, ran for 199 more, and stomped the Ohio Bobcats 49-7. Meanwhile, six of Louisville's 2013 opponents lost their openers, three of which were complete blowouts. Of the 10 FBS teams left on the schedule, seven finished last season with losing records, and six of those were in not particularly great conferences.

I want to make clear that I am not guaranteeing, nor necessarily even predicting, an undefeated season. Rutgers or Cincinnati could beat Louisville, as they very nearly did in 2012. So, maybe, could FIU on the right day.

No, what I am doing here is rejoicing in the ease of this schedule, and in fact wishing it were even easier. There's a completely unserious but nonetheless real part of me that wants the Louisville Cardinals to decline any bowl invite they receive and content themselves with whomping on fools 56-9, forever and ever. 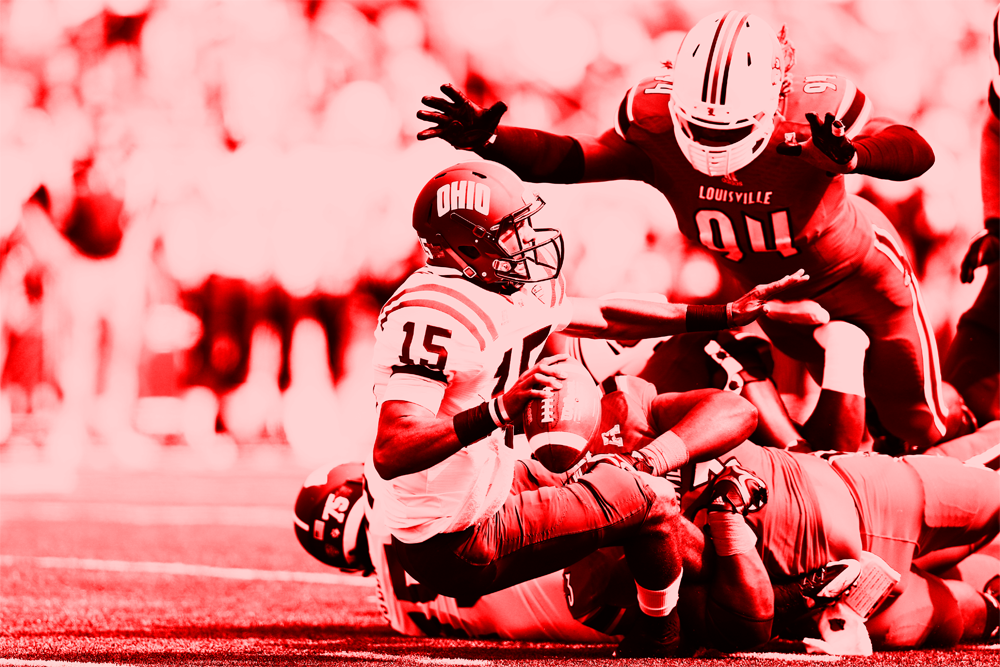 A schedule this mismatched is such a rare thing and can really only happen in the amateur ranks. For years, Boise State has been knocking around overmatched rosters in the WAC and Mountain West. TCU has had a taste of such dominance, as did Tulane one year in the late '90s. And now it's Louisville's turn.

We're watching a thunderstorm, and I don't know why you brought a telescope.

I understand why Cardinals fans are fretting over this too-soft schedule. In last year's Sugar Bowl, Louisville beat Florida by a 33-23 score that wasn't as close as it looks, and now they want Alabama or Oregon. That would be terribly exciting, even if I'm not terribly confident that Louisville would win more than once or twice out of 10.

There will always be opportunities, though, to march up that hill. In fact, Louisville figures to do that next year with their impending move to the ACC. That will come, and I reckon there's no sense in worrying over getting there right now when we could be appreciating this rare, ridiculous spectacle for what it might be: uninterrupted months of football annihilation.

In college football, as in just about every American enterprise, there's this impetus to move up, move forward, fall into a bigger pond: "We need to take the next step." I am speaking only for myself, but I'll tell y'all ... I am like most sports fans, in that I am used to losing and losing and losing. Suddenly I've arrived at a moment of my fandom in which I can drink a couple of beers and watch my quarterback rip apart a clueless defense, any defense, for 475 sky-yards en route to a 70-12 win, and you're telling me that this, somehow, isn't sufficient? I want for nothing. I don't need validation from the rest of the country. I don't need a damn thing else. Not now. We're watching a thunderstorm, and I don't know why you brought a telescope.

Like Jack Bauer's silly adventures, this arrangement is too unstable to last very long. As long as it does, I'll allow myself the simple joy of watching my team issue all this gorgeous destruction to a slate full of suckers. WHOMP.

• Taunting: Fine for Tim Tebow, not for Johnny Manziel